Officials now say more than 3 million have been affected and more than 1,400 killed by floods in northwestern Pakistan 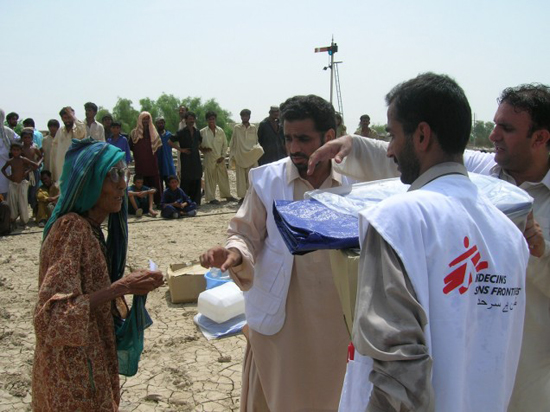 MSF teams distributing relief kits in Baluchistan to people displaced by the floods.

Officials are now saying more than 3 million people have been directly affected and more than 1,400 killed by the devastating floods in northwestern Pakistan’s Baluchistan and Khyber-Pakhtunkhwa provinces. Some areas are becoming more accessible due to the water receding. More rains are expected in the coming days, however, which could cause renewed flooding and create problems in areas that have up until now been unaffected.

At present, Doctors Without Borders/Médecins Sans Frontières (MSF) is looking to expand its provision of clean water and improve hygienic conditions among the displaced in order to prevent the spread of acute respiratory infections, diarrheal diseases, and skin infections. In addition to supporting basic health units in Mandrakhel, Wadpaga, and Gulbela in the Peshawar district, and the Paddi Hospital in the Nowshera district, MSF is working on setting up mobile clinics to provide primary health care and distribute non-food items. Thus far, MSF has distributed a total of 1,000 non-food item kits in Bhaktirabad and Fadfedar in Baluchistan province. More will be distributed in the coming days.

Other priorities include providing access to care for people with chronic diseases, referral to secondary-level care for complicated cases, and drug donations to hospitals. Assessments in the Khyber Pakhtunkhwa’s Swat, Dir and Peshawar districts, as well as in several places in Baluchistan, are ongoing. MSF teams are looking to move into the badly-affected North Swat region, but can’t cross a nearby river at the moment because its bridges have collapsed and other infrastructure has been damaged. The military is working on building a bridge to enable access to North Swat.

Teams are closely monitoring the situation concerning cholera outbreaks and are on standby to receive cholera cases in treatment centers in Dir, Swat and Charsadda districts. There is already one confirmed case of cholera in Swat.

A plan to use helicopters to further assess needs has been delayed but should be possible in the coming days. Meanwhile, 13 international staff are on their way to Pakistan today to reinforce the teams on the ground. A cargo plane will depart for the country at the end of the week carrying 50 tons of water and sanitation material, logistics material and cholera kits.