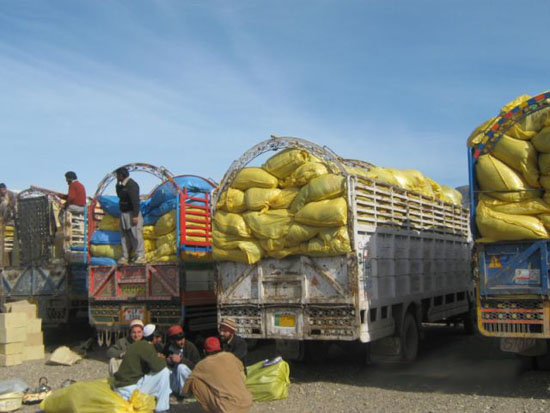 MSF has distributed living kits to more than 35,000 people who have fled the ongoing conflict in Kurram Agency.

Over the last couple of weeks, Doctors Without Borders / Médecins Sans Frontières (MSF) conducted a distribution of basic relief items to more than 35,000 people currently displaced inside Kurram Agency, in the Federally Administrated Tribal Area (FATA) of Pakistan. Since November 2009, Central Kurram Agency has been the theater of an intense armed conflict. One of the consequences for the local population has been to flee to safer places, notably to Lower Kurram, where MSF medical teams have been supporting the hospitals of Sadda and of Alizai since 2006.

“Around 35,000 people fled Central Kurram Agency and gathered in and around the town of Sadda,” describes Tommaso Fabbri, MSF Project Coordinator. “The majority of these displaced women, children and men are staying with host families who also live in difficult conditions and can’t cope with the new arrivals for a long time. Others have rented houses or live in schools, and a few of them are staying in settlements used in the past by Afghan refugees. Their living conditions are difficult adding to the stress caused by the ongoing fighting.”

Within nine days, the MSF team distributed relief items to 3,400 displaced families in and around Sadda, as well as in Alizai. This consisted of hygiene kits with soap and buckets, night kits that included blankets to help cope with the cold, and cooking kits. Rations of high-calorie-and-vitamin biscuit bars were also distributed to all women who were pregnant or breast feeding a newborn. “The main challenge for us was to organize efficiently a relief distribution in an area where the curfew drastically restricts the movement of our teams,” adds Fabbri. “Our team had to work in a very tense context and we had to delay our distribution for several days because of fighting near Sadda.”

The majority of the displaced staying in this zone does not foresee a quick end to their difficult situation, as fighting continues in their villages and their need of assistance, notably in terms of food, remains acute. “The situation in their villages remains uncertain,” says one member of the distribution team. “They told us that some members of the family stay in the village to take care of the house and that they have had no communication with them.”

MSF has been working in Kurram Agency since 2004 and is the only international medical organization providing free healthcare with a permanent presence in Kurram Agency. MSF offers outpatient paediatric services as well as maternal health care in Sadda and Alizai hospitals. Following the influx of displaced families, the number of paediatric consultations increased, from 1,200 per month to 1,200 each week. To increase our capacity to respond to growing medical needs, two more MSF doctors have already joined the team in Sadda and additional medical staff will follow in the coming weeks. MSF teams have also been providing consultations to displaced families arriving from Kurram Agency in Peshawar and Charsadda.

Since 1998, MSF has been providing medical assistance to Pakistani nationals and Afghan refugees suffering from the effects of armed conflicts, poor access to health care and natural disasters, and is currently working in NWFP, FATA, and Balochistan. MSF chooses to rely solely on private donations for its work in Pakistan and does not accept funding from any government.