Pakistan: In Munda, 2,100 Children Vaccinated for Measles; More Needs to Be Done For Those Displaced by Violence 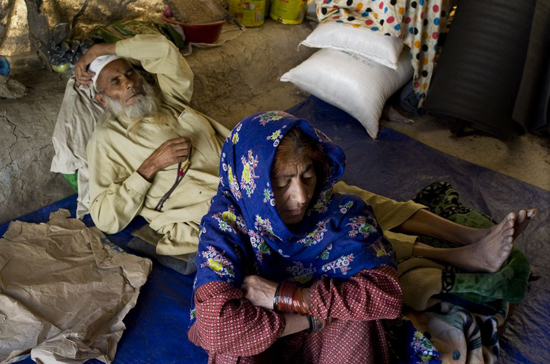 A husband and wife whose home was destroyed during a bombing raid have been living in a tent in Munda camp since mid-2009.

On Tuesday, January 12, in Munda, in Lower Dir district of the North West Frontier Province, Doctors Without Borders/Médecins Sans Frontières (MSF) and Department of Health staff started a measles vaccination campaign for the displaced population under 15 years of age. In three days, 2,100 children were vaccinated by three teams located in different areas around Munda camp. The vaccines and cold chain were provided by the Department of Health, and MSF teams conducted the vaccination.

Since November 2009, new waves of people fleeing violence in Bajaur Agency have arrived in Lower Dir, where MSF has been supporting internally displaced families staying in Munda camp and in a building in the marketplace area. Tents were set up to accommodate about 450 families in the camp. Access to clean water, latrines, and showers were also set up by MSF to help those families, as well as an additional 4,500 people staying in the marketplace better cope with their critical situation. Basic items such as blankets and cooking kits were distributed, as well. MSF medical teams currently provide free medical care to both displaced people and the host population of Munda, both of them being directly affected by the conflict. Currently, the displaced population represents up to 40 percent of the total population of Munda.

“In December, we carried out a rapid survey among the families to check their measles vaccination status,” says Dr. Ahmed Mukhtar, medical coordinator for MSF projects in Pakistan. “We found out that very few children had been vaccinated. Within a population weakened by poor living conditions and staying in very crowded places, an outbreak of measles can spread very quickly, and have severe health consequences, especially for children. For this reason, all children between six months and 15 years of age had to be vaccinated as soon as possible.” The vaccination was completed within three days, reaching a coverage of 76 percent.

Still, the living conditions of the internally displaced families who sought shelter in the marketplace continue to be very difficult. “This building currently shelters more than 4,500 people,” says Ahmed Mukhtar. “In an overcrowded space like this one, disease outbreaks can take place such as acute diarrhea and cholera. Furthermore, the building itself represents a safety hazard, as it is only half-built.”

MSF is currently looking into the possibility of opening a new camp in order to address the needs of the displaced . “There is an urgent need to set up a proper camp for these people,” adds Dr. Mukhtar. “This will help us arrange shelters for families and provide them adequately with access to clean drinking water, latrines and showers.”

As our teams continue to assist families in Munda that are displaced by the ongoing violence, MSF is likewise concerned about the situation faced by the population staying in neighboring Bajaur Agency, and is looking to assess their potential medical needs.

Since 1998 MSF has been providing free of charge medical assistance to Pakistani nationals and Afghan refugees suffering from the effects of armed conflicts, poor access to health care and natural disasters in NWFP, FATA, Balochistan and Kashmir.

MSF chooses to rely solely on private donation for its work in Pakistan and does not accept funding from any government.