Floodwaters have largely receded in the north and northwest, while MSF continues to assist displaced people in the Sindh and Balochistan. 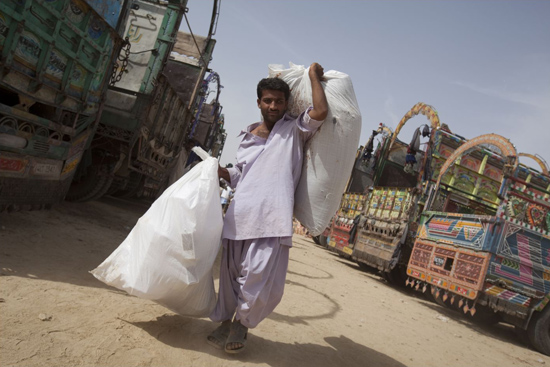 Since the beginning of the floods, Médecins Sans Frontières (MSF) has:

MSF has 125 international staff are working alongside nearly 1,200 Pakistani staff in MSF?s existing and flood response programs in Pakistan. Expenditures for the emergency response to the floods have reached approximately ? 7 million ($9.7 million). MSF?s 2010 budget for its normal operations in Pakistan is approximately ? 10.9 million ($15.2 million).

Ten weeks after the first floods hit Pakistan, the flood waters in Khyber Pakhtunkhwa and Punjab provinces have largely receded and people have begun to return to what remains of their homes. In Sindh and Balochistan provinces, Doctors Without Borders/Médecins Sans Frontières (MSF) teams continue to assist displaced people with not only immediate needs such as health care and clean water but also transitional shelters until their situation is stabilized.

Medical teams continue to run mobile clinic activities across Sindh province. In southern Sindh, in the districts of Jamshoro, Dadu, Johi, and Sehwan, the number of cases of Diarrhea and skin diseases (which were the main causes of morbidity at the beginning of the floods) have decreased significantly. However, the teams have been seeing an increase in the number of patients suffering from "general body pain" and fatigue (about 45 percent of the consultations). These symptoms are likely the result of the excessive stress that came with losing homes, poor access to food and safe water, and generally unhygienic living conditions in camps and shelters. Therefore, the team has started mental health activities, individual and group counseling, for almost 600 patients. In the district of Johi, more than 1,000 medical consultations have been conducted since the team started mobile clinic activities two weeks ago.

MSF medical teams also continue nutrition screening?using the mid-upper arm circumference (MUAC) test?and malnutrition treatment in both Balochistan and Sindh provinces. In Dera Murad Jamali, where the team is running five ambulatory therapeutic feeding centers (ATFCs), the number of children enrolled in the program increased significantly following the floods, due to either food insecurity or the addition of displaced people to the local population. 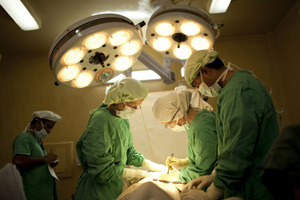 An MSF surgical team at work in Balochistan.

In the Jamshoro and Sehwan districts of southern Sindh, 2,289 children were screened with MUACs; 171 were severely malnourished and 334 were diagnosed with severe malnutrition. More than 160 children are being treated for severe acute malnutrition through the ATFC. Due to concerns about malnutrition, health promoters have changed their strategy from promoting knowledge on how to prevent acute watery diarrhea to raising awareness about nutrition.

MSF water and sanitation teams continue activities to reduce health risks for flood-affected communities. The teams in Dadu, Dera Murad Jamali, Lakkana, Jamshoro, and Sukkur districts are distributing at least 535,000 liters of safe water a day. In Sukkur district, the team continues to identify places to build latrines, hand washing points, and showers before it hands over its water and sanitation activities to Solidarite. In Jamshoro, health promoters and water and sanitation engineers are working in several communities to improve sanitation and waste management and to increase awareness about hygiene. The team is also working hard to provide safe water to two villages in Sehwan district that are still cut off from access to safe water.

In Saifullah Canal, near Dera Murad Jamali district, water pumps and more water storage points are being set up. Well-cleaning activities are also underway to meet the needs of the increased population in and around Dera Murad Jamali. In this area, the team has constructed 645 latrines, 170 showers, and 108 hand-washing points.

Many people have started leaving IDP camps and going back to their villages despite the fact that their homes were totally destroyed by the rains and floods. MSF plans to support families in southern Sindh by building 2,000 transitional shelters. The team will provide from 800 to 1000 shelters in Jamshoro and is assessing the needs for temporary shelters in Dadu . ?Since people keep moving everyday, it is quite difficult for us to have a complete picture of their needs,? says Elisabetta Maria Faga, MSF's emergency coordinator in southern Sindh. ?However, we are ready and we have the resources to provide about 1,000 transitional shelters in Dadu.?

Each transitional shelter will be 25-square meters, constructed from bamboo and plastic sheeting, and designed to last for one year. Reconstruction tool-kits will also be provided to families in need. The team will be doing this in consultation with community leaders. ?We need input from the local community as to what will be useful for them, since they understand their needs more than we do,? says Faga.

Now that the floodwaters have receded and the emergency phase of the response has been declared over, MSF has closed its emergency response activities in Punjab and Khyber Pakhtunkhwa provinces.

In Punjab, MSF closed an emergency response project in Muzaffargarh district, in the Tehsil Quarter Hospital of Kot Addu, which had been open since mid-August. MSF ran a DTC and treated 4,400 patients over the last 10 weeks. As the medical situation improved and the epidemiological situation held steady, MSF closed the DTC and handed over the medical wards to the Ministry of Health.

MSF also assessed the nutrition situation in and around Kot Addu before closing the activities. A nutrition screening was organized in Kot Addu town and nearby villages for more than 2,000. About 50 of them were treated for malnutrition.

Over the past month, 5,000 families in Punjab received relief item packages, and 2,300 families received tents. Water and sanitation teams also dug wells in three surrounding villages so flood affected families would have better access to water.

Since 1988, MSF has been providing medical assistance to Pakistani nationals and Afghan refugees suffering from the effects of armed conflicts, poor access to health care, and natural disasters in Khyber Pakhtunkhwa, Balochistan, Punjab, and Sindh provinces, as well as the Federally Administered Tribal Areas and Kashmir.