Battered by conflict in recent years, the Swat Valley is now struggling to counter the impact of devastating floods. 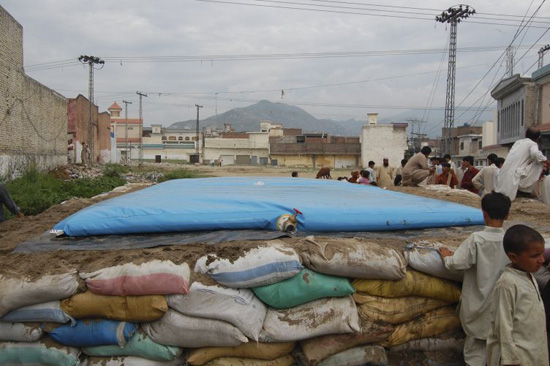 MSF has set up a water bladder in an area of Mingora, the capital of Swat, where most of the population of 400,000 have been left without access to clean water.

The Swat Valley was once known as the Switzerland of Pakistan, an alpine place where families would spend weekends walking in the mountains and picnicking on beautiful river banks. Since the 2008 conflict between militants and the army migrated into the region, however, the area has been tense and violent.

Some normalcy had returned of late, and the last thing the people of Swat expected was major floods. But Swat was not spared when torrential rains hit northwestern Pakistan almost three weeks ago. Massive flows of water washed away huge concrete bridges, roads, and buildings. 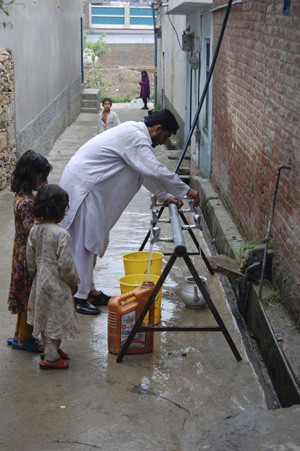 A man accesses some of the 200,000 liters of purified water distributed daily by MSF and other organizations.

The immediate impact has now been replaced by other worries, such as the spread of waterborne diseases. The floods destroyed the electrical networks, which means water treatment plants cannot function normally. In Mingora, Swat's capital, few of the 400,000 inhabitants have access to clean water. In a place where cholera is endemic, providing clean water to the population is incredibly important.

This is a priority for Doctors Without Borders/Médecins Sans Frontières (MSF)—in Swat, in the rest of Khyber Pakhtunkhwa province, and in other flood-ravaged regions of Pakistan. “We have identified a water spring and in agreement with the local community, we extract, filter, chlorinate, and distribute the water,” said Ms. Azzura Dinca, who is in charge of water and sanitation for MSF in Swat, noting that “200,000 liters of purified water is distributed every day by MSF and a whole range of national and international organizations.”

The water is delivered to tanks located in different parts of the city so people in all neighborhoods can access it. In addition to this relatively routine approach to water delivery in crisis zones, MSF is also relying on the communities themselves for assistance. “As some people in town still had access to their own water source, we offered to provide them with the use of a generator for a few hours in exchange that they share the water,” said Josep Prior Tio, who coordinates MSF’s activities in the Swat Valley. “The response from the community has been quite good, especially in neighborhoods of difficult access for water trucks. Mosques, schools, and individuals are now providing clean water to their local community.”

This solidarity illustrates one way residents have reacted to the floods. Many have given accommodation, food, and even, at times, money to neighbors and relatives who lost everything.

MSF is also focusing on preventing the spread of waterborne diseases. The number of diarrhea cases has already risen significantly, and without access to clean water, cholera can spread rapidly. When a patient with acute diarrhea is admitted at the hospital where MSF works, the medics and water and sanitation experts share information so they can map the places where people are getting sick.

“Once we have identified that a few cases come from the same neighborhood, we target that zone,” said Dinca. “For example, today we are installing a 15,000-liter bladder with taps in Tahir Abad, a poor and badly-affected neighborhood of Mingora. A few people from this area came to the hospital with acute diarrhea so we knew something was wrong there.”

Indeed, it was discovered that the wells had been polluted when floodwaters ravaged the area, forcing residents to walk long distances to fetch safe water.

In 2008, conflict caused similar conditions in the valley. During intense fighting between militants and the army, the electricity supply for about one million people was cut off. That same year, a cholera outbreak affected more than 4,000 people, and 2,500 were hospitalized.

“We are trying to avoid a repeat of 2008, by making sure the population in the most affected neighborhoods can access a minimum of safe water,” said Tio. “We’re preparing for the worst by erecting tents next to the hospital in case of a possible increase in diarrhea or cholera patients. But we hope that we won’t have to use it so much. Ironically, we used the same tents at the same place for a different medical emergency, to treat injured people during the 2008 fighting.”