Pakistan: Tending to the Displaced in southern Sindh province

MSF’s priority has been to provide flood-affected populations with access to health care free of charge, clean water, and essential items such as cooking kits, hygiene kits, and tents. 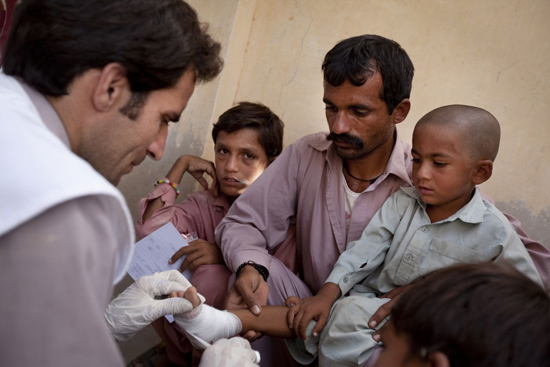 A boy is tended to at an MSF mobile clinic in Sindh.

Three months ago, 15-year old Mohammed Khan* was enjoying his summer holiday and looking forward to starting tenth grade come autumn. But then torrential rains hit Pakistan, unleashing massive flows of water that washed away his village, Khaipur, and changed his life, along with the lives of millions of other Pakistanis.

Fleeing their collapsed house, Mohammad, his parents, and his eight siblings joined the 6,000 internally displaced people who have taken shelter in the Shahbaz Colony Camp, in the town of Jamshoro in Sindh province. Mohammad had to put aside his school plans and instead started working in a small convenience shop in the camp. He considers himself luckier than his new neighbors, however. “We have this shop to earn money but our neighbors have nothing to do,’’ he says.

Following the floods, Jamshoro has become “home” for nearly 43,000 people, most from the surrounding villages of Dadu, Khaipur, Jacobabad, and Sehwan, and now live in makeshift shelters in camps or on any dry, open space they could find. It’s a bitter irony that these people fled floodwaters only to now find themselves in a barren and parched landscape where the sun beats down mercilessly even as summer nears its end. Every day, dust storms and strong winds blow into tents and shelters that offer little protection. Some families have taken refuge in an abandoned housing settlement, but they have no access to running water. They must instead depend on regular deliveries made by tanker trucks sent out by Doctors Without Borders/Médecins Sans Frontières (MSF) as part of the organization’s response to the flooding.

“The water took away everything we had,” says Nabila Adwani, who was waiting to be assessed at an MSF mobile clinic because she’d been suffering gastrointestinal problems. “Now we do not have a house, land to farm or any of our cattle. We do not know what to do and where to go.”

In the aftermath of the floods, MSF’s priority has been to provide the flood-affected population with access to health care free of charge, clean water, and essential items such as cooking kits, hygiene kits, and tents. In and around Jamshoro, MSF provides health consultations and treatment through mobile clinics and Diarrhea Treatment Centers (DTCs).

For the poor, health care was already in short supply; the floods only exacerbated the shortcomings. A consultation in a private health clinic usually cost at least 300 rupees (around $4), which is well beyond the means of most people in the camps. But more people now need medical attention given the critical lack of proper shelter and safe water and the overall unhygienic living conditions. “I have been sick for five months and I do not have enough food for my six children, let alone paying to see the doctor,’’ says Aamila Bodani, one camp resident.

On a recent day, an MSF medical team in Shahbaz saw more than 100 patients in just two hours. Most were plagued by skin diseases, diarrhea, and eye infections. The team is also screening for malnutrition among children under five and pregnant and lactating women, providing high-calorie biscuits to those who need them. Overall, two MSF mobile clinics have provided more than 4,000 consultations in and around Jamshoro since the onset of the emergency in Sindh.

In Sehwan, 120 kilometers (72 miles) north of Jamshoro, MSF has opened a new DTC to treat and prevent an area-wide outbreak of acute watery diarrhea. “Sehwan is densely populated and we have discovered many unattended pockets of people with high needs in terms of health care and access to safe water,” says Monica Falk, MSF’s medical focal point for Jamshoro. “Our DTC can accommodate 20 patients at the moment but we are ready to increase capacity to 100 beds if there is an outbreak.”

In addition to providing at least 300,000 liters of safe water per day to displaced populations in and around Jamshoro, MSF teams go around the camps to raise awareness about proper hygiene measures and what to do if one is suffering from diarrhea. “It does not help patients to take diarrhea medication when they take it with contaminated water, or when they do not know enough about hygiene,” says Dr. Adeela Khan.

Two months after the floods hit Pakistan, the needs remain immense and much more remains to be done. Walking back to her tent clutching medication she’d been given at an MSF mobile clinic, Aamila Bodani says she and her family just want to go back to their village and restart their lives. But that is the long-term plan. “For now,” she says, “I just want my children to be healthy, for them to have enough food and water.”

There are 135 international staff working alongside 1,198 Pakistani staff in MSF’s existing and flood response programs in Pakistan.

* All names have been changed to protect anonymity of patients