“Treating malnutrition in children under the age of five is essential. This improves their chance at survival while their immune system is still developing." 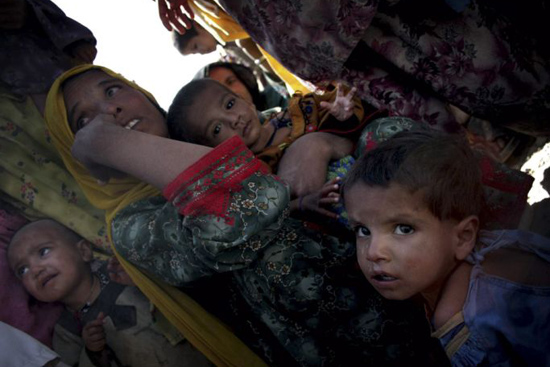 Hamdullah has been working as a nurse with Doctors Without Borders/Médecins Sans Frontières (MSF) in Pakistan?s Balochistan province for the past decade. The monsoon floods this summer forced about 600,000 people to flee into Balochistan from neighboring Sindh province. Among them, Hamdullah saw people who had lost their homes and people who lost family members. He saw tenant farmers, often considered the poorest of Pakistan?s poor, who arrived with nothing. Additionally, Hamdullah says, ?In Dera Murad Jamali and the surrounding areas, I saw many malnourished children in the camps. I admitted 15 to 20 patients to our feeding program every day.?

MSF operates nine outpatient therapeutic feeding programs across Pakistan; outreach teams move around and provide systematic medical check-ups and a week?s supply of ready-to-use therapeutic food (RUTF) for those who need it. This paste, made from peanuts and milk, is enriched with vitamins and micronutrients that children need to recover quickly.

Food aid often focuses on fighting hunger and not on the equally, if not more important task of treating malnutrition, which is crucial for children most at risk. ?Treating malnutrition in children under the age of five is essential,? explained Dr. Ahmed Mukhtar, an MSF medical coordinator. ?This improves their chance at survival while their immune system is still developing. When children are severely malnourished, they cannot resist the infections and diseases most likely to claim their lives. If not treated in time, the damage malnutrition leaves on their physical and mental state is irreversible.?

At present, MSF is treating approximately 1,750 children for severe and acute malnutrition in Sindh and Balochistan. To ensure that children get the treatment they need, Hamdullah works with three other staffers?Ali Sher, Noor Mohammed, and Muhammed Iqbal?to form one of the outreach teams. Their work begins in the morning at MSF?s office in Quetta, Balochistan?s largest town, where they fill a four-wheel-drive pickup truck with seven boxes of RUTF sachets, a scale, a medicine chest full of antibiotics, a tent, a table, chairs, and clean drinking water. They also pack a register that lists the names of young patients and has a record of their weights over a three-to-six week period, based on past visits.

After heading out on the Sariab Road to the outskirts of Quetta, the team nears the Quetta eastern bypass camp. About 40 tents dot the yard at the Muslim Health Clinic compound. Hamdullah is surprised. There were many more tents here not long ago. ?Some families have started returning home sooner than we thought,? he says. ?They are anxious to get to their land before winter sets in.?

The team sets up their post. Within minutes, about 20 young Sindhi girls carrying younger siblings crowd around Hamdullah?s table and scale. They clutch the small pieces of paper they were given during the team?s visit the previous week?notes bearing a child?s name, weight, and the date they were last seen by MSF staff.

Ali Sher calls out a name. Hamdullah confirms the child?s identity and their village of origin, then weighs and measures the infant. He checks the figures against the earlier numbers to determine whether or not progress has been made, and then Noor Mohammed and Muhammed Iqbal hand out a prescribed number of RUTF sachets.

An hour later, Gulbano Nazir pushes into the throng of women and children, tightly holding her two sons, 18-month-old Khalid and 3-year-old Hussain. The floodwaters washed away their mud-walled home near Jacobabad a month ago. She and her husband, Mohammed Rafiq, along with seven other desperate families, sold much of what they owned and borrowed from acquaintances to scrape together the 60,000 rupees (about $750) they needed to pay for a ride to Quetta.

Khalid was diagnosed with severe and acute malnutrition, but is recovering and has gained some weight rapidly thanks to the nutrient-rich RUTF. He digs into it as soon as Gulbano opens the sachet for him.

Despite uncertainty about conditions back in Jacobabad, the family is planning to return home to their devastated village?even though this could jeopardize Khalid?s recovery. ?I just want to go home,? says Gulbano. ?Camp life is tough and winter is coming.? The team gives her 14 sachets of RUTF to take back to her tent. This supply should see her son through until the family reaches a transit camp near Dera Murad Jamali?where MSF also provides outreach feeding care?on their route back home.

Early in the afternoon, the team moves on to another camp, this one near Quetta's railway line, where 300 tents house displaced families. As the sun beats down, the team sets up again. Before they can finish, desperate mothers approach, jostling to get their babies on Hamdullah?s scale while shading their crying children from the heat.

When Hakim Zadi and her son, Akhsa Banu, reach the table, Hamdullah looks at the child and reaches into a box for a color-coded Mid- and Upper-Arm Circumference (MUAC) bracelet. He slips it around Akhsa?s tiny left arm and measures it. The circumference is less than 110 milimeters. ?This child is severely malnourished,? Hamdullah says, handing the boy?s mother a supply of RUTF sachets.

Hours later, after the team has weighed a total of almost 200 patients and handed out more than 50 kilograms (110 pounds) of RUTF at their various stops, they head back to the office. ?It makes me feel good when the child?s condition improves with every visit,? Hamdullah says, heartened by what he?s been able to do on this day. ?People might be moving back home now but there is more to be done because the effects of the floods aren?t over yet.?

Since 1988 Doctors Without Borders/Médecins Sans Frontières (MSF) has been working in Pakistan assisting people suffering from the effects of armed conflicts, poor access to health, care and natural disasters.

Today 1,198 Pakistani and 135 international MSF staff are providing medical care to flood-affected populations and continuing to work in pre-existing programs in more than 15 locations in Khyber Pakhtunkhwa, Punjab, Balochistan, and Sindh provinces, along with the Federally Administered Tribal Areas (FATA).

To ensure the independence of our medical work, MSF relies solely on private financial donations to fund its activities in Pakistan and refuses funding from any government, donor agency, or from any military or politically affiliated group.