MSF, already working in Lae, was able to mobilize quickly and assist the ministry of health in responding to the outbreak. Initially, an isolation ward was set up in the Angau Hospital, but when cases increased, a treatment center was constructed in the front of the hospital. 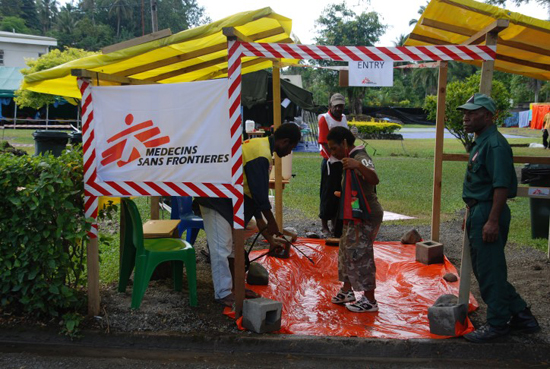 At MSF's Cholera Treatment Center in Lae, a man is given a foot bath to reduce the spread of disease.

For the first time in 50 years, a cholera outbreak has hit Papua New Guinea. Mainly concentrated in the eastern Morobe province, the disease has so far infected 283 people according to official figures.

Doctors Without Borders/Médecins Sans Frontières (MSF), already working in Lae, was able to mobilize quickly and assist the ministry of health in responding to the outbreak. Initially, an isolation ward was set up in the Angau Hospital, but when cases increased, a treatment center was constructed in the front of the hospital. The MSF cholera treatment center has a capacity of 84 beds, and so far, 90 patients have been treated by MSF teams.

“At the moment, we are not seeing a rapid increase in cases in Lae,” said Steven Cooper, MSF’s emergency coordinator. “However, as cholera is a highly contagious disease, we must remain vigilant. We are continuing to monitor the situation and assess more remote areas. We are hearing reports that cholera is affecting smaller villages, so we are sending teams to examine the situation, and we will be ready to respond if necessary.”

As cholera has not been present in the country for 50 years, it has been challenging to raise awareness about treatment and prevention and in reducing the stigma surrounding the disease. For example, some public transport providers are refusing to carry patients, making it difficult for those in need to access treatment. Over the last few weeks, MSF has therefore focused energy on raising awareness about the disease by organizing workshops on hygiene and the use of chlorine, and briefing key members of the community including schools, pharmacies, and local NGOs.

Symptoms of cholera include profuse vomiting and diarrhea resulting in severe dehydration. Although it is a highly contagious disease, cholera can be prevented by following strict hygiene practices and using and drinking safe, clean water. Treatment is simple: most patients are treated using oral rehydration solution (ORS), which provides electrolytes to rehydrate the patient. More severe cases are treated using intravenous drips.

MSF will continue to provide treatment for cholera patients until the epidemic is contained. In addition to cholera, outbreaks of shigella and influenza A (H1N1) have been confirmed in Menyama district. MSF is planning to send a medical assessment team to investigate.