Each month, between 200 and 300 new patients come to the MSF clinic in Lae. They have all been raped, beaten or attacked with knives. 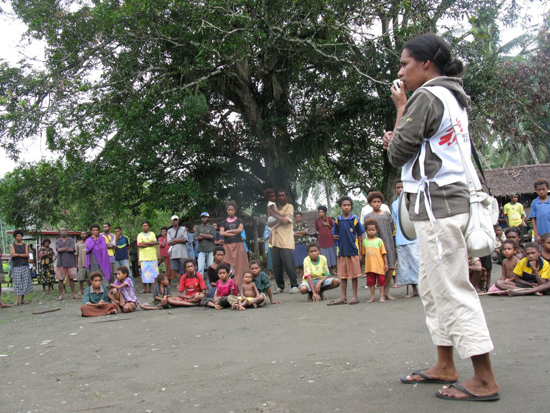 An MSF outreach worker in Lae talks to a crowd about the effects of violence on individuals and societies.

The people of Papua New Guinea (PNG) are caught in a self-perpetuating cycle of violence. The rapid development the country has experienced over the past year has had the unintended consequence of aggravating existing tensions. For the most part, it is women and children who bear the brunt of this, suffering rape and other terrible forms of violence—some of it carried out by family members—that create an urgent need for both medical care and psychosocial support.

“I often felt overwhelmed during the work, overwhelmed by the violence my patients told me about and by the depth of their wounds,” says Nathalie Muffler, a 39-year-old gynecologist who spent nine months working for MSF at a clinic in Lae, the second-largest city in PNG. “What they have endured is unimaginable to me,” she adds. She treated victims of domestic and sexual violence, the vast majority of them women and children. “I saw a nine-year-old girl who was brutally raped near our clinic. She was out on an errand for her sick mother when the attack took place. And there was a woman—a new mother—with an untreated fracture on her arm,” she remembers. “The husband had raped her shortly after she gave birth. She only told us later that he had also broken her arm when she was still pregnant.”

Each month, between 200 and 300 new patients who have been raped, beaten or attacked with knives come to the MSF clinic in Lae. The clinic is the only place where they can find help in a safe environment. “I worked together with seven local colleagues,” says Muffler. “We stopped bleeding, dressed wounds, tended to blood effusions and eye injuries. And we accompanied those patients who needed surgery or intensive care to the public hospital.”

That accompaniment was necessary because the hospital, one of only a handful in the country, is always busy and offers neither confidentiality nor a safe room for victims of violence. Many patients, therefore, are too afraid to go to the hospital on their own. Also, the waiting periods in the public hospital are long, and victims of sexual violence need help quickly. Protection against HIV/AIDS with antiretroviral medicine, for instance, is only possible in the first days after a rape. Protection against an unwanted pregnancy is also still possible then. Patients also need antibiotics to avoid the spread of sexually transmitted diseases that are common in PNG and immunizations for Hepatitis B.

Breaking the Cycle of Violence

Medical help is important, but it is not enough. “Many women and children are caught in a downward spiral of violence,” Muffler notes. “They have nowhere to go but home when we discharge them from the clinic. Then everything starts again for them.” To break the cycle, people need knowledge and support. MSF outreach workers distribute flyers with information about its clinic and visit schools, marketplaces, and even road crossings in and around Lae to talk to people about the effects of violence. In addition, the team has developed contacts with a network of local groups to ensure that MSF’s services are widely known.

In its programs, seven psychosocial counselors and a social worker offer therapeutic help to victims, talking to them about their fears and about ways to resolve conflicts without violence. Sometimes family members attend these sessions. In such cases, the counselors can specifically address violence in the family. But they also support the women and children who want to take legal action against their attackers or are seeking protection from them. For instance, MSF cooperates with local safe houses and organizes temporary shelter for patients who have nowhere to go.

To date, MSF has been the only organization in PNG offering victims of violence both immediate medical care and psychosocial counseling. At present, however, the Ministry of Health is looking at the clinic in Lae as a model, and with the support of MSF, similar support services are currently being set up in other locations. But it’s a slow process; the country is poor and beset by pressing issues. (One was a cholera outbreak last September, the first in the country in 50 years. MSF responded by sending 27 additional staff to three provinces and treating hundred of patients.)

MSF’s care for victims of violence carries on uninterrupted. In fact, MSF recently opened a second project for victims of violence in the rural city of Tari. MSF had already been working in Tari, focusing on maternity, inpatient care, and water and sanitation. Now, the hospital also offers complex surgical services to victims of violence and runs a Family Support Centre similar to the one in Lae, offering medical and psychosocial care for victims of rape and domestic violence. “Very often, coming to our services is the first opportunity our patients have to talk about their terrible experiences,” says Muffler. “With us, they experience that there can be help for them. And for this, they are very grateful.”