Two patients being treated by MSF for tuberculosis in Tajikistan tell their stories. 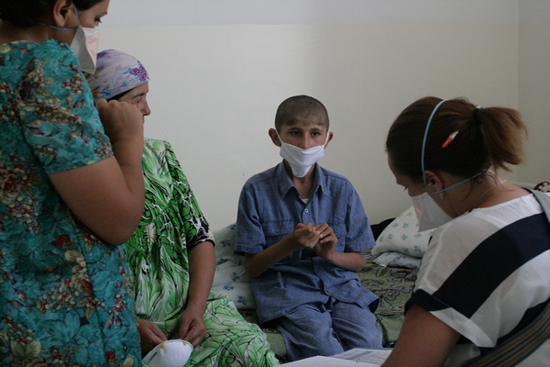 A young patient suffering from MDRTB discusses his drug regimen with MSF nurse Cindy Gibb at a hospital in Dushanbe, Tajikistan.

Zafar, a thin 12-year-old boy with curious eyes, greets us in his room in Machiton hospital’s drug-resistant tuberculosis department and reaches hastily for a surgical mask. In some of Tajikistan’s TB facilities, infection control measures, such as wearing masks, are not yet implemented – even by health care staff – but such behaviour is not tolerated in the MSF-run ward.

Zafar’s brother died of TB, and in January his mother died of MDR-TB. Zafar has been treated for TB before, but the treatment was unsuccessful and three months ago he was re-admitted to hospital with a fever and dry cough, having lost a lot of weight. Many children have difficulty coughing up sputum for analysis, but Zafar was able to produce enough and was diagnosed with MDR-TB.

Zafar’s treatment is progressing well. He is putting on weight and tolerating the drugs, although he has experienced some side effects including joint pain and diarrhea. While one of his lungs has extensive damage, he is no longer short of breath, and he dreams of playing sports again.

When asked about his treatment, Zafar becomes animated, counting the pills in his daily dose on his fingers: “Three white pills, two yellow pills, one red pill, two brown capsules, one sachet with granules, and an injection.”

Tomorrow the hospital’s medical staff will decide whether Zafar is well enough to return home and receive the rest of his treatment as an outpatient. His grandmother and father are anxious for him to come back with them. If Zafar does go home, MSF will provide all the necessary drugs, while a community nurse, trained by MSF, will visit him daily to administer the pills and injections and monitor his progress.

Zafar’s grandmother believes that supervision by a nurse is a good idea. “Oh yes, he needs to be followed up all the time,” she says. “He even needs to be reminded to eat – he is fully absorbed by his computer or mobile phone.”

“That’s normal,” replies MSF nurse Cindy Gibb. “He is 12 years old, after all.” On cue, Zafar charges across the room to fetch his mobile phone to show us pictures of his little sister. “I hope soon we’ll be playing football together,” he says.

Nadira and her two sons, aged three and four, live in a mountain village 40 kilometers [about 25 miles] from Dushanbe. All three are being treated for tuberculosis, two of them for drug-resistant forms of the disease. After five months in a TB hospital in the capital, under the care of MSF doctors, nurses, and counselors, the family has recently returned home to continue their treatment as outpatients. Nadira’s sister, Gulnara, lives nearby, and she and her two children are suffering from MDR-TB. Gulnara’s seven-year-old daughter died the previous year from a deadly combination of TB and meningitis.

TB has devastated Nadira’s extended family. It's common for large multigenerational families to live together under one roof in Tajikistan. When a child is admitted to the TB hospital near Dushanbe, the counselor’s first task is to construct a family tree. This helps them work out where the child contracted the disease and who else could be in danger.

For Nadira, it all began when her sister Muhabbat took in an orphan from her husband’s family. The girl had recently returned with her mother from Dushanbe, where they eked out a living working in the city’s market. Soon after they returned, the girl’s mother died of TB and the child herself fell ill. Over the next few years, four of Nadira’s five siblings contracted TB, two of whom—Muhabbat and Shoira—have since died. Her brother had TB but recovered, while two teenage nieces are sick. Altogether 11 family members caught the disease.

There are countless families like Nadira’s in Tajikistan struggling with TB. There is a deep-rooted stigma around the disease in Tajikistan, and many people believe it to be inherited and incurable. MSF’s approach to handling the problem is to meticulously trace the social contacts of children who have been diagnosed with TB. Children often serve as the entry points to extended families like Nadira's, providing a way to untangle the web of kinship ties and reach out to neglected TB sufferers whose illness may have gone unacknowledged and untreated.

Patients' names have been changed.