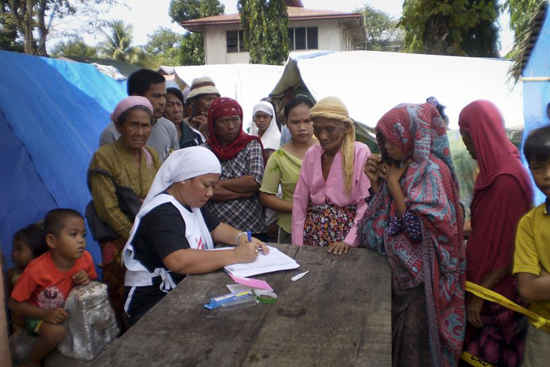 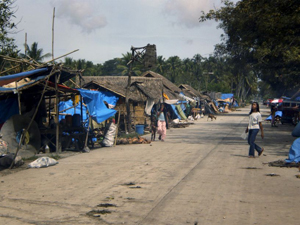 Displaced people live in tents along the road in Mamasapano, Maguindanao province.

Since November, Doctors Without Borders/Médecins Sans Frontières (MSF) teams have brought mobile medical clinics to these internally displaced persons (IDPs) and provided much-needed water in Mindanao. By the end of December, MSF had conducted over 3,000 medical consultations in more than 10 locations, notably in the areas of Datu Piang, Pikit, and Mamasapano.

More than 26 percent of patients are suffering from respiratory diseases, usually due to sleeping outside. Others are diagnosed with body pain, headaches, fever, or stomach problems. Some of the children seen by MSF’s medical teams show signs of acute malnutrition. Early this year, MSF teams and the Philippines Department of Health will undertake a mass nutritional screening for children under five years old. Those diagnosed with severe and moderate acute malnutrition will be treated.

Some cases of tuberculosis and measles have also been reported. Severe cases are referred by MSF to the main regional hospital in Cotabato.

MSF support has also been given to local health centers, thanks to good collaboration with the Department of Health. “Due to the massive influx of displaced people, health structures are overloaded and can’t face the situation in terms of human resources and drug procurement. For instance, Datu Piang town has seen its population grow from 42,000 to 82,000 in just a few months,” says Helmi Mekaoui, MSF deputy program manager for the Philippines. “That’s why we help the local clinics with human resources and give them some drugs, in order to maintain a necessary level of medical assistance.”

To improve sanitary conditions, MSF logisticians have worked on draining water sewage systems in some IDP camps. In January, they also provided drinking water to over 5,000 displaced people in Mamapasano.

Last August, the suspension of peace talks led to the intensification of hostilities between the Philippine army and autonomous elements. In five months, an estimated 300,000 to 500,000 people have been forced to leave their villages to escape violent clashes and bombings. Some have no place to go back to, because their villages were burnt down.

As the current crisis on Mindanao island forces more and more people to flee their homes, MSF teams are getting ready to increase their activities in the coming months, to respond to the most urgent needs.

Sapita is a 50 year old mother of three from a village near Datu Saudi, a town in the province of Maguindanao heavily affected by the ongoing hostilities between government and rebel forces. She is among the tens of thousands who have crowded themselves in the town center to seek refuge from the fighting in nearby surrounding villages. She and her children have been in the camp at Datu Piang since August.

When we met Sapita, she was mixing a bubbling pink concoction in a metal bowl over a smoking fire in the middle of the blazing heat—shrimp paste she’s hoping to sell locally to support her family and to compliment the relief items they have been receiving from aid agencies.

Sapita and her neighbors received no warning when clashes erupted suddenly in their area. Around 9 a.m., as shells were falling on their village, Sapita and her neighbors hurried to find safety. They had just enough time to collect their children and left behind all their belongings, clothes, appliances, crops, and farm animals. “We ran like hell,” she says.

Stirring her shrimp paste, Sapita and fellow IDPs have gathered to discuss their experience. They no longer know how many times they’ve evacuated, but this time is different. Previous evacuations were usually only for a week or a couple of days in the past. Displaced since August, they don’t know when they can go home.

Until then, Sapita, her neighbors, and thousands of others will live here in Datu Piang with their children. Sapita’s oldest daughter Asama, 13, and Sema, 9, were in elementary school before they evacuated. Her youngest, Farneda, 6, had tried to start school, but was told she was too young.

For now, all the displaced children have had to stop going to school. Some have become sick. And some who became sick have died.