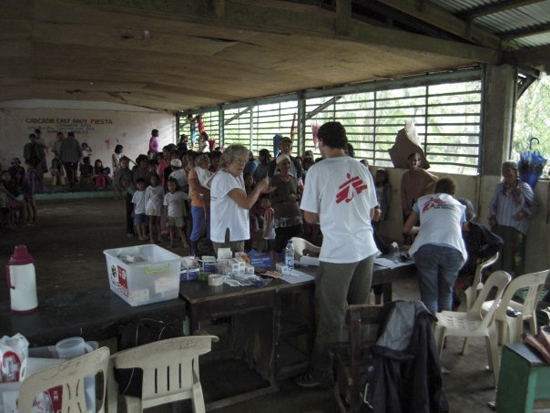 Torrential and prolonged rains continue to flood new areas of the main Philippine island, Luzon. Mobile teams from Doctors Without Borders/Médecins Sans Frontières (MSF) are providing medical care and relief items to the most vulnerable people in the remote and inaccessible areas where many have yet to receive any help.

On October 8, landslides in the northern province of Benguet caused about 180 deaths. The same day, in neighboring Pangasinan province, a dam overflowed and released huge amounts of water that flooded between 60 and 80 percent of the houses in the nearby area. According to local authorities, a total of 30 towns were flooded and 50,000 people had to flee their homes.

In addition to the two mobile MSF teams currently providing assistance in the far northern part of Luzon Island, another team has been dispatched to Rosales in Pangasigan province, a low-lying area in a valley which was severely hit by flooding from the dam.

"When our team got to Rosales on Friday, there was literally a river running through town, which at some points was between eight and 10 feet deep."

”When our team got to Rosales on Friday, there was literally a river running through town, which at some points was between eight and 10 feet deep. The houses are built of light materials—bamboo and thatched roofs—and were swept away completely,” says Voitek Asztabski, MSF’s emergency coordinator. “The devastation is tremendous and nearly 100 percent of the households have been affected. In the evacuation centers there is scarce food and no distribution of relief items or hygiene kits. This is why we are trying to support and assist as much as we can.”

In metropolitan Manila and its surrounding areas, additional MSF teams are still working to provide medical care to the most vulnerable people affected by Tropical Storm Ketsana, which struck the Philippines on October 26, affecting 3.9 million people and displacing 500,000 from their homes.

The priority of MSF teams is to provide medical care to people living in flooded areas of metro Manila, Laguna, Rizal, and Pagasinan, where the healthcare system is currently disrupted.

“Normally we have criteria for the assessments, but this is basically a total destruction and the houses are completely swept away. So the criteria are just very clear for us. The needs are huge and identifying the most affected places and distributing items will be our main activity,” says Asztabski.

MSF teams are also regularly assessing hygiene conditions in the overcrowded evacuation centers to detect and respond to potential outbreaks of disease.

More than two weeks after Ketsana hit the central region of Luzon Island—only to be followed by Typhoon Parma a week later—there are still pockets of people living in poor and flooded areas, in particular along the river banks in Manila, who have not been reached by the relief effort.