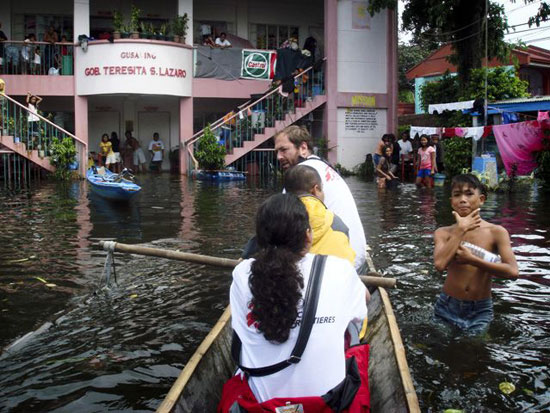 Over the last 40 days, the Philippines has been hit by two violent typhoons and a tropical storm, which have all caused severe flooding and prompted people to assemble in evacuation centers like this one in Santa Cruz.

Typhoon Mirinae hit the east coast of Quezon province in the Philippines on October 30, packing winds of 93 mph with gusts of up to 115 mph. Mirinae, also called Santi, brought heavy rain and floods to the area before weakening into a tropical storm and veering towards Vietnam. The Philippines has been hit hard this season, with Tropical Storm Ketsana and Typhoon Parma first causing havoc about a month ago.

"This new ordeal will no doubt make [people] more vulnerable to waterborne diseases."

"In some areas, the water has come up to waist height. People were still trying to cope with the aftermath of Ketsana and have already spent weeks in stagnant water,"says MSF emergency coordinator Pierre Luigi Testa. "This new ordeal will no doubt make them more vulnerable to waterborne diseases."

MSF, which has been providing assistance to victims in all affected areas of Laguna Bay and in the east of Manila since last month, has been assessing the newly flooded areas, especially in the coastal and southern areas of Laguna and in Santa Cruz, where 80 percent of the town has been submerged.

In the province of Tarlac and the urban municipalities of Los Baños, Cabuyao, Santa Cruz, and Calamba, MSF has identified the need for additional distributions of hygiene kits and plastic sheeting and further water and sanitation activities. New latrines need to be built and clean water needs to be provided. Five primary health posts have been flooded after the typhoon and MSF will launch new mobile clinics in the area.

MSF runs regular mobile clinics in the Laguna province, southeast of Manila, both in the evacuation centers and in the flooded communities, and continues to monitor the health situation. More than 1,500 consultations have been conducted since the beginning of the intervention a month ago.

In collaboration with the Philippine ministry of health, MSF also works on the control and surveillance of cases of diarrhea and leptospirosis—a bacterial infection caused by exposure to water contaminated by animal waste.

MSF has been distributing relief kits with jerry cans, cooking utensils, blankets, soap, and materials for building shelters for an estimated 18,000 families in the affected areas. Water and sanitation activities are also underway with the construction of latrines and distribution of sanitation kits with chlorine and brushes in several evacuation centers.

After an initial intervention in the northern island of Luzon, in Cagayan and Illocos Norte provinces, which were severely hit last month, MSF has been providing assistance to flood victims in Pangasinan, Tarlac, and Benguet where 12,000 hygiene and constructions kits have been distributed. In these areas, MSF has conducted over 2,500 consultations and continues to monitor the health situation in order to control and prevent possible disease outbreaks. MSF has also built temporary latrines in Rosales, Pangasinan and has distributed water purification tablets to over 9,000 households.