Despite some progress in the fight against malaria, rising rates in some countries and reports of drug-resistant strains from others continue to cause great concern. 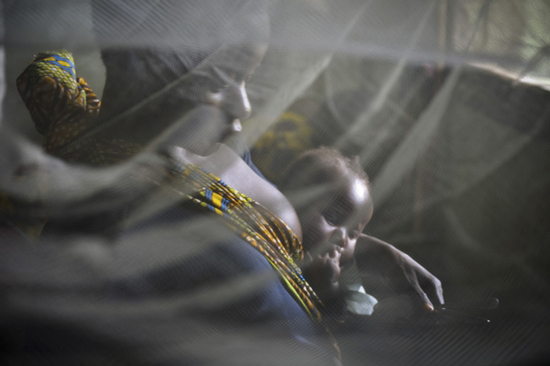 A mother and child in the pediatric ward of Niangara hospital.

On April 25, the annual World Malaria Day, many health organizations will highlight important gains in fighting this deadly disease that claims more than one million lives every year. But despite notable progress in innovation and investment, Doctors Without Borders/Médecins Sans Frontières (MSF) continues to see continuously high rates of malaria in several African countries. In the Democratic Republic of Congo (DRC), MSF has observed infection rates above emergency thresholds in several zones over the last six months, which can be largely attributed to a dysfunctional surveillance system, the failure of the health system to respond to elevated levels of malaria, poor organization, and lack of diagnostic testing and drugs.

Equally worrying are the continuing reports of emerging cases of drug-resistant malaria in Thailand, Myanmar, and Cambodia. Artemisinin combination therapy (ACT) is currently the only effective drug to treat malaria. MSF administered ACT to nearly one million patients in more than 30 countries in 2010. In Africa, the emergence of malaria resistant to ACT would aggravate an already disastrous public health problem, as there are simply no effective alternative drugs available to treat this deadly disease.

The risk factors that could lead to the rise of drug resistance are all present in Africa and need to be eliminated. Access to high quality care and treatment is still far too limited, which leaves the door open to the use of substandard and fake drugs. What's more, even proper drugs are often taken in too-small quantities or treatment is interrupted because of high cost or lack of awareness about the importance of completing the full course. Despite the existence of cheap rapid diagnostic tests that can confirm if the patient has malaria in just 15 minutes, antimalarial drugs are often given and taken without proper diagnoses, which leads to overuse of drugs when they are not needed.

Several measures are urgently needed: more stringent malaria prevention and treatment initiatives; investment in health promotion; efforts to improve adherence to treatment; and further reduction of transmission. National malaria programs need to monitor drug efficacy and be prepared to take action if reduced efficacy is detected. And in places where there is already resistance or reduced efficacy of drugs, concentrated efforts are needed to contain the spread of drug-resistant strains of malaria.

A comprehensive package to detect, treat, monitor, and prevent malaria will save more lives today, and gives the highest likelihood to avert—or at least delay as long as possible—any further emergence of resistance to the only lifesaving antimalarial drugs that exist in the world today.