In Kunduz, MSF is running the only specialized surgical center in Northern Afghanistan. 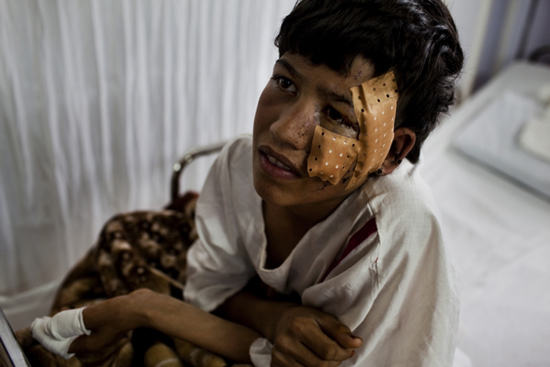 Ali [patient name changed] was injured when a discarded detonator he found exploded in his face. He was treated at MSF's Kunduz hospital.

Ali [patient name changed], 14 years old, was playing in the fields with his friends outside Kunduz city in the northern Afghan province of Kunduz.

“We found something that looked like a battery. We picked it up and connected two wires sticking out, and it exploded in our faces.”

Ali’s family drove him to Doctors Without Borders/Médecins Sans Frontières (MSF)’s newly opened surgical hospital in Kunduz city. He had shrapnel in his face and injuries to his hands and arms.

“It was probably a detonator that someone had left behind” said Dr. Martin John Jarmin, an MSF surgeon. “His brother ended up totally blind, but Ali was lucky and will recover.”

The MSF surgical hospital where Ali and his brother were treated was opened in August 2011. The only specialized surgical center in northern Afghanistan, it is equipped with an emergency room, two operating theaters and an intensive care unit, and 70 beds across 4 wards.

Before the trauma center opened, people in the region suffering from severe injuries were forced to make the long and dangerous journey to Kabul or Pakistan—or visit expensive private clinics—in order to receive care. Because of this, few patients received the trauma care they required.

“The hospital is responding to a real need that wasn’t met before,” said Silvia Dallatomasina, MSF’s medical coordinator in Kunduz. “Most of our patients come from Kunduz, but a significant number also come from neighboring provinces, or even as far away as Herat along the Iranian border.”

Less than a year after the hospital opened, the MSF team has treated more than 3,700 people.

Although violence continues across northern Afghanistan, there has been a relative lull—more of a slow burn than an all-out conflagration. Since the MSF hospital opened, the majority of patients have been victims of “general trauma”—road traffic accidents, domestic violence, or civilian gunshot wounds.

But the conflict rears its head occasionally, resulting in inevitable casualties. Several bombings in Kunduz in recent months have brought multiple wounded to the hospital. On February 25, more than 50 severely injured people arrived at the hospital gates in the space of a few hours, following demonstrations outside the local United Nations compound that had turned violent.

Some 20 international and 300 national MSF staff members work at the hospital. Since its opening, the hospital has performed more than 1,500 surgeries.

A big part of trauma care is follow-up after surgery with physical rehabilitation. In the rehab room, physiotherapist Berangere Ghoy, a Handicap International worker who collaborates with MSF in Kunduz, is helping a patient through his daily exercises.

“[The patient] broke his leg in a traffic accident in Badakshan, it’s a province in eastern Afghanistan,” said Berangere. “He was lucky that we didn’t have to amputate his leg. This boy is really brave—he has been in pain for more than a month, but never says anything.”

MSF teams also work in Ahmad Shah Baba Hospital in eastern Kabul and Boost Hospital in Lashkargah, Helmand province. MSF recently opened a maternity hospital in Khost in eastern Afghanistan. In all locations, MSF provides medical care free of charge and works in all wards of the hospital.

MSF relies solely on private donations for its work in Afghanistan and does not accept any government funding.