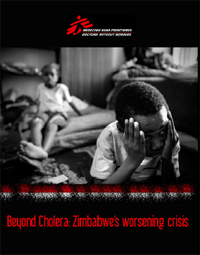 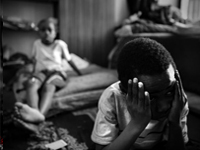 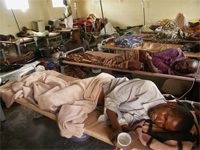 The severity of the cholera outbreak is just one manifestation of the disastrous state of Zimbabwe’s health system and its collapsed infrastructure, as described by MSF in a new briefing paper, "Beyond Cholera: Zimbabwe's Worsening Crisis," released today. Many health facilities in Zimbabwe have now closed or are not functioning. Others demand exorbitant fees in foreign currencies. This makes it effectively impossible for most Zimbabweans to access medical care.

MSF is appealing to the government of Zimbabwe to immediately remove existing barriers and facilitate independent assessments of needs in order to be able to provide timely, essential humanitarian and medical aid. The organization also calls on the international community to respect the distinction between political goals and the urgent humanitarian imperative to ensure that Zimbabweans receive the assistance they need today.

MSF has had to respond on such a massive scale to the cholera outbreak as local health structures simply could not cope.

"There has been a devastating implosion of Zimbabwe's once-lauded health system, which doesn't just affect cholera patients,” said Manuel Lopez, MSF head of mission in Zimbabwe. "We know that public hospitals are turning people away, health centers are running out of supplies and equipment, there is an acute lack of medical staff, patients can't afford to travel to pick up their HIV medication or to receive treatment, and many of our own clinics are overflowing," he said. "From what we see each day it couldn't be clearer – this is a massive medical emergency spiralling out of control."

Zimbabwe's political crisis and resulting economic breakdown have led to abysmal access to public healthcare, a collapsed infrastructure, a crushing HIV epidemic, political violence, food shortages and malnutrition, internal displacement, and displacement to neighbouring countries. An estimated three million Zimbabweans have sought refuge in South Africa, the most extraordinary exodus from a country not in open conflict.

In Zimbabwe, despite the glaring humanitarian crisis, MSF often experiences restrictions and enforced delays when carrying out its work. To make matters worse, there is a clear lack of a strong, coordinated, international response to the unfolding humanitarian emergency.

"The situation in Zimbabwe is causing inexcusable suffering," said Dr. Christophe Fournier, MSF’s international president. "Urgent measures must be taken to ensure Zimbabweans have unimpeded access to the humanitarian assistance they so desperately need. The Zimbabwean government must guarantee that aid agencies can work wherever needs are identified and ease bureaucratic restrictions so projects can be properly staffed and drugs quickly procured," he said.

"Governments and international agencies must recognise the severity of this crisis and ensure that the provision of humanitarian aid remains distinct from political processes," he continued. "Their policies towards Zimbabwe must not come at the expense of the humanitarian imperative to ensure that malnourished children, victims of violence, and people living with HIV/AIDS or other illnesses have unhindered access to the assistance they need to survive."

Doctors Without Borders/Médecins Sans Frontières (MSF) has been working in Zimbabwe since 2000 and providing medical assistance to Zimbabweans fleeing to South Africa since 2007. Since the beginning of the cholera outbreak in August 2008, MSF has treated 45,000 patients. MSF also provides care for more than 40,000 people living with HIV/AIDS, including 26,000 who are receiving antiretroviral therapy (ART), and provides nutritional support to severely malnourished children.