Refugees who fled violence in Ituri, DRC, face disease and privation in Uganda

The attackers wore masks and used axes, machetes, and guns to slaughter civilians in the strife-torn Ituri province of Democratic Republic of Congo (DRC), says Areiti, a mother of seven children.

The morning the violence came to her village of Joo, she had no time to prepare her family’s escape. “I saw how they were killing people,” the 37-year-old says. “They cut people with axes and they slaughter with machetes. You cannot see them clearly because they are running after you. They attacked our village before Christmas, and we spent Christmas in the bush.”

After escaping, Areiti and her children braved the journey to the shores of Lake Albert. And like some 57,000 other people who have fled renewed violence in eastern DRC since mid-December, they crossed the lake on a boat to Uganda, in search of safety and another chance at life.

“We left [DRC] at sunset. The lake was difficult to cross. The wind was strong and it was hard to reach the other side. The wind blew hard, but God helped us and we survived,” recalls Areiti as she prepares the little food she has for her children to eat. She had to sell their only goat to pay the fishermen who took them across the lake.

But even in the relative safety of Uganda, Areiti and six of her children have very little to survive on as refugees. They’ve been living in a camp since February 2018. For Areiti, the pain of exile is exacerbated by the fact that the violence separated her from her husband and one of her children. She hopes they’ll be reunited, but, as the killings continue in DRC, it is hard for her loved ones to find an escape route. For now, she and her children live in hope that their family will be whole again, as they try to forget the horrific scenes they survived. 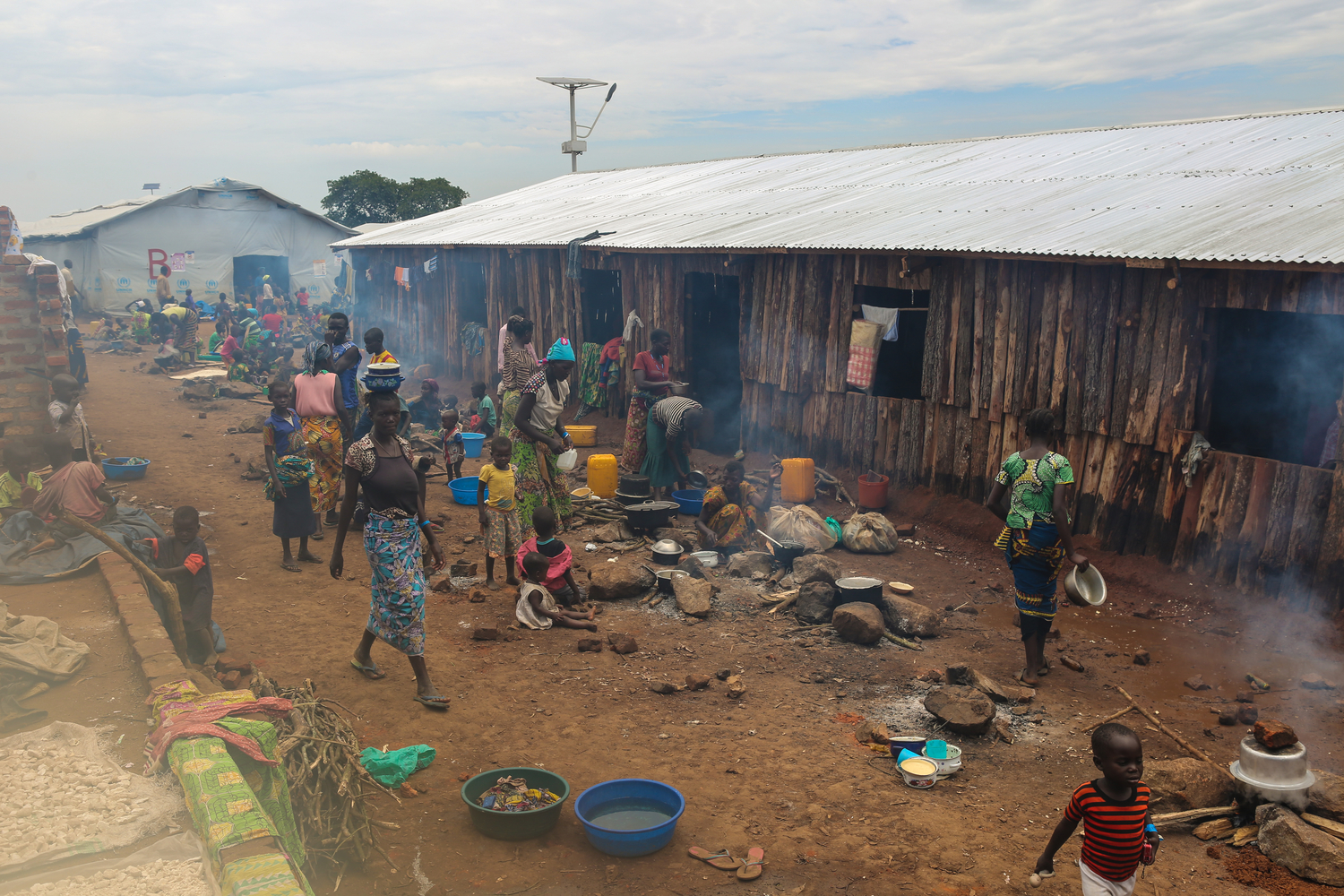 When families like Areiti’s reach the Ugandan shore, they travel by bus to the reception center at Kagoma for registration. This can take several weeks, as the center is overcrowded, hosting 6,000 people in a space built for hundreds. Many of the new arrivals have no choice but to sleep in makeshift structures made from wood and plastic sheeting.

In these shelters men, women, and children of all ages share mattresses and bamboo rugs, sleeping back-to-back to make room for each other. The lucky ones were able to carry plastic chairs, jerry cans, and buckets with them in their flight from DRC. Most came with nothing but the clothes of their backs, and are desperate for help.

Under such precarious conditions, and with limited access to clean water and latrines as the number of new arrivals overwhelmed the reception facilities, the cholera outbreak that started in mid-February has taken a terrible toll among the vulnerable refugee population. As of late March, 1,955 patients have been admitted to dedicated health structures suffering from severe cholera, and at least 39 people have died.

The risk of a measles epidemic is also very real. Doctors Without Borders/Médecins Sans Frontières (MSF) set up an outpatient clinic inside the reception center and is vaccinating all newly arrived children against the disease in an attempt to mitigate its spread.

For Janet, a 30-year-old mother of three young children, arriving in Kagoma on March 9 after fleeing the Congolese village of Tchomia brought little respite. “We have nothing,” she says. “I don’t even have cups to drink water from.” Her husband is also missing as a result of the violence in Ituri province.

“My children and I are suffering here. One of them is sick; we are all in trouble,” she said as she waited for medical advice at an MSF clinic. Though she and her children are now safe from the violence that engulfed Ituri, they must now wait for registration before they can be sent to the camp. 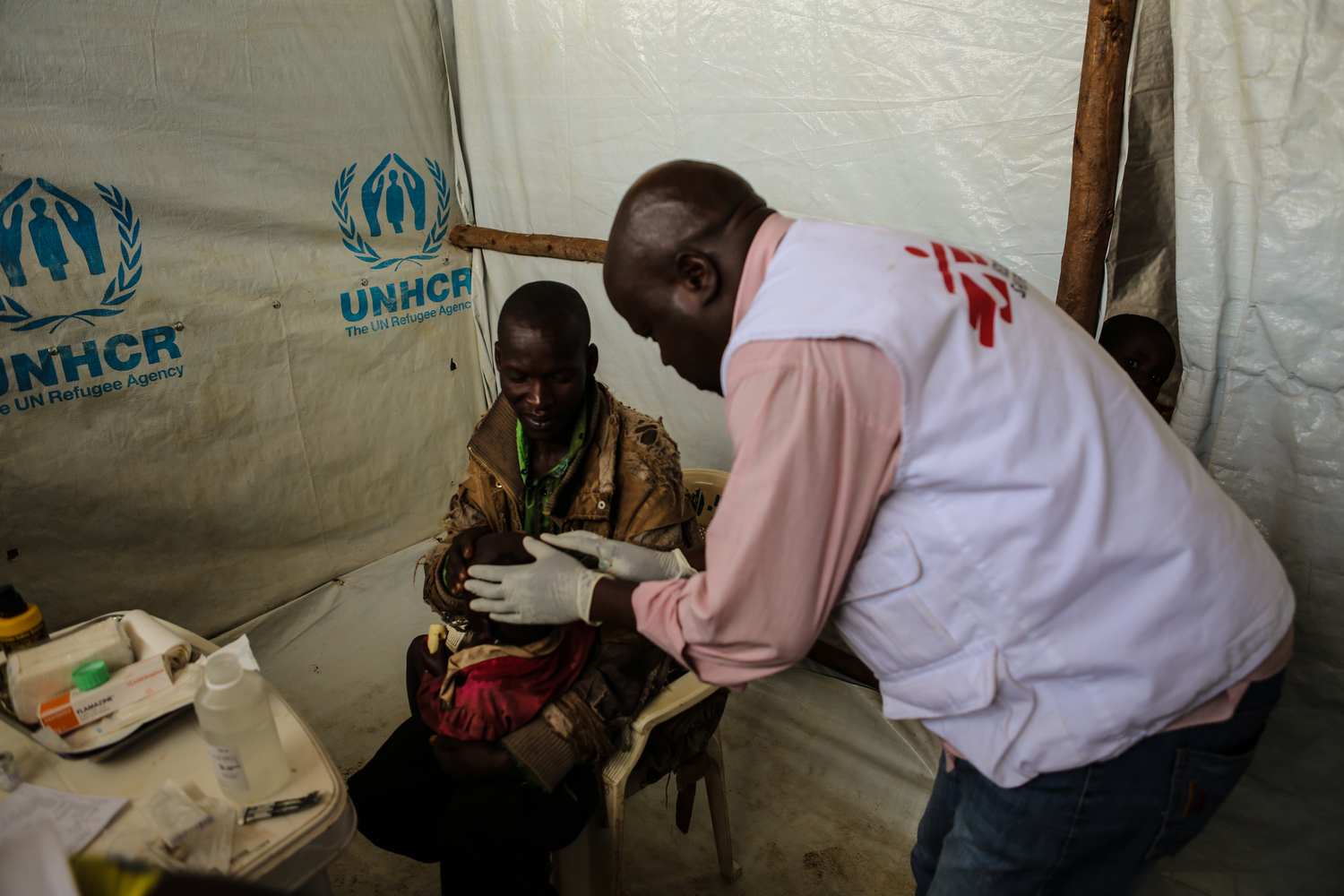 Even refugees who make it out of reception face dire conditions in the nearby refugee camps. Mara Tatu camp, a short drive from the reception center, is located in a fertile area of western Uganda, some 250 kilometers [about 155 miles] from the capital, Kampala. Over 75,000 refugees live in camps in this region, including some 40,000 Congolese people—mostly women and children—newly arrived from Ituri.

Unlike the overcrowded reception center, there is—for now—enough space for everyone in the camp. But even here, the outlook for refugees is bleak. In Mara Tatu, new arrivals are given little more than plastic sheeting to build the makeshift tents that will be their homes for at least the first few weeks. Those who have been there longer gather wood and try to build more permanent structures.

Emmanuella, a 42-year-old woman, fled Ituri with her husband and five children after their home village of Tara was attacked by a militia around Christmas of 2017. “My sister was killed [by] a gunshot to the head, and my brother was murdered with a machete,” she recalled. “They were both running from an armed group, and were killed in the bushes.”

Before fleeing to Uganda, Emmanuella’s family tried to shelter in the Congolese town of Tchomia, but it too was attacked two weeks later. Emmanuella and her family now live in Mara Tatu camp, with no prospect of returning home. The violence across the lake in DRC shows little sign of abating, and refugees like them have no choice but to accept living far from home for the time being.

For now she tries to be the best possible mother for her children, but desperate conditions in the camp make that difficult. “The nongovernmental organizations are giving us food and it is supposed to last us for a month,” she said. “But after two weeks it runs out. Some people are turning to theft, because of this lack of food.”

But Emmanuella hasn’t given up hope: next to the family tent, she is growing red beans to feed her children. “I will be patient until they grow,” she said. “I have no other option.”

Violence has displaced more than 100,000 people from their homes in Ituri province, Democratic Republic of Congo (DRC). The fighting began in December 2017 and intensified in February. Many of those affected have fled to other parts of DRC, north towards Mahagi or south towards Bunia, while tens of thousands of others have crossed Lake Albert seeking safety in Uganda. Doctors Without Borders/Médecins Sans Frontières (MSF) teams are working in both DRC and Uganda to help people displaced by the attacks