Republic of Congo: The Forgotten People of the Ubangi River

Tens of thousands of refugee families who fled fighting in the Democratic Republic of Congo are now living on the banks of the Ubangi River, enduring shortages of food, shelter and healthcare. 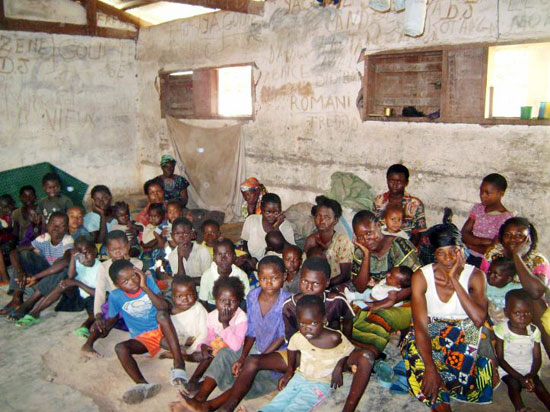 Some of the rising number of refugees who have fled fighting in the DRC to seek sanctuary in the Republic of Congo since late last year.

Tens of thousands of refugee families on the banks of the Ubangi River in the Republic of Congo (Congo-Brazzaville) and Central African Republic (CAR) are facing extreme shortages of food, shelter and healthcare. The refugees fled violence that erupted in Equateur Province in neighbouring Democratic Republic of Congo at the end of 2009. Since then, more than 100,000 refugees have arrived on the banks of the Ubangi, including more than 11,000 in the past several weeks. MSF is providing healthcare assistance at more than 20 locations along the river.

In recent weeks, more than 11,000 refugees have poured into the Republic of Congo fleeing violence in neighbouring DRC. In the four months since fighting erupted in the DRC’s Equateur Province in October 2009, the number of refugees living along the Ubangi River in the vicinity of Liranga, a village south of Impfondo in the Republic of Congo, has grown to more than 100,000. The refugee families are scattered in small groups over an area stretching 300 miles along the riverbank.

Doctors Without Borders/Médecins Sans Frontières (MSF) is providing healthcare in more than 20 permanent and mobile community clinics along a stretch of the Ubangi from Impfondo Mougoumba, south of CAR. MSF medical staff are also working in a local health center and two hospitals in Impfondo and Mongoumba. All patients with serious medical complications are referred to the hospital for treatment. Medical care provided includes prenatal consultations, treatment for malnutrition and vaccinations. More than 10,000 children between the ages of one and five have been vaccinated against measles in the district of Bétou (in the Republic of Congo), and a vaccination campaign for children between 6 months and 15 years of age is underway in the district of Mongoumba (CAR).

Between November 2009 and January 2010, MSF teams provided more than 25,000 medical consultations. Three-quarters of the patients were refugees. The most common illness diagnosed was acute respiratory infection. “Living conditions for the refugees are still very precarious,” says Caroline Rousseau, who is in charge of MSF’s operations in Bétou district. “These respiratory problems are linked to a lack of shelter. We also have many patients suffering from malaria. We have distributed mosquito nets and other essential equipment to 2,500 families, but more needs to be done. On the other hand, since an improvement in the water supply and the distribution of soap, the number of cases of diarrhea has stabilized over the past several weeks.”

Distributions of supplies are being organized, with the United Nations High Commission for Refugees (UNHCR) and the World Food Program (WFP) taking the lead. But the needs of the refugees are only being partially met. The challenges are significant: transporting and distributing aid along approximately 300 miles of river requires considerable resources. Until adequate resources become available, the local population is the only source of aid for many of the refugees’ daily needs. The number of refugees now almost equals the normal population in this already disadvantaged region; the pressure on local resources is extreme.

“Because food distribution is inadequate, refugees are forced to return to the other side of the river to look for food in their fields, in their villages,” said Rousseau. “Insecurity remains a problem outside of the main towns. Refugees, especially women, risk meeting with violence during these brief back-and-forth visits. We have treated women who were victims of sexual violence. In addition, those who cross the border are sometimes forced to pay taxes, both on the DRC side and the Republic of the Congo side.”

Despite the deployment of DRC government armed forces, local residents still consider the situation in Equateur to be dangerous. According to the UN, some of the 60,000 families who fled their villages but stayed within Equateur have now returned home.

MSF has been working in Equateur since December in two health centers in the communities of Bomboma and Makengo. MSF provides an average of 1,300 consultations per week to the displaced and resident populations, mainly for malaria, sexually transmitted diseases and respiratory infections. In recent days, access to the communities of Imese and Enyele in the south of Dongo province has improved. Recently, an MSF medical team assessed the situation in Enyele, where the situation is calm and most of the population that had fled fighting in that area has been able to return. However, armed operations are continuing further south in the province, in the swampy areas near Buburu and Bomongo.

Early in January 2010, MSF warned of the need to guarantee protection to the refugees who had fled the violence in Equateur Province. A retrospective mortality survey conducted by MSF’s epidemiological research centre (Epicentre) estimated at 1,500 the number of deaths due to violence in Equateur Province over a seven-day period between October 28 and November 3, 2009. The UNHCR mandate is to protect populations who flee a country because of direct violence or well-founded fears. On the other side of the border, in the Republic of Congo, UNHCR refugee registration began several weeks ago, but no one has yet been given refugee status. Such status is intended to ensure respect for the basic human rights of persons who are vulnerable and to guard against involuntary returns of refugees to a country where they are at risk of being persecuted.