Republic of Congo: A Harsh Status Quo For Refugees From The DRC

The health situation for more than 100,000 refugees from the DRC gathered on the Republic of Congo side of the Ubangi River has not improved, and could worsen. 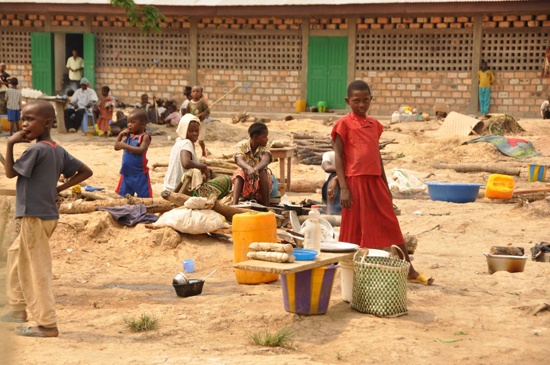 Approximately 110,000 people from the Equateur region of the Democratic Republic of Congo (DRC) are still gathered on the Republic of Congo (Congo-Brazzaville) side of the Ubangi River. For now, their prospect of returning home is dim, but the health and humanitarian situation has barely improved in recent months and could worsen. Below, Doctors Without Borders/Médecins Sans Frontières (MSF) program manager Isabelle Mouniaman discusses the situation:

What is the current situation in Congo-Brazzaville?

Since October, when clashes occurred in the Equateur region of the DRC, the situation has barely changed for the 110,000 people who have sought refuge in an area running north to south along the Ubangi River, in neighboring Congo-Brazzaville. The U.N. High Commissioner for Refugees has identified 55,000 people in Bétou district, in the north, but they do not yet have refugee status and are currently entitled only to a card authorizing them to receive distributions of food and basic supplies.

In Ipfomdo district, in the south, registration was halted because of insecurity in the Mbandaka region. Approximately 34,000 are believed to be living in that area. Approximately 17,000 refugees are thought to be living In the Liranga region, in the southernmost part of the district. One of our teams went out to the field and we're waiting for them to give us more information on the situation.

What are the issues in the coming months for the region?

The key problem in Likouala, which is extremely isolated, is aid delivery. The logistics are very complicated, and deliveries can be made only by canoe and whaling boat. The World Food Program thus has a hard time getting food aid there. Only 200 tons have reached Bétou, and that's not enough. Some 100,000 people are swelling the population in the local villages, sometimes doubling or even quadrupling the numbers. Even if people in these villages do help the newcomers, they have little they can share. Some women are starting to go back across the river to farm their land or to the markets on the DRC side, but they return to Congo-Brazzaville before nightfall.

You can see that people have moved in, that the schools are operating, and that no one really intends to go back. On top of the problems with aid deliveries, the rainy season is approaching, malaria spikes could follow, and access to water is limited to the river and a few wells or pumping stations for drinking water. So, yes, the population's health status could worsen in the coming months, particularly in terms of children's nutrition.

What is MSF doing right now?

We've opened two large projects. The first is in Bétou and the second is in Ipfomdo. In both cases, we are working in several hospital departments and we've developed mobile and fixed consultation sites so that we can see patients in the villages along the river. In Bétou, we have admitted nearly 1,000 patients to the hospital since January and have conducted more than 38,000 medical consultations. Operations in Ipfomdo are on a smaller scale, with the hospital occupancy rate at 65 percent. We've also launched two evaluation missions around the town of Mobenzelé, 90 kilometers (54 miles) north of Ipfomdo, where 17,000 people are reported to have taken refuge. Based on the results of those evaluation missions, we may shift our presence toward the south. In all cases, MSF projects will be significant in the coming months and our teams will keep a close eye on the situation as it continues to develop.