Over a month after Kenya's disputed election, the repercussions continue to be felt throughout the country. According to the Kenyan Red Cross, more than 1,000 people are thought to have been killed and 300,000 displaced. Doctors Without Borders/Médecins Sans Frontières (MSF), which has worked in Kenya since 1992, flew in emergency staff to help respond to the crisis. 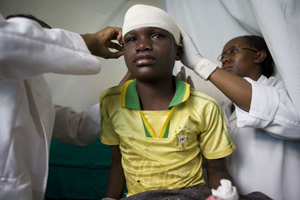 Over a month after Kenya’s disputed election, the repercussions continue to be felt throughout the country. According to the Kenyan Red Cross, more than 1,000 people are thought to have been killed and 300,000 displaced. Doctors Without Borders/Médecins Sans Frontières (MSF), which has worked in Kenya since 1992, flew in emergency staff to help respond to the crisis. As well as adapting long-running HIV/AIDS projects to provide care for victims of violence, new projects have been set up in the west of the country to provide assistance to the thousands of Kenyans living in internally displaced person’s (IDP) camps, as well as the hundreds who are trapped in rural areas with little or no aid.

In order to care for people wounded during protests and general insecurity, MSF set up first-aid posts in its clinics in Kibera and Mathare slums. As it is often difficult for people living in these areas to move around or get to the clinics, an additional clinic was opened in Huruma. MSF staff supported Masaba hospital near the Kibera slum and medical supplies were donated. In both areas MSF teams go out to bring patients to the health centers. Between January 16 and February 4, 150 trauma patients were treated by MSF in Mathare, 60 of whom were referred to a hospital. Although the situation in Nairobi is calmer, MSF staff are seeing new cases every day.

People are still being displaced and many are repeatedly moving to different areas in search of security. In Nairobi, people are once again arriving in Jamhuri Park, a stadium where many displaced people sought refuge in early January. As a number of other organizations are present providing assistance, MSF teams will visit twice a week to provide antiretroviral (ARV) therapy for people living with HIV/AIDS and do consultations.

MSF teams have also visited a number of sites on the outskirts of Nairobi where displaced people have gathered. Kikuyu Town, Zambezi, Limuru, Ruiru, Juja, and Thika have been assessed. Staff will continue to monitor the situation, particularly with regard to displaced people living with HIV and TB and the levels of care and assistance they are receiving.

After some disruption, MSF’s clinics providing HIV/AIDS, TB, and primary health care in Kibera and Mathare slums are resuming normal activities. However the number of regular patients attending appointments has dropped, as has the number of new patients. In January four times more patients missed appointments at MSF clinic in Kibera South than in October 2007. Whereas staff in these clinics would normally enroll 100 new HIV patients per month in the program, in January just over 60 new patients were enrolled at Kibera South

Caring for Victims of Violence

Between January 25 and January 27, the towns of Nakuru and Naivasha experienced violent clashes. Hospitals in both towns were faced with an influx of wounded people needing care, roadblocks and insecurity preventing many Ministry of Health (MoH) staff from accessing the hospital, and some essential supplies running low. In Nakuru, MSF teams responded by reinforcing the hospital where 157 people needed surgical care over the course of two days and flew in essential surgical supplies by helicopter.

An MSF team traveled to Naivasha hospital from Nairobi on January 28. On arrival they found 30 wounded patients, the majority of whom had suffered beatings and machete wounds as well as some gunshot wounds. An MSF anesthetist, nurse, and doctor were called in from Nairobi and arrived a few hours later. Six seriously injured patients were referred to Nairobi and the team helped to treat the remaining patients.

Around 8,000 people are thought to be living in Nakuru stadium. MSF has focused on providing medical care and staff have done 541 consultations so far, mainly for respiratory tract infections. In Naivasha, most displaced people are living in two sites, the police station and the prison. At both sites MSF has supplied clean water, dug latrines and waste pits, built showers, and distributed soap and blankets. Medical staff have also done consultations, seeing a total of 152 patients on February 2 and February 3 at the police station and 89 patients at the prison on February 3. To the west, in Kericho, MSF teams are working on water and sanitation, and distributing blankets and plastic sheeting to around 2,500 people in two sites.

Around the town of Kitale, MSF teams have helped build camps in Cherangani and Endebess. In total 2,370 tents have been built, providing shelter to the 6,700 people living in Cherangani camp and the 6,500 in Endebess. Essential items such as plastic sheeting, jerry cans to hold water, and cooking sets have been distributed in both sites and MSF has worked to provide clean water by installing water bladders and showers, and digging latrines. In Endebess, medical staff have begun training community health workers to provide assistance, with a particular focus on pregnant women and people suffering from stress. Teams have also started working in Kitale showground, where around 500 families are living. The team is building tents and improving the water and sanitation facilities.

On January 21, MSF handed over its activities in Eldoret after providing assistance to displaced people in 12 sites in Eldoret town and the surrounding villages, including Burnt Forest, Turbo, and Napkoy. As more agencies arrived in Eldoret and security seemed to be improving, MSF handed over its activities. However a team has since returned to assess whether further assistance is needed, particularly for those displaced people living outside of the main camps.

Mobile clinics continue to visit several locations in western Kenya, specifically rural areas where MSF has identified pockets of displaced or isolated people living with little or no assistance. In some of these areas, violence is ongoing. In Molo District, teams treated 2,173 patients between January 7 and January 20, however as the security situation worsened MSF had to suspend these mobile clinics between January 23 and February 5. Teams are also visiting sites around Nakuru town to evaluate the needs for additional mobile clinics and plan to visit Kuresoi Division in the coming days.

In Kisii non-food items are being distributed and donations of medical materials have been made to Kisii hospital. In Londiani and Kipkelion districts mobile clinics conduct consultations in various locations and support is given to primary health care facilities through the donation of medicines. Some 950 children have been immunized and MSF teams have provided clean water and distributed non-food items in eight different sites.

MSF mobile teams in the Mount Elgon area, continue to provide free quality medical care (primary health care) and support immunization activities for people who have been displaced by ongoing clashes over land.

In Kacheliba, Pokot District, MSF has been treating people infected with visceral leishmaniasis, also known as kala azar, since the end of 2006. Activities in this region have not been affected by the insecurity and violence in other parts of Kenya and teams continue to treat patients infected with this potentially fatal disease.

Long running HIV/AIDS projects in both Busia and Homa Bay continue as normal.