Responding to Urgent Nutritional Needs on the Outskirts of Mogadishu

An MSF assessment finds alarming malnutrition rates in many parts of the country, including the outskirts of Mogadishu. 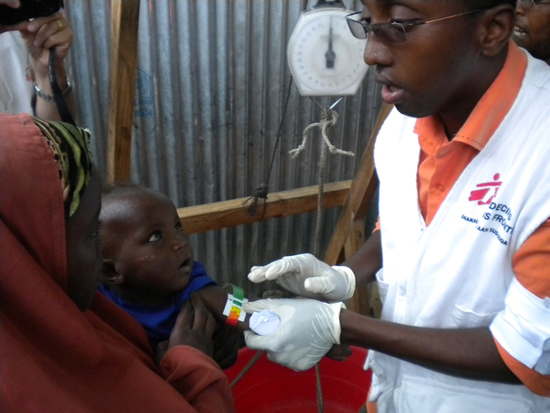 An MSF staff member measures a child's mid-upper arm circumferance to check for malnutrition in Mogadishu.

Years of intense violence, drought, malnutrition, and infectious disease have wrecked the Somali health system and displaced thousands of Somalis from their homes. While food security seems to have improved since 2011, a Doctors Without Borders/Médecins Sans Frontières (MSF) assessment shows that malnutrition rates are still alarming in many parts of the country, including the outskirts of Mogadishu.

According to this assessment, one in four children living in camps outside the Somali capital are malnourished. In response to this critical situation, an MSF team launched an emergency three-day intervention to provide urgent nutritional treatment and on-site medical care to children under the age of five.

Over three days, 1,500 children were screened for acute malnutrition and 396 were admitted to MSF’s nutritional program, 70 of them with severe acute malnutrition. The MSF team also provided emergency medical care to 162 children, referring 25 of them to the MSF pediatric hospital in Mogadishu’s Hamar Weyne District. Most were suffering from respiratory tract infections, skin diseases, and/or diarrhea. Additionally, some 380 children were immunized against measles, diphtheria, tetanus, whooping cough, and polio.

The continuing insecurity in most parts of the country and restrictions of access for humanitarian workers remain major obstacles to MSF’s medical assistance in Somalia. In this challenging environment, the organization is constantly adapting its medical response. With a restricted ability to conduct proper assessments and respond to any new acute situations, MSF teams are forced to implement limited interventions, with a focus on only the most critical medical needs.

In October 2011, two MSF aid workers, Montserrat Serra and Blanca Thiebaut, were abducted from the Dadaab refugee camps in northeastern Kenya while carrying out emergency assistance for the Somali population. They remain in captivity, and MSF—while still responding to acute crises—has suspended the opening of any new non-emergency projects in Somalia until their release.

MSF has worked continuously in Somalia since 1991 and currently provides lifesaving medical care to hundreds of thousands of Somalis in ten regions of the country, as well as in neighboring Kenya and Ethiopia. Over 1,400 staff provide a range of services, including free primary health care, malnutrition treatment, surgery, water, and relief supply distributions and assistance to displaced people. MSF relies solely on private charitable donations for its work in Somalia and does not accept any government funding.