The Risks of Childbirth in Somalia

Giving birth in Somalia is incredibly dangerous, but it's made slightly less so by the huge efforts of MSF’s Somali staff. 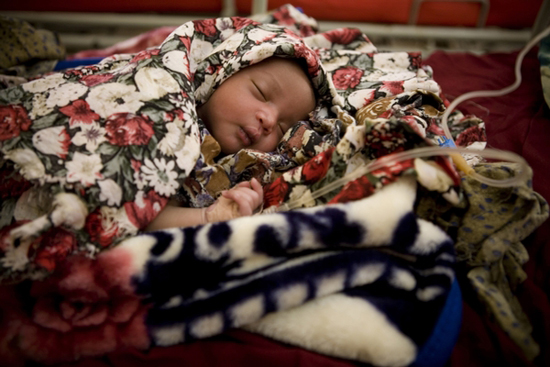 A baby rests in the inpatient post-natal department of MSF's Galcayo South hospital.

Doctor Hamida Shakib Mohamed just helped deliver a healthy boy weighing 3.6 kilograms [about 8 pounds]. It’s a good thing the mother made it to this health center; it was a difficult labor and she needed the assistance of a skilled birth attendant using a vacuum device to complete the delivery. She lives in a village about 110 kilometers [about 68 miles] north of here, but her father insisted she make the trip. He appreciates the Doctors Without Borders/Médecins Sans Frontières (MSF)–supported services here after his wife was treated for post-partum hemorrhaging just a few months ago. "We give the right care," says Dr. Hamida, "so people come to us."

Last December, MSF expanded its medical services in Galcayo North to include maternity and obstetric care. The number of deliveries has since boomed to about 200 per month, with many mothers coming from increasingly far away. Dr. Hamida is happy about that. She’s Somali, educated in Mogadishu in the 1980s, but holds a foreign passport and has lived abroad for most of the past two decades. "Now that my children are grown," she says "I’m free and I want to give my energy to the Somali community." She couldn’t be more needed.

Insecurity in Somalia prevents MSF and others from keeping international staff on the ground for very long, and some places are completely inaccessible, so MSF relies on its Somali staff for the bulk of its work. It’s a challenge to keep standards up, but through intensive training courses, on-the-job coaching, and advice from experts based outside Somalia, dedicated staff like Dr. Hamida keep the quality up. Dr. Hamida says she recently delivered a baby—whose head got stuck during labor—using forceps for the first time with step-by-step telephone assistance from a more experienced MSF doctor based in Nairobi.

Most of the patients are happy to be here. Almost all of them echo Shamso, who gave birth to her third child last night. She says, “I know I can get good health care here.” It’s also free of charge, an important factor for most of the women who come for treatment. She comes from Galcayo and she didn’t have any complications before or during labor.

Not all of the patients here are as lucky as Shamso. Somalia's maternal mortality rates are among the highest in the world, and the trials faced by many women giving birth here are immense. Down the hall, a very young woman recovers after losing her baby in labor. She arrived two days ago with eclamptic fits. A Caesarian section was indicated, but in Somali culture such a procedure cannot be carried out without the consent of the husband. He could not be found in the displaced persons camp on the outskirts of town where they live, and although mobile phones are common in Somalia, no one had his number, not even his wife. An uncle showed up, but he could not give consent because he was from the mother’s side of the family. Another uncle from the father’s side finally consented after 12 hours of labor. By then, the baby had died.

A woman who came from Ethiopia yesterday after four days of labor rests in the next room. Her baby died shortly after birth. She’s passing urine unchecked and the midwife thinks she may have a fistula. Vaginal fistulas that leave women incontinent and in pain are common in Somalia. They are often caused by obstructed labor, but they can also be caused by rape. A few weeks earlier, an unaccompanied woman traveling to Galcayo from Mogadishu was taken by five men, held for three days, and repeatedly raped. She arrived in in the health center five days later after relatives in the displaced persons camp told her she could get help here. She was too late to receive precautionary prophylaxis for HIV, but MSF staff were able to provide counseling, prevention for pregnancy and sexually transmitted infections, and treatment for her fistula.

Traditional practices can also sometimes complicate childbirth. Female circumcision is common in Somalia and can sometimes increase the risk of obstruction or bleeding during labor. A mother recently came to the MSF clinic after first seeking the help of a traditional birth attendant (TBA) who cut her badly in an attempt to extricate the baby from a circumcised and narrowed passageway. By the time she arrived at the health center she was in shock and needed a blood transfusion and extensive repair. MSF is now trying to work more closely with TBAs, providing training on early recognition of complications and encouraging early referral for high-risk deliveries.

Giving birth in Somalia is risky, but providing maternal care can be dangerous too. “Security is shaky,” says Dr. Hamida. Last Friday she was called into the clinic at night to assist with a retained placenta. On the way to the hospital, a drunken policeman stopped her and her staff, brandishing an AK-47. He told everyone to get out, but luckily waved them on after it was explained that the doctor was needed for an emergency at the hospital. After a blood transfusion, Dr. Hamida was able to stabilize the patient. Despite the danger, Dr Hamida is happy to be here. She smiles and says she’s “paying back to the community.”

Without the dedicated work of employees like Dr. Hamida, MSF would not be able to continue running its programs in Somalia. Maternal care is only one of MSF’s numerous medical activities throughout the country, but Somalia's extremely high maternal mortality rates—more than one mother dies for every hundred children born—make it an essential part of MSF’s health care efforts. Giving birth in Somalia is incredibly dangerous, but it's made slightly less so by the huge efforts of MSF’s Somali staff.

From May to December 2011, MSF ran 22 projects in many different parts of Somalia and in refugee camps for Somalis in Ethiopia and Kenya. In this period, during the height of the refugee crisis, MSF treated over 78,500 patients for severe malnutrition, over 30,000 for moderate malnutrition, over 7,200 patients for measles, and vaccinated over 255,000 persons against disease in the Horn of Africa. MSF assisted in over 6,000 deliveries and provided over 537,500 out-patient consultations.

The war in Somalia is now entering its twenty-first year. After the drought and the enormous crisis of last year, people are still highly vulnerable to infections, disease, and malnourishment.

MSF will not step up its activities or open up new projects in Somalia until its two colleagues—Montserrat Serra and Blanca Thiebaut, abducted in Dadaab and held in Somalia since October 2011—are reunited with their families.