Research presented by Epicentre, MSF's epidemiological research arm, and other African researchers adds to evidence that the two existing rotavirus vaccines may not be best adapted for use in Africa. 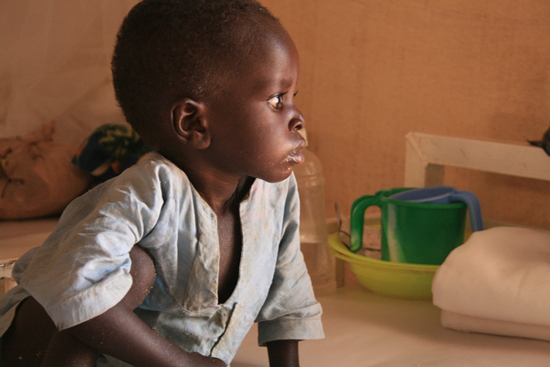 Cape Town/Geneva/New York, November 8, 2012—Research presented today by Epicentre, the epidemiological research arm of Doctors Without Borders/Médecins Sans Frontières (MSF) and other African researchers, contributes to the growing body of evidence that the two existing rotavirus vaccines may not be best adapted for use in Africa.

“Vaccine developers have not taken into account the full rotavirus picture in places that are hardest hit by diarrheal illness and deaths caused by rotavirus,” said Dr. Anne-Laure Page, an epidemiologist at Epicentre. “This study adds to the growing body of research that underscores the need to ensure that vaccines are developed that effectively address the needs of developing countries.”

The research includes two years of surveillance data of over 10,000 children with severe diarrhea in Niger. Stool samples were collected from all children under 5 years having diarrhea with moderate or severe dehydration and tested for rotavirus using a rapid diagnostic test. The data confirms that rotavirus is an important cause of severe diarrhea in Africa; 30.4% of the cases in the study were associated with rotavirus. However, the two existing vaccines that aim to prevent the disease (GSK’s Rotarix and Merck’s RotaTeq), do not contain genotypes of rotavirus most commonly documented in the study.

The two available rotavirus vaccines were developed and tested in industrialized countries, and have an efficacy rate of 90 percent against severe diarrhea in these countries, compared to an estimated 50-60 percent in countries in Africa and Asia. The current vaccines are also bulky and have a limited shelf life at room temperature, further making them unsuitable for developing countries that lack adequate refrigeration capacity.

“Right now, vaccines are mainly developed for industrialized countries and then used in Africa and Asia at a later stage, whether they’re adapted to those contexts or not,” said Kate Elder, Vaccines Policy Advisor with MSF’s Access Campaign. “We need to see a paradigm shift in vaccine development, with the specific needs of developing countries incorporated into research and development from the very start of the process.”

A study in Uganda is looking to address the burden of pneumococcal disease in vulnerable populations by delivering one dose of pneumococcal conjugate vaccine (PCV) to a wide age range, instead of a three-dose schedule to young children. There is presently no WHO recommendation or global policy on the use of PCV in crisis-affected populations. The results of this research may be applied to routine programs, in addition to interventions in crises.

Another Epicentre study in Chad is looking at use of the tetanus toxoid vaccine in a flexible cold chain, because keeping vaccines cold represents a major logistical obstacle to vaccinating children in many remote and rural settings.

“The fact that currently available vaccines are not easy to use in the places that are hardest to reach contributes to the fact that 22 million children born each year do not receive even the basic vaccination package,” said Elder.