Running for Their Lives: Civilians Violently Displaced in the DR Congo's Katanga and North Kivu Provinces 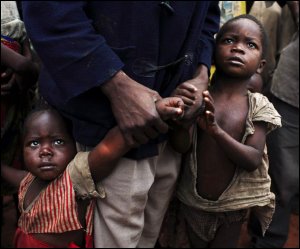 Newly arrived refugees wait to be registered in a makeshift camp in Dubie, Katanga province in Democratic Republic of Congo.

Over the last twelve months, more than 100,000 people have been displaced from their homes in the Democratic Republic of Congo's Katanga province as a result of fighting between the Congolese army, known as the FARDC, and the so-called Mai-Mai militia. Already impoverished and traumatized, these civilians have fled after seeing their houses burned, and in some cases having family members killed and raped in front of them. They have lost most, if not all, of their possessions. Many have been displaced multiple times. The displaced civilians are now struggling to survive in the forests, makeshift camps, and overcrowded towns, where they are enduring cholera outbreaks, malaria, and a lack of food.

"We lived in the forest for six months because we were too scared to go back to our village," says Ngombe Kangula, chief of Kitondwa, a village in the northeast of the Democratic Republic of Congo's vast and mineral rich Katanga province. "I lost my wife because there was no medicine. I have only one child left, the other four are all dead."

Many children, especially those younger than one year old, died during their journey, as evidenced by the lack of infants among the displaced populations in the areas where Doctors Without Borders/Médecins Sans Frontières (MSF) medical teams are present. MSF teams are providing assistance in Mukubu, Nyonga-Upemba, Pweto, Dubie, Kikondja, and Mitwaba, bringing relief to tens of thousands of displaced.

Meanwhile in the DRC's North Kivu province, despite a heavy deployment of UN peacekeeping contingents, insecurity and violence have set the whole region ablaze. In just over one month, heavy fighting in the Rutshuru and Beni regions have lead to more than 80,000 people being displaced either within North Kivu or across the border as refugees in Uganda. Though the fighting has stopped around Beni, and the displaced and local residents have access to basic medical care, the ongoing harassment and insecurity by the armed groups prevents them from moving freely to harvest their fields. 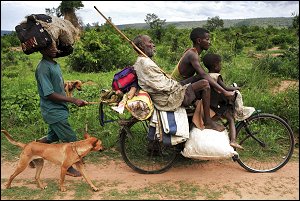 A refugee family arrives by bicycle in Dubie, Katanga province in Democratic Republic of Congo.

Since January 19, fierce combat has erupted in the Rutshuru district of North Kivu province. The fighting which started in the village of Bunagana, has currently spread north on the route to Kayna to the towns of Kibiridzi and Rwindi, where UN peacekeepers have also taken part in the fighting. Government soldiers and dissident groups are now also fighting over the control of Rutshuru town.

The Rutshuru area has been particularly violent and unstable, leading MSF to open a project in August 2005 to support the surgical, pediatric, and internal medicine wards of the general referral hospital in Rutshuru, and to provide much needed primary health care and a referral system to the population of Katwiguru health zone. However, it has been more than a year since such heavy fighting erupted in the region provoking so much displacement.

This most recent upsurge of fighting in Rutshuru comes only a month after military operations in the territory of Beni provoked the displacement of 36,000 people. In December 2005, military operations by the Congolese armed forces (FARDC) and the MONUC (UN peace keeping mission) to flush out Ugandan rebel fighters (NALU) provoked forced displacement along the Beni – Erengetti road. MSF has now returned to work in this area, bringing medical care to the town of Linzo where 2,200 displaced families are residing.