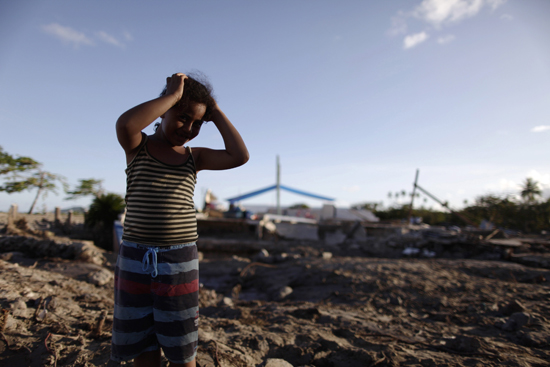 A child reacts in front of the remains of her tsunami-destroyed home on the southern coast.

After nearly a week of assessments carried out in Samoa following the tsunami of September 29, a small team from Doctors Without Borders/Médecins Sans Frontières (MSF) has found that the vast majority of medical and non-medical needs have been covered. An impressive international aid response has meant that food, water, and clothing have been distributed, and people who required urgent medical care have received it.

The MSF team has visited the southern coast of Samoa, the area which took the full impact of the tsunami. Assessments have also been carried out on Manono Island.

As people begin to build their lives again, the psychological impact of such significant loss of life and belongings is being felt. “Obviously people are traumatized,” said Veronique de Clerck, MSF’s emergency coordinator in Samoa. “They have lost all their assets and some people have lost a large number of family members. There was one family we heard of who lost 13 members.”

In the next week, an MSF psychologist will provide training for a team of Samoan counselors who will offer psychosocial support for people impacted by the disaster.

Once psychological training has been delivered, MSF is prepared to leave Samoa by mid-October. “It was good to do an assessment after this natural disaster,” said de Clerck. “The most valuable information is found within the community and it is always important to see the situation of the people with our own eyes. They have lost pretty much all their assets, so it is important to see what state they are in, and what their medical and non-medical needs are.”

The official death toll in Samoa stands at 137, with eight people missing and 71 people seriously wounded.