Sleeping Sickness: Is The End In Sight?

Though the WHO announced that the reported number of new cases of sleeping sickness has has dropped below 10,000 for the first time in 50 years, sustained research and development for new diagnostics and treatment remain an urgent priority. 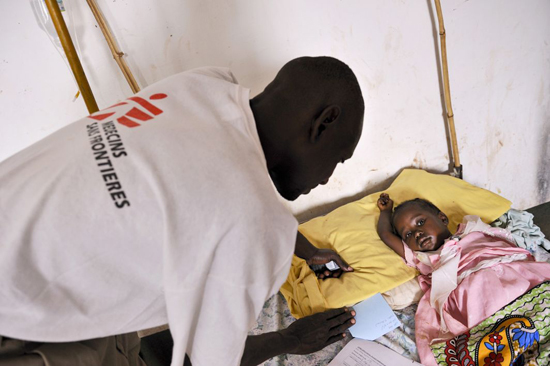 An MSF nurse cares for a child infected with sleeping sickness in Yambio Hospital, South Sudan.

In June 2010, the World Health Organization (WHO) announced that the reported number of new cases of sleeping sickness, or human African trypanosomiasis (HAT), has dropped below 10,000 for the first time in 50 years. There were 9,877 reported cases of the disease in 2009 compared to 17,600 in 2004. The WHO is justifiably proud of this achievement and says that it aspires to eliminate the fatal and much neglected disease altogether. However, the reality is that no one knows exactly how large a public health threat sleeping sickness continues to be as the disease is still highly prevalent in an unknown number of remote and neglected areas of Africa.

Sleeping sickness, a parasitic disease transmitted by the bite of the tsetse fly, is 100 percent fatal if left untreated. Over the past century the disease has ravaged Africa with severe epidemics in Kenya, Tanzania, Uganda, Nigeria, and Democratic Republic of Congo (DRC). The disease has had serious socio-economic consequences, wiping out families and communities. By the 1960s, sleeping sickness was brought under control and regarded as a public health problem of the past. But complacency and neglect led to its re-emergence in the mid-1970s.

Doctors Without Borders/Médecins Sans Frontières (MSF) has found that the disease is still affecting hundreds of people. In recent years, MSF had projects to detect and treat sleeping sickness in Haut-Uélé, Orientale province, in DRC. In that time, medical teams found areas of high infection; approximately 3.4 percent of the 46,601 people screened (1,570 cases) tested positive and were treated. Conflict in the area, however, forced MSF to cease its activities in March 2009. Since then, countless infected patients have gone without the treatment they need.

Conflict is also fueling the spread of sleeping sickness. People displaced by fighting can carry the parasite to new areas, reactivating the disease in regions where it had previously been eradicated. The disease may spread, for example, when an uninfected fly bites an affected person and in turn infects another person.

The size of the problem is unknown, but tools to address it are also sorely lacking. Diagnostic measures are outdated: for patients with suspected sleeping sickness, a lumbar puncture is the only way to determine whether they are in the early or late stage of the disease. Until last year, the only treatment for late stage (stage 2) sleeping sickness was melarsoprol—a 20 year-old, highly toxic arsenic-based treatment that kills between 3 and 10 percent of patients. At the end of 2009, a new combination treatment called Nifurtimox Eflornithine Combination Therapy, or NECT, was introduced in several countries, representing an important step forward. However, the treatment still requires patients to spend 10 days in the hospital and is not available everywhere.

Sustained research and development for new diagnostics and treatment is still an urgent priority. Over the past 25 years, MSF has treated nearly 50,000 cases and remains one of the leading organizations to respond to outbreaks. MSF currently has projects in DRC, the Central African Republic, Chad, and is restarting activities in Uganda, which has seen serious epidemics in the past. Further sustained effort is essential before we can claim that we are on the pathway to elimination of sleeping sickness.