Somalia: 23 Women and Children Injured By Shelling in Mogadishu

MSF treated 42 people wounded in fighting Mogadishu this past weekend, 23 of whom were women and children under the age of 14. 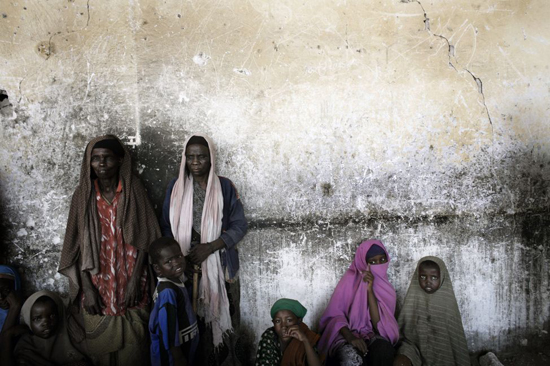 Somalis awaiting care for malnutrition at an MSF facility in 2008.

As fierce fighting again gripped Somalia’s capital, Mogadishu, Doctors Without Borders/Médecins Sans Frontières (MSF) admitted 42 people suffering from blast injuries to its hospital in the Daynile area of the city between Thursday and Friday. Of the 42 people treated in the hospital’s emergency room, 23 were women and children under the age of 14.

“This is the highest number of injured women and children we have received in 24-hour period in the past four months,” said MSF Head of Mission Axelle de la Motte St. Pierre. “Many suffered very severe wounds."

Since the beginning of the year, 450 war-wounded women and children have been admitted to Daynile Hospital—a stark indication of the very high price still the civilian population continues to pay in the ongoing conflict.

At a time when fighting is raging and medical facilities are being hit in Mogadishu, MSF calls upon the belligerents to the conflict to take all measures to avoid civilian casualties and to respect the protected status of medical facilities.

MSF is an independent medical organization with projects in eight regions of Somalia. More than 1,500 Somali staff, supported by approximately 90 staff in Nairobi, provide primary health care, malnutrition treatment, surgery, support to displaced people, and water and relief supplies. MSF does not accept any government funding for its projects in Somalia. Donations come from individuals around the world.