With intense fighting raging in Mogadishu, MSF's Daynile Hospital treated the largest influx of wounded people it has seen since the beginning of the year. 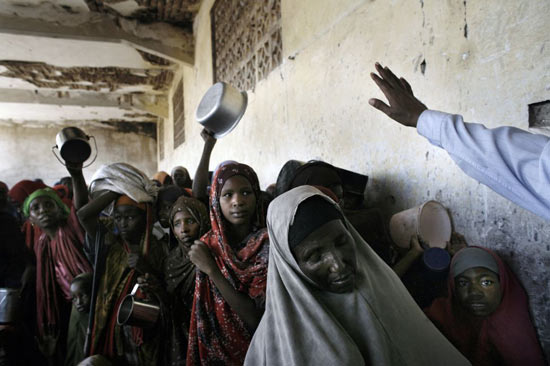 In 2008, woman displaced by the kind of fighting raging again today in Mogadishu waited for food that was being distributed by a local NGO.

With intense fighting raging in Mogadishu, Doctors Without Borders/Médecins Sans Frontières (MSF) medical teams treated 127 casualties in Daynile Hospital in the three-day period between Monday, August 23 and Thursday, August 25. This is by far the largest influx of wounded people MSF hospitals have taken in since the beginning of the year, a result of the substantial escalation of the fighting in Mogadishu this week.

MSF is sending additional drugs and medical equipment to the hospital to support the medical team. A third Somali surgeon is scheduled to join the team on Thursday to provide much-needed relief to MSF teams that have been working around-the-clock since Monday.

“Our staff in Somalia is treating the war-wounded and doing its best to meet the massive medical needs in this increasingly volatile situation,” said MSF’s Head of Mission Thierry Goffeau. “We are relying on shipments of additional medical supplies and have set up tents outside the hospital to handle the overflow of patients.”

All the injuries were the result of blast or gunshot wounds. People suffered multiple injuries, predominantly wounds to the abdomen, lower limbs, and chest. So far, 22 patients have required immediate surgical intervention. Eight patients died as a result of their injuries, with four of these patients dying upon arrival.

“Thanks to the hard work of our staff in Mogadishu, we can continue to provide life saving surgery to the Somali population in the midst of this fighting,” Goffeau said.