Somalia: Civilians Continue to Bear Brunt of Warfare in Mogadishu

A high proportion of civilians, including large numbers of women and children, bear the brunt of ongoing warfare in Mogadishu. 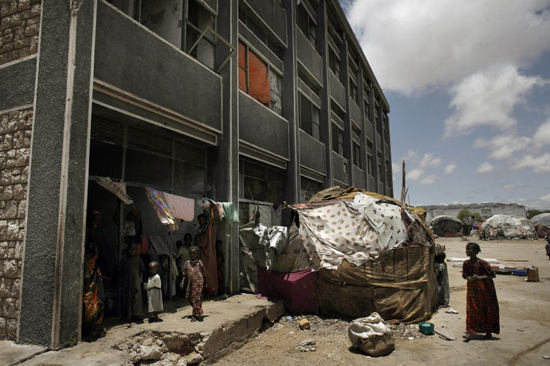 Women and children living in an abandoned building after being displaced by the fighting in Mogadishu.

A very high proportion of civilians, among them large numbers of women and young children, are bearing the brunt of ongoing extreme warfare in Somalia’s capital, Mogadishu, with many suffering catastrophic injuries.

Medical data gathered at the Doctors Without Borders/Médecins Sans Frontières (MSF) hospital in the Dayniile neighborhood on the outskirts of Mogadishu reveal an alarming pattern over the first seven months of the year.

Of 2,854 patients treated by MSF medical teams at Dayniile Hospital, 48 percent suffered war-related injuries. In the 84-bed hospital, 64 percent of the war-wounded patients sustained serious blast injuries, largely consistent with continuous intensive mortar fire in residential areas of the city. Notably, 38 percent of the people with war-related injuries were women and children under 14 years of age.

“As the fighting continues, more and more civilians are being admitted to Dayniile Hospital with horrible injuries,” said Dr. Naidu Uday Raj, MSF medical coordinator for Somalia. “People are arriving at the hospital with serious blast wounds and high-velocity gunshot injuries, including severe fractures. Many people require surgery. Women and young children continue to bear the brunt of the violence.”

The latest illustration of the how violence permeates daily life for civilians living in Mogadishu occurred on July 27, when 45 people were brought to Dayniile Hospital following heavy shelling between armed opposition groups and the Transitional Federal Government (TFG) and the African Union Peacekeeping Force (AMISOM). Over half of the patients, 26 people, were women and children under 14.

The most recent medical data are consistent with numbers gathered since MSF started its surgical program in Dayniile in September 2007, underscoring the tremendous human toll Somalia’s unremitting conflict continues to exact. To date, 11,888 people have been treated at Dayniile Hospital with more than 50 percent of patients suffering from war-related injuries.

MSF calls upon all parties to the conflict to take all measures to minimize civilian casualties and to respect the protected status of medical facilities.