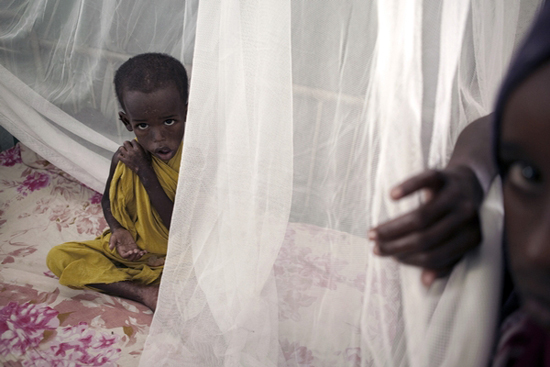 A four-year-old boy suffering from measles and malnutrition waits for his medicine in Banadir hospital in Mogadishu.

Measles is sweeping unchecked through parts of southern Somalia. The disease is highly contagious and unvaccinated children are at great risk, especially if they are also malnourished. The war in southern Somalia is a key factor contributing to ongoing widespread malnutrition, low vaccination coverage, and lack of access to health care services. All of these factors aggravate the spread and severity of diseases like measles.

In some Doctors Without Borders/Médecins Sans Frontières (MSF) programs, the number of measles cases has sharply increased in recent days and weeks. Many patients arrive in severe condition.

"Over the last weeks, we diagnosed and treated over 300 patients for measles—mainly children—in the towns of Haramka and Marere in Lower Juba Valley," said Silvia Colona, MSF's project coordinator for southern Somalia. "We also set up a measles treatment unit in the city of Kismayo last week, and it filled up immediately with critically ill children."

Left untreated, measles is often deadly, especially for young children, but with adequate medical care most survive. "I knew this was measles," said one mother who brought her child to the MSF measles treatment center in Kismayo, "but I did not know where to treat my child until my relatives informed me of this measles camp."

Unfortunately, lack of awareness and insecurity are probably preventing many others from getting treated. "We think this is only the tip of the iceberg," added Ms. Colona, "and that there are many more people with measles who can't make it to our facilities."

Measles is easily and cheaply prevented with vaccination, but vaccination coverage is very low in most parts of Somalia. Logistical and security challenges are not the only reason for this. MSF still awaits permission from authorities in several locations to conduct measles vaccination campaigns. If permission is granted, vaccination would become a high priority for MSF and would prevent numerous unnecessary deaths.

MSF remains steadfastly dedicated to providing medical and humanitarian assistance to Somalis inside and outside Somalia. From May to December 2011, MSF treated more than 95,000 patients for malnutrition, and treated more than 6,000 and vaccinated nearly 235,000 children against measles in areas where it was permitted and in refugee camps in Kenya and Ethiopia. In its various health care structures, MSF provided almost 540,000 medical consultations.

Unfortunately the killing of two MSF staff at the end of last year in Mogadishu has caused a reduction in activities in that city. Furthermore, two MSF staff kidnapped in northern Kenya in October have not yet been released. Activities in the refugee camps of Dadaab have been reduced as a consequence. MSF calls on all Somalis—the diaspora, community leaders, and especially the authorities in control of areas in Somalia where our kidnapped colleagues are being detained—to do everything possible to facilitate their safe release.