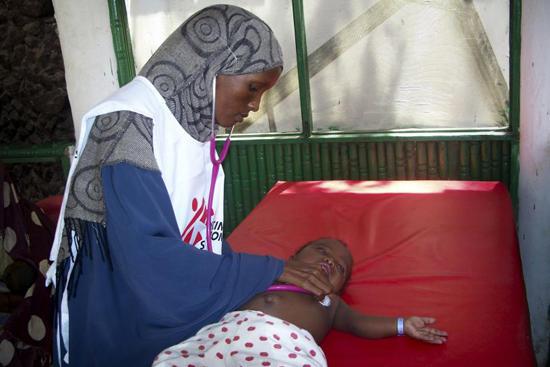 An MSF nurse examines a child in a health center in Mogadishu.

Intense fighting among various armed groups claimed the lives of hundreds of civilians and displaced thousands more in Somalia in the first half of 2009. In addition, prolonged drought and food shortages worsened the already desperate situation of many of the country’s rural communities. The gap between critical needs in Somalia, particularly in and around Mogadishu, and the level of humanitarian response continues to widen, mainly due to aid agencies’ extremely limited capacity to deliver assistance in this highly insecure and volatile environment.

In the first six months of 2009, Doctors Without Borders/Médecins Sans Frontières (MSF) teams working in Somalia experienced numerous security incidents. In April, two staff members were abducted in Huddur, Bakool region and held for 10 days before being released. Following the abduction, MSF felt that it could no longer safely provide quality medical care to the people living in Bakool region and decided to close its largest health center in south and central Somalia and four other health posts in Labaatan Jerow, El-Garas, El-Barde, and Radbure.

In June, an MSF employee died in an explosion in Belet Weyne, Hiraan region, which killed 30 other people. Constant shelling, explosions, and open combat among armed groups pose an enormous challenge to MSF’s efforts to provide free, quality health care to people living in the capital, Mogadishu. In July, for the first time in 17 years, MSF had to suspend activities in its pediatric hospital and three other health clinics in northern Mogadishu as staff were forced to flee for their own safety.

Despite the challenges, MSF remains the main provider of free medical services in all of central and southern Somalia. At the end of June, 1,509 Somali staff, supported by 90 staff in Nairobi, were working to provide primary healthcare, malnutrition treatment, water, relief supply distributions, and support to displaced people in nine regions of the country.

Between January and June, MSF teams provided 376,114 outpatient consultations, including 163,909 for children under five. Over 22,000 women received prenatal care consultations and 13,312 people were admitted as inpatients to MSF hospitals and health clinics. Over 3,000 surgeries were performed, 1,975 of which were for injuries caused by violence. Medical teams treated 255 people for the deadly, neglected disease kala azar, 1,423 people for malaria, and 664 people for tuberculosis. Nearly 19,000 people suffering from malnutrition were provided with food and medical care, and over 125,000 children were vaccinated, including 41,990 for measles.

MSF staff also responded to emergencies in Somalia. In early 2009, renewed fighting in Guri El and Dhusa Mareb prompted thousands of civilians to flee their homes. MSF expanded its regular project in the area and started outreach activities to supply the displaced with water and provide medical care through mobile clinics. MSF responded to outbreaks of cholera, treating 869 people in Jilib and Marere in the Lower Juba region and 61 patients in Jowhar and Mahaday, Middle Shabelle region. Following an increase in the number of measles cases reported in March, MSF started a mass vaccination campaign in Belet Weyne, Hiraan region. Over 26,000 children between six months and 15 years old were vaccinated. In August, MSF will start another measles vaccination campaign, targeting 12,000 children under the age of five in the Lower Shabelle region.

Present in Somalia since 1991, MSF runs projects in:

Daynile Area—The MSF project in Daynile hospital, located five miles north of the city, provides lifesaving emergency surgery and care for war-wounded. Following extensive rehabilitation, the facility now includes 59 beds, and is equipped with two operating theaters, an emergency room and triage area, and an intensive care unit. MSF also supports the general functioning of the hospital financially and through the supply of medical provisions.

Until MSF closed its program in Bakool region at the end of June 2009, the organization was operating a 293-bed health center in the regional capital, Huddur, serving a population of approximately 250,000 people. MSF ran an outpatient department with a maternal and child health component; an inpatient department consisting of adult and pediatric wards, kala azar wards, tuberculosis wards; an outpatient facility; and a therapeutic feeding center. MSF was also running four health posts, three in the Bakool region and one in neighboring Bay region.

In Dinsor MSF runs a 65-bed inpatient department (IPD), which serves the population of the entire district’s approximately 110,000 people. The IPD provides medical care for adults and children, treatment for tuberculosis and kala azar; as well as therapeutic feeding for severely malnourished children with associated pathologies. The outpatient department provides curative and preventive care and includes an ambulatory feeding center for severely malnourished children without medical complications.

In Guri El’s 80-bed Istarlin hospital, MSF provides outpatient services for adults and children and inpatient services including a pediatric ward; gynecology ward; maternity ward and delivery room; operation theater and surgical ward; laboratory; and X-ray facilities. Preventive services, such as prenatal care and vaccination, are also offered. In addition, MSF runs two health posts in Galgaduud: one in Dhusa Mareb, the regional capital, and one in Hinder, which opened in January 2008.

MSF runs a project within the regional 99-bed hospital in Belet Weyne, offering free, secondary level health care to the 280,000 inhabitants of the region. MSF provides emergency and elective surgery, trauma care, medical care for adults, pediatric care, and treatment for severe malnutrition. Emergency and observation rooms are in place. Additionally, MSF is prepared to respond to medical emergencies in the region.

MSF provides primary, secondary, and emergency care in the towns of Marere and Jamaame in the Lower Juba region.

Jamaame—MSF provides outpatient services for adults and children and inpatient care for children, medical and obstetric cases, including treatment for severe malnutrition; nutritional screening and ambulatory care; and systematic surveillance for nutritional emergencies and outbreaks of epidemic diseases.

MSF provides basic health care through a network of four health centers in the rural districts of Jowhar, Mahaday, and Balcad. The health centers provide outpatient preventive and curative services, mother-and-child care, and an extended program for immunization through mobile and fixed clinics. A maternity ward provides services for natural deliveries, Caesarean sections, and family planning, and for victims of sexual violence. There is also a nutritional program including a stabilization center and ambulatory care.