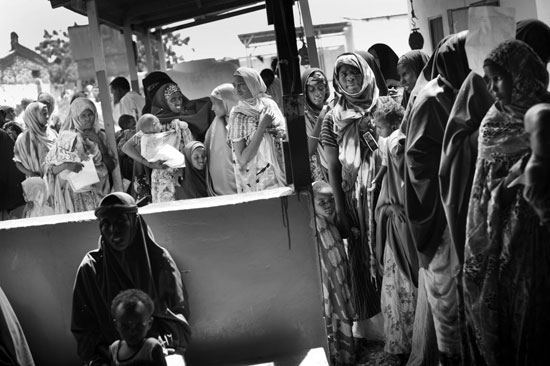 A crowd of mothers and their children wait for consultations at one of MSF's nutrition centers in Galcayo.

The number of children under treatment for severe malnutrition has reached an all time high in Doctors Without Borders/Médecins Sans Frontières (MSF)’s nutritional program in Galcayo, Somalia. More than 1,300 children are now under care in MSF nutritional projects in South Galcayo Hospital and North Galcayo Feeding Center. That is almost half the total number of children treated for malnutrition in the area in all of 2008.

“The situation is alarming,” says MSF’s head of mission for Somalia, Karin Fischer Liddle. “This is the highest number of malnourished children MSF has ever treated in the area. What’s more, we are concerned that not everyone is able to reach us. What we see in our program may just be a fraction of a wider crisis.”

The MSF facility remains the only provider of free medical assistance for hundreds of kilometers around Galcayo. For a long time, insecurity has prevented MSF from running outreach services and transporting patients to and from villages further afield.

“I know many die in the village,” says Ubah, another mother whose child who is undergoing intensive therapeutic feeding and treatment for tuberculosis at the MSF facility. “The journey is not only long, but also expensive, and many can’t afford it.”

The numbers of women clutching malnourished babies in MSF’s packed waiting rooms are increasing. Many have come as a last resort, their sick children having failed to respond to locally purchased remedies and traditional methods of healing.

“In the village there are small pharmacies that sell medicines but there are no prescriptions,” says Fatuma. “If you think it’s malaria you ask for malaria tablets. With this medication some recover but others become more ill and die.”

“Due to the long drought in the area, the biggest problem we now see is severe acute malnutrition,” says Jibril, MSF’s therapeutic feeding center supervisor. Much of the livestock that many Somalis rely on for sustenance and income have died, victims of the drought, which in turn further compounds the effects on humans. “When the weather is hot we see a lot of patients who travel long distances?some from Ethiopia,” Jibril says. “Many of their animals are already dead.”

Children are the worst affected, caught in a vicious cycle of disease and malnutrition. “There are many children who are suffering in the village and who are extremely sick,” Ubah says. “My child’s illness started with measles and she became very weak. After some time she developed blindness and then fell unconscious.”

Thanks to MSF’s committed Somali staff who run the organization’s medical programs throughout Somalia, both Fatuma and Ubah’s children are showing steady signs of improvement.  “We have been here for 15 days now. My daughter is still blind, but otherwise fine. They gave her fluid, vitamins, and therapeutic food. Now her body is better, unlike when I first brought her here. Now she looks more like other babies,” Ubah says.

Countless other children and their families are far less fortunate. “We are extremely limited in our movements due to the heightened insecurity and therefore cannot assess or respond to the medical needs in the wider area,” says Karin Fischer Liddle. “Meanwhile, every indicator points toward a horrifying situation in which countless people, especially children, are suffering silently and without hope of assistance.”

MSF runs nutritional programs in South Galcayo hospital and in North Galcayo. South Galcayo hospital is one of the few centers in central Somalia to offer surgical care—lifesaving emergency obstetric care and treatment for the many people wounded by violence. From January to October 2009, MSF staff treated 4,803 severely malnourished children and 321 victims of violent trauma, and provided 33,700 medical consultations in these facilities. They further delivered 700 babies and vaccinated 6,600 people. In addition, 599 patients were started on treatment for tuberculosis.

MSF runs 10 projects in eight regions across Somalia, thanks to our committed Somali staff, who are supported by a remote management teams in Nairobi.