MSF teams working in Marere, in southern Somalia, are distributing relief items to thousands of displaced Somalis who have found temporary shelter in the nearby town of Jilib. 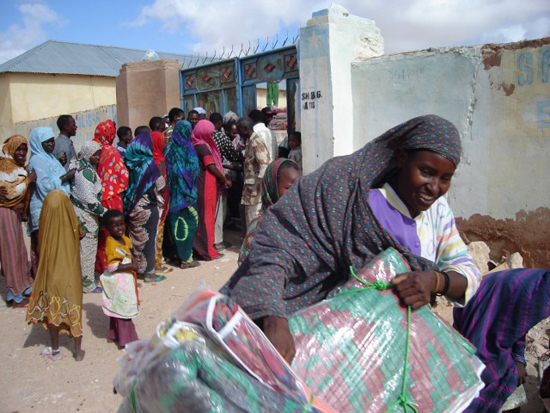 A Somalia mother in Jilib after receiving relief supplies from MSF teams.

Doctors Without Borders/Médecins San Frontières (MSF) has distributed plastic sheeting, mosquito nets, and soap to more than 3,600 displaced Somalis who have found temporary shelter in the town of Jilib, in southern Somalia's Lower Julba Valley. As a prolonged drought carries on, more and more families are leaving their homes and undertaking long, arduous journeys in hopes of finding relief and assistance. MSF was in a position to aid the families in Jilib because the organization runs a hospital and a large therapeutic feeding program for malnourished children in the nearby town of Marere.

"I heard that in Jilib there is a camp [for displaced people] with food distributions and that made us start our trip," said a recently arrived mother of six, who walked for most of the 230 kilometers [150 miles] to reach the camp. "We wanted to go to the Kenyan refugee camps, but we were not able to pay the high price of the transportation. Instead, we arrived in Jilib, hoping to get some assistance. We used to have cows but we lost most of our livestock four months ago. When we lost our last two cows, we set out from our village on foot. It took us 15 days to reach Jilib."

The distribution of relief items is intended to provide urgently needed shelter to people who are forced to live in open terrain and mosquito nets to prevent the spread of malaria. (MSF's Marere facility has of late seen increasing numbers of people in need of treatment for malaria.)

MSF does not accept any government funding for its projects in Somalia; all its funding comes from private donors.