As a food crisis worsens and conflict continues, many people inside Somalia, and in refugee camps in Kenya and Ethiopia, urgently need assistance. 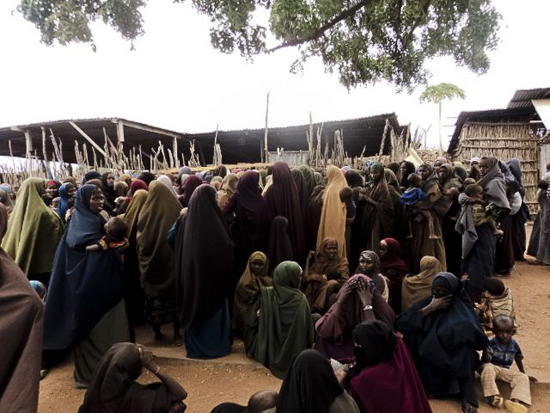 The announcement by Al Shabaab, one of the main armed factions in Somalia, that foreign relief organizations would be welcomed in territories under their control has raised hope that it will be possible to mount a desperately-needed scale-up of assistance inside the country, said the international medical and humanitarian organization Doctors Without Borders/Médecins Sans Frontières (MSF).

The announcement comes at a time of great urgency, when many lives hang in the balance. The eastern regions of the Horn of Africa have experienced consecutive poor rainy seasons, resulting in one of the driest years in decades in many pastoral zones. The impact has been exacerbated by high local cereal prices, high livestock mortality, ongoing conflict, and restricted humanitarian access in some areas. All this is happening against the backdrop of a 20-year civil war that has ravaged large parts of Somalia, displaced hundreds of thousands of people, and made it ever more difficult to reach the few places where food aid and health care is available.

“MSF has been working continuously in Somalia for over two decades running large-scale medical programs,” says Joe Belliveau, MSF operational manager. “We have managed to maintain our programs under Al Shabaab, but restrictions on supplies and international support staff have prevented us from scaling up further. We hope that the Al Shabaab statement leads to a lifting of these restrictions.”

MSF teams already present in various locations inside Somalia are extended nearly to their limits, while others are assisting exhausted refugees crossing Somalia’s borders into Ethiopia and Kenya.

“Most of our therapeutic feeding programs in Somalia are running over capacity, with more than 3,400 children currently enrolled in our nutritional programs,” adds Belliveau. “We are running emergency nutritional projects in several locations in the Lower Juba valley region, in Galgaduud, Mudug, Lower Shabelle, and Bay regions. [During] the past weeks we’ve seen a sharp rise in cases with some people traveling hundreds of kilometers to get access to health care and treatment for their malnourished children.”

For example: ‘Ader Mohammud, 19, travelled around 250 kilometers [150 miles] to bring her weakened 11-month-old daughter, Najmo, to MSF’s treatment center in Galcaayo. The long journey was almost too late and too long for the baby girl. “I could not afford the transport cost [approximately $8]," her mother says. "I have no support in Galcayo; I survive only with what other patients and caretakers give me.” Though her daughter is getting treatment at the moment, ‘Ader does not know how she will get home; she thinks she may have no choice but to sell the food rations she’ll get upon departure to pay for transport.

The situation is equally dire elsewhere in Somalia. “In the town of Marere [in southern Somalia] we noted a sharp increase in cases of severe malnourishment amongst people coming from all over the Juba valley,” says Belliveau. “The majority of the hospital beds in Marere are currently occupied by malnourished children in need of intensive care, and additional staff has been recruited to assist.”

Meanwhile, tens of thousands of Somalis have been fleeing to Kenya and Ethiopia in search of assistance. Waves of people continue to arrive every day at the sprawling Dadaab refugee camp in eastern Kenya. With the camps already badly overcrowded—originally built to hold 90,000 people, they now house four times that number—many are forced to seek shelter in the surrounding desert. In an assessment on the outskirts of one of Dadaab’s camp sites, MSF teams found extremely high malnutrition rates among new arrivals. There was a 37.7 percent rate of global acute malnutrition (GAM) and a 17.5 percent rate of severe acute malnutrition (SAM) among those surveyed. And 43.3 percent of children aged five to 10 were malnourished. As a consequence, MSF admitted 320 children in their Inpatient Therapeutic Feeding Center in June alone—three times as many as in the same month last year.

In addition, MSF is very concerned about delays in provision of assistance to the newly-arrived refugees. Since June 30, refugees received food for 15 days upon their arrival, but then told to wait as long as 40 days for the second food ration. “Families arriving in Dadaab are seeking a safe haven, and it is unacceptable that they should be made to wait this long to receive even the most basic form of assistance, food and water,” says Emilie Castaigner, the MSF’s Acting Head of Mission in Kenya.

In Dolo Ado, in southeastern Ethiopia’s Liben zone, in Somali Regional State, around 1,400 refugees cross the border every day—2,700 on June 28 alone. Dolo Ado already hosts almost 100,000 refugees in camps originally designed for 45,000 people. MSF screened children under 5 years old upon their arrival and found that 37 percent were malnourished. MSF is currently treating more than 6,800 children in these nutritional programs.

“MSF is increasing its capacity [in these camps] but the operational limits are being reached”, explained Alfonso Verdú, head of MSF operations in Ethiopia. "The engagement of other organizations to the nutritional crisis is essential while the present ones should uphold their responsibilities to avoid the deaths of many vulnerable people.”

MSF has worked continuously in Somalia since 1991 and currently provides free medical care in eight regions of southern Somalia. Over 1,300 Somali staff, supported by approximately 100 staff in Nairobi, provide free primary healthcare, malnutrition treatment, support to displaced people, surgery, water and relief supply distributions. MSF does not accept any government funding for its projects in Somalia, all its funding comes from private donors.