Somalia: The Neutrality of Medical Facilities Must be Respected

After its clinic in Hawa Abdi was occupied by an armed party, MSF is calling for all parties to respect the neutrality of medical facilities. 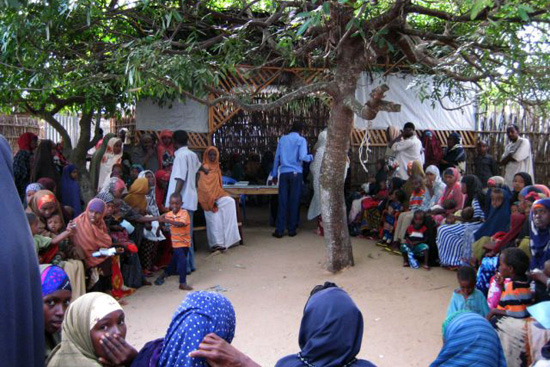 A malnutrition feeding program in Hawa Abdi in 2008.

On May 5, 2010, a private dispute escalated into a violent clash in the area surrounding the clinic Doctors Without Borders/Médecins Sans Frontières (MSF) manages in Hawa Abdi, in Somalia. An armed group that was involved later occupied the clinic itself and currently remains on the premises. MSF had to evacuate its patients and suspend its activities, leaving thousands of Somalis living in the Afgooye corridor without access to health care. A number of MSF non-medical staff are still being detained as well.

“We have been able to work in Somalia for the last 19 years because we do not take sides in any conflict,” explains Head of Mission David Querol. “We are committed to assisting the Somali people, but can only do so if the medical structures where we work and our staff are respected.”

MSF is deeply saddened to confirm the loss of two lives during this incident, including one of its employees, a clinic guard.

The organization urgently calls for the release of its employees. The neutrality of medical facilities and staff must be respected, and the Hawa Abdi compound must be vacated immediately so that life-saving medical activities can resume.

MSF has worked in the Afgooye corridor since 2007. In Hawa Abdi, MSF runs an outpatient department, a pediatric inpatient department, a cholera and diarrhea treatment center, a nutrition program, and programs that involve water trucking and the distribution of blankets and other non-food items. In Afgooye, MSF runs an outpatient department as well as an ambulatory feeding program, and supports the activities of the hospital by providing drugs and medical materials and by paying staff incentives. In 2009, more than 162,000 people received consultations and free medication in these facilities. More than 14,000 malnourished children were treated and over 31,000 children were vaccinated against measles.