Located in the bone-dry central Somalia, the city of Galkayo is divided in half by warring militias and separatist regional governments that continuously clash in armed confrontations. Since MSF was forced to evacuate its international staff in 2008 due to insecurity, MSF’s Somali staff has carried on the work of providing medical care to people trapped in a conflict with nowhere else to turn. 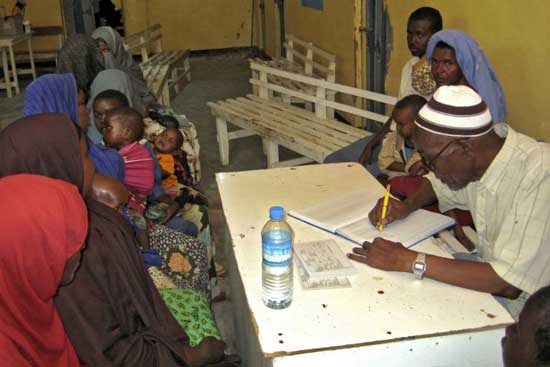 Despite the forced evacuation of international staff in early 2008, MSF services in the war-torn city of Galkayo has continued, thanks to hard work by the Somali medical staff.

Located in bone-dry central Somalia, the city of Galkayo is divided in half by warring militias and separatist regional governments that continuously clash in armed confrontations. Since Doctors Without Borders/Medecins Sans Frontieres (MSF) was forced to evacuate its international staff in 2008 due to insecurity, MSF’s Somali staff has carried on the work of providing medical care to people trapped in a conflict with nowhere else to turn.

Quickly changing into his green gown, Dr. Maslah hurried to the operating theatre in South Galkayo hospital to perform an emergency operation on a young man who has been stabbed. "The call came at 8 p.m.," he said. "By 10 p.m. we were in theatre and by 11 p.m. we had managed to stabilize the patient."

The following morning, relatives of the patient gathered in the hospital chatting, and sometimes even laughing loudly, as they receive news that the young man is going to be fine. They reassure friends and other relatives who arrive, having rushed to the hospital fearing the worst.

As one of the 144 Somali staff working for MSF in South Galkayo hospital, Dr. Maslah has played a crucial part in keeping the surgical activities running. In early 2008, at a time when the conflict in Somalia was intensifying and medical needs were increasing, MSF was forced to evacuate its international staff from the country. Since then, MSF’s projects have been run by Somali staff, supported and supervised by management teams based in Nairobi who visit whenever security allows. Without the work of Dr. Maslah and the hundreds of other Somali staff working for MSF throughout the war-torn country, thousands of people would have been left without free lifesaving medical care.

"Every month I’ll perform around 40 operations on people with abdominal injuries, gunshot and stab wounds, injuries of the colon, and people who’ve been in car accidents."

Nightime phone calls for urgent operations are a routine part of Dr. Maslah’s work, as South Galkayo hospital is the only one to provide free emergency surgery in the area. "Every month I’ll perform around 40 operations on people with abdominal injuries, gunshot and stab wounds, injuries of the colon, and people who’ve been in car accidents," says Dr. Maslah.

Surgery is just one of the services MSF provides in South Galkayo hospital, where some patients come from as far away as Ethiopia to receive care. MSF also operates an outpatient department, an inpatient department, a busy maternity ward and tuberculosis center. Every month MSF gives almost 4,000 outpatient consultations, admitting around 120 people for inpatient care and delivering more than 100 babies.

Prolonged drought, coupled with fighting and high food prices means the therapeutic feeding center is often packed to capacity. Pointing to a queue of frustrated women holding weak, dehydrated babies waiting to be admitted, nutritional supervisor Jibril explains: "Every month we admit several cases of diarrhea, measles, dehydration, and sometimes meningitis. But now severe acute malnutrition is becoming the most common problem. We are currently treating 90 patients in a space meant for only 60."

The exhaustion on the mothers’ faces reveals the long and costly journey that most have made to reach the hospital. As one mother says, "Many in the village know that there is free treatment here, but the biggest problem is the journey. It can take many days and is often very expensive, costing around 500,000 Somali shillings (about US$10). A lot of people can’t afford it, so they stay at home and some of them die in the village."

The burn marks on the bodies of a number of the young babies in the feeding center shows that many of the mothers first turned to traditional healers for treatment and only come to the hospital as a last resort.

In sharp contrast to the group is a woman with a big smile standing at the door of the feeding center. In one arm she carries a healthy baby and in the other she holds a bag containing the family food ration she has been given by MSF to take home. She raises her voice above the deafening noise of the crying children to thank one of the staff. "She has been here for quite some time and today she is returning home with a healthy baby," says Jibril.

MSF staff like Jibril and Dr. Maslah work around the clock at South Galkayo hospital with many other committed Somali staff to provide health care to a community in dire need. "The staff at this hospital save many lives," says Dr. Maslah.

South Galcayo hospital is one of the few centers in central/south Somalia that offers surgical care—lifesaving emergency obstetric care and treatment for the many people wounded by violence. During 2008, MSF staff treated 470 victims of violent trauma and provided 43,781 medical consultations, including the treatment of more than 3,000 severely malnourished children. They delivered 936 babies and vaccinated 17,650 people. In addition, 269 patients were started on treatment for tuberculosis. The team also has the capacity to respond to outbreaks such as cholera, measles, meningitis, and nutritional crises.