South Africa: One Month Later, Displaced Left Out in the Cold 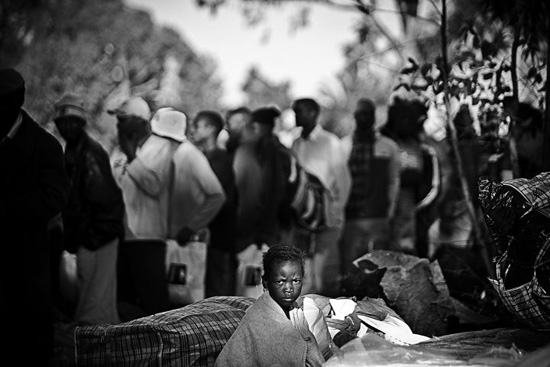 A child waits by a line of foreign nationals seeking temporary shelter at a camp near Germiston suburb in Johannesburg.

One month ago, violence against foreign nationals in South Africa erupted in parts of Gauteng, Western Cape, and Kwa-Zulu Natal Province, leading to the displacement of more than 80,000 people across the country, according to the United Nations High Commissioner for Refugees (UNHCR).

Initially, tens of thousands of people fled to police stations, community halls, churches, and mosques to seek shelter and safety. For three weeks, they lived in poor conditions and relied primarily on a patchwork of assistance from private individuals and organizations. 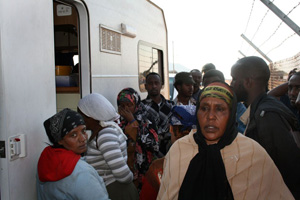 In Johannesburg, South African authorities erected temporary camps in different areas of the city, but the camps were not properly prepared to host the displaced, and provided little guarantee of security and protection. Since June 1, Doctors Without Borders/Médecins Sans Frontières (MSF) teams have been working to fill gaps in assistance in seven camps—six in Johannesburg and one in Pretoria.

“The situation in the camps is very precarious,” says Philippe Havet, who coordinates MSF's emergency intervention. “Hygiene and sanitation conditions are still inadequate, temperatures are plummeting at night, and the tents are not meant for this kind of weather. Almost half of our medical consultations are for respiratory diseases, which can be linked to the cold. In addition, our patients continuously express anxiety about their safety and security.”

In the immediate aftermath of the violence, MSF teams in both Johannesburg and Cape Town provided emergency medical assistance, treating mainly violence-related injuries, particularly in Johannesburg where the level of violence was extreme. In the subsequent weeks, mobile medical and logistical teams provided health care, blankets, plastic sheeting, and hygiene kits in 15 of the 20 sites in Johannesburg and in seven sites in Khayelitsha, Cape Town. 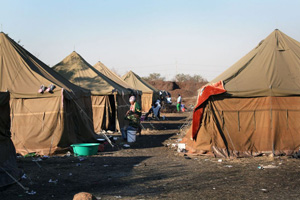 In Johannesburg, many displaced people are living in temporary camps with inadequate hygiene, shelter, and safety.

Today, three teams in Johannesburg rotate between camps to make sure primary care is available to those in need. In one month, more than 4,000 consultations have been carried out. In Khayelitsha, one mobile medical team supports the city and provincial departments of health in providing primary health care and referrals for the displaced.

“MSF is not here to substitute the responsibility of the government, but rather to fill any gaps that may exist,” says Havet. “People are very afraid, and many distrust the aid coming through South African authorities. This makes MSF's intervention as an independent organization critical.”

The events that displaced people have endured in recent weeks have caused serious mental trauma. Many of those affected by the violence came to South Africa in the first place because they were fleeing political unrest in their home countries. In Johannesburg, where the violence was most extreme, MSF has incorporated mental health activities into the work of the medical teams, organizing both individual and group counselling.

“Many of our patients, including Zimbabweans and Congolese, have been re-traumatized by the violence and displacement in South Africa”' says MSF nurse Bianca Tolboom. “In addition to living in harsh conditions, they are living in fear, and their main concern is what to do next. Will they go back to their homes in South Africa where they may be attacked again? Will they go back to the countries they fled in the first place? It is an impossible choice, and for the moment, they are literally left in the cold.”

MSF has been present in South Africa since 1999, providing comprehensive HIV and TB care and treatment in Khayelitsha, Cape Town, and Lusikisiki, in Eastern Cape Province. Since December 2007 MSF has also been working in central Johannesburg and in Musina, at the Zimbabwean border, to provide Zimbabweans seeking refuge in South Africa with access to medical care. Following the recent violence and unrest, MSF has been providing assistance to the affected population in Johannesburg, Cape Town, and Pretoria.