An estimated 100,000 people are in urgent need of lifesaving medical care as violence continues in South Sudan’s Jonglei state. 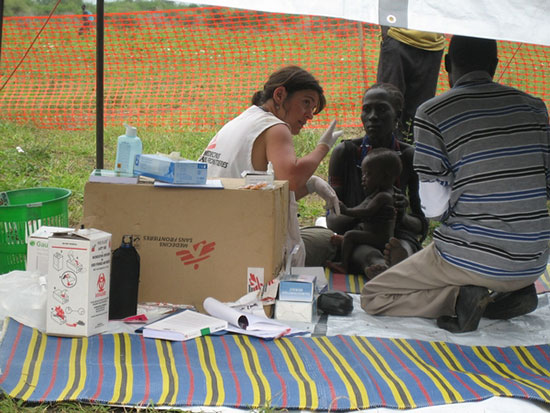 An MSF doctor examines a child at a makeshift clinic in Pibor County.

This massive population displacement, which began in May and escalated in July, stems from intercommunal clashes and a violent conflict between the South Sudan Army (SPLA) and the David Yau Yau armed militia group. While MSF is treating hundreds of people for conditions related to the violence and displacement, the aid response in Jonglei State is far from meeting the emergency needs.

A child, estimated to be three to four years old, was brought to the MSF clinic in Gumuruk by his mother.

“The boy fled with his father from our village to the south of Gumuruk,” recalls Katrin Kisswani. “They were chased by armed men and finally the father was shot dead. The men reached the father and the child and began to beat them. They threw the child into the river and tried to drown him.”

During the consultations the child fell in and out of consciousness and was crying out for his father. He was treated for malaria and fever; the medics gave him antibiotics and he will be coming back for a follow up visit after few days.

“Since Sunday, July 21, MSF mobile clinics have performed more than 700 consultations in the bush in southern Pibor, treating mostly respiratory tract infections, malaria, and general health concerns resulting from hiding in such conditions for so long,” said MSF emergency coordinator Katrin Kisswani. “Many of our patients tell us they are still too afraid to return to [their] towns despite conditions deteriorating in the bush due to the ongoing rainy season.”

Over the past few days more than 25,000 people have arrived in Gumuruk village, leaving their hiding places in the bush to seek assistance. To date, aid agencies have been unable to cover their most basic needs. An MSF clinic in Gumuruk is currently the only health care structure functioning in Pibor County after MSF's hospital in Pibor town was targeted and destroyed in May.

A three-year-old boy arrived at the MSF clinic in Gumuruk with several gunshot wounds in his buttocks, shoulder, and lower leg.

His family escaped into the bush to flee armed men. His parents were both shot dead and he was subsequently taken care of by three different family groups in the bush until he was finally brought to the MSF clinic in Gumuruk.

He presented with wounds that were seven to ten days old. He was stable, and able to walk, but his wounds required surgery. His injuries have been dressed and he has received antibiotics, and now awaits the MSF surgical team that will arrive in the next few days.

"They arrive in Gumuruk with almost nothing," said MSF emergency coordinator Katrin Kisswani. "Right now we are treating about 100 patients a day [in Gumuruk] and we expect this to increase. Since July 19, a few – almost all women and children – have arrived with wounds that are clearly many days old." Some patients also show signs of mental trauma.

MSF is operating mobile clinics in areas where people are hiding in southern Pibor. Since July 21, these clinics have performed more than 700 medical consultations, treating respiratory tract infections, malaria and other conditions related to the population's displacement.

"Many of our patients tell us they are still too afraid to return to towns despite conditions deteriorating in the bush due to the ongoing rainy season," Kisswani said.

In the days immediately following the latest intercommunal clashes, MSF also received 248 patients in the hospital of the state capital, Bor, including 129 wounded. Three others wounded elsewhere were referred to an MSF hospital in Leer, in nearby Unity State. Since July 16, as the cycle of violence moved north, MSF has received 21 wounded patients in its hospital in Lankien, eight of whom were referred onward to either Leer or Bor.

MSF is extremely concerned for the thousands of people still hiding in the bush with limited access to health care, and for those arriving in Gumuruk. MSF urges all parties to respect and facilitate the deployment of humanitarian aid to those in need across Jonglei State.

A 60-year-old woman arrived at the MSF mobile clinic in Dorein, in the bush, exhausted after walking for 11 days to get there from Lekwongole.

She fled from attackers in Lekwongole, who stole her cattle and chased her and her adult sons away. They headed first to Manyabol, where they had to flee again from armed men. Finally they reached Dorein.

Her feet were painful and swollen, but she will recover after some rest.

MSF has been working in Jonglei state since 1993. MSF provides primary and secondary health care through its health centers in Pibor, Uror, and Nyirol counties, as well as emergency medical care when required in response to outbreaks of violence. In 2012, MSF provided 130,692 outpatient consultations in Jonglei state.