South Sudan: Providing Health Care to a Displaced Population of Over 100,000

View Photo Rogier Jaarsma
Médecins Sans Frontières (MSF) runs health care facilities in the UN protection of civilians camp (PoC) in Bentiu, South Sudan. The MSF hospital in the Bentiu PoC is the only hospital for the population of the camp. It provides 24-hour emergency room care, intensive care for malnourished children, medical treatment in paediatric and adult wards, and surgical and maternity services. More than 100,000 people live in dire living conditions in the Bentiu PoC, having fled ongoing violence.
Rogier Jaarsma
Click to hide Text

At the end of 2013, when fighting broke out in the capital of South Sudan and rapidly spread throughout the country, Doctors Without Borders/Médecins Sans Frontières (MSF) dispatched teams along with medical supplies to critically affected locations. The number of projects run by MSF quickly increased; today MSF has 17 projects across nine of South Sudan's 10 states.

Throughout the conflict, in the Sudd in the north of the country—a vast swamp area and one of the world’s largest wetlands—thousands of civilians have been forced to flee into surrounding bush and swamplands. Others fled to the United Nations (UN) Protection of Civilians (PoC) site in the remote town of Bentiu. In May, 2016, the population of the camp reached almost 125,000; there was an influx of more arrivals in July, after fighting broke out again. Today, almost 600,000 people are displaced in this part of South Sudan.

The increase of the population has put enormous strain on existing medical and humanitarian resources. At the beginning of 2016, MSF began to significantly scale up its medical operations, opening a new emergency room and pediatric wards for malnutrition and other illnesses. The medical team hired and trained more than 120 community health workers to monitor the health status of the population. Five days per week they conduct outreach activities in the camp: meeting with the population; identifying people in need; and referring them to the hospital when needed.

To reflect the growth of the camp, MSF also expanded the bed capacity of its hospital to 180 (up from 60). It is the only hospital that provides secondary health care to the population of the camp. Services include a 24-hour emergency room, surgery, and an inpatient department. The medical team also provides maternity, obstetrics and neonatal care, and services to victims of sexual violence. There is also an inpatient therapeutic feeding center that provides treatment to malnourished children.

As a result of other concurrent outbreaks of infectious diseases, MSF also operates two isolation wards for patients with suspected hepatitis E and measles. The medical team also started testing suspected tuberculosis cases. MSF operations in Bentiu are supported by more than 470 staff.

A New Clinic in Bentiu Town 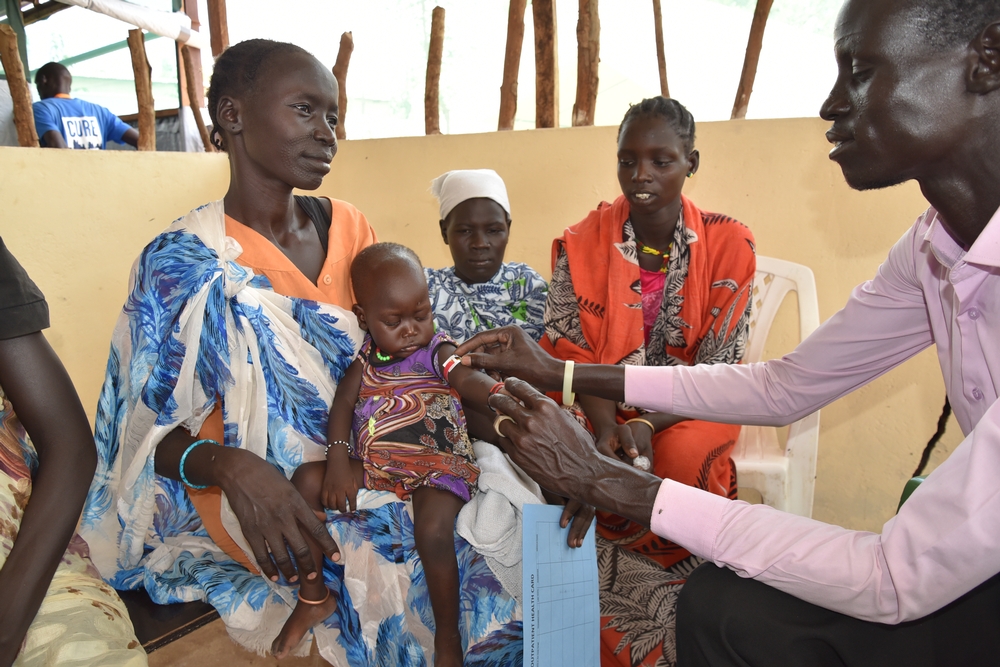 In May, 2016, MSF opened a new clinic in the center of Bentiu, a few kilometers away from the PoC camp. The clinic addresses the needs of the communities in Bentiu, and the displaced population, who don’t otherwise have access to health care. Six days per week MSF teams provide primary healthcare, stabilize patients when needed, and refer them to secondary health care hospitals.

Every day, more than 100 patients arrive at the clinic, most of them are children. Three-year-old Waar, was brought in to the clinic by his mother, Nyawitch, as he was quite sick. At the clinic, MSF medical staff screen children like Waar for malnutrition by using a Mid-Upper Arm Circumference (MUAC) bracelet. 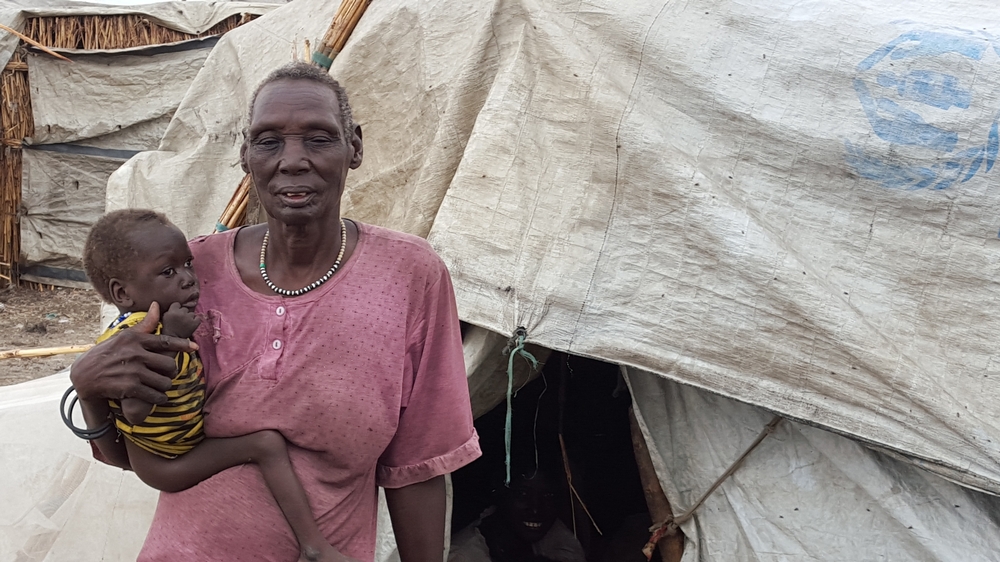 Grandma Nantiek arrived at the PoC in June 2015 with her family of 12. They fled their home in Leer—a small town approximately 74 miles south of Bentiu—leaving everything behind. “Our house was looted, our cattle were looted, we had to flee, and we couldn’t stay. We left everything behind us,” said Nantiek, repeating a story that is all too common among families here. “We were hungry also,” she added. “Here, at least they won’t kill us, they give us some food and some water, a shelter, and we can go to the health center or to the MSF hospital when we are sick.”

Nantiek's youngest granddaughter is severely disabled. The camp is full of children playing in the mud, in temperatures that can reach 118 degrees Fahrenheit, even under cover. But the rainy season will soon come, bringing with it outbreaks of malaria and putting the lives of children, including Nantiek's granddaughter, at risk.

The camp is divided into several blocks that are equipped with latrines and water points, but each person is allocated just over two gallons of water per day—almost half the recommended amount. A family of five receives a 110-pound bag of sorghum flour, some oil and a few cups of lentils every month—hardly enough to survive. The MSF hospital in the camp frequently treats children for severe acute malnutrition.

Nantiek and her family fled to the camp to find safety and stability, but on more than one occasion they have been forced to relocate to other sections of the camp without the guarantee of shelter. "We moved already, and now they want us to move again but they don’t give us a place; a shelter. I’m too tired to move,” said Nantiek.

Despite all she has lost, Nantiek still wishes her and her family could return home, “I want to return to my village, my cows, my crops—but we lost everything. We are not well here, but we need security.”

In the meantime Nantiek has little choice but to remain within the confines of the camp with her family.

Médecins Sans Frontières (MSF) runs health care facilities in the UN protection of civilians camp (PoC) in Bentiu, South Sudan. The MSF hospital in the Bentiu PoC is the only hospital for the population of the camp. It provides 24-hour emergency room care, intensive care for malnourished children, medical treatment in paediatric and adult wards, and surgical and maternity services. More than 100,000 people live in dire living conditions in the Bentiu PoC, having fled ongoing violence.
Rogier Jaarsma