MSF is providing medical assistance to refugees who left Sudan and have been living in two towns in South Sudan since the country gained independence last July. 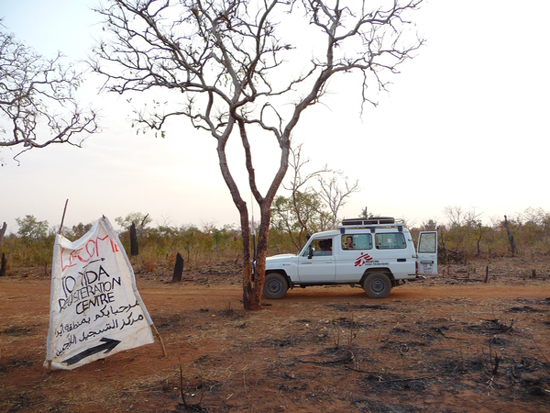 The entrance to the MSF camp at Yida.

Doctors Without Borders/Médecins Sans Frontières (MSF) is providing medical assistance to refugees and repatriated persons who left Sudan and have been living in two towns in South Sudan since the country gained independence last July.

For the past several months, families fleeing aerial bombings in the Sudanese region of South Kordofan have been seeking sanctuary in a refugee camp in Yida, a large border village in South Sudan. Approximately 30,000 refugees are registered, but the precise number of people who’ve arrived is not known. People continue to come to the camp because the border between Sudan and South Sudan is open. However, some refugees periodically return to their home region, the Nuba mountains of South Kordofan, in search of food.

Others have found refuge in the town of Renk, in neighboring Upper Nile state. These are native South Sudanese people who had lived in northern Sudan but had to leave after South Sudan gained independence. Like most of these repatriated persons, they are staying in Renk, settled, for the time being, in transit camps.

Medical care in Yida and Renk is limited. South Sudan is a new country with little infrastructure and few hospitals or health centers. In November, MSF set up a 15-bed hospital unit in Yida. "We are caring primarily for children," says Dr. Michel Rasolorinira, MSF's project coordinator in Yida. "We are seeing lots of cases of diarrhea and respiratory infections and some children with serious malaria and malnutrition." An average of four patients are admitted per day.

The camp also has a clinic that had been operating on an irregular schedule. To ensure regular access to health care, MSF took over the clinic in mid-January. Now, approximately 700 patients seek care each week. Thirty percent of the patients are children under five years of age.

MSF is also providing support at the Renk hospital, helping to improve the treatment of pediatric and obstetrical patients, and is running a clinic in the Renk transit camp.

In both Renk and Yida, MSF’s services are also available to the local populations.