Tens of thousands of refugees who have fled fighting in Sudan to seek safety in neighboring South Sudan are in desperate need of humanitarian assistance. 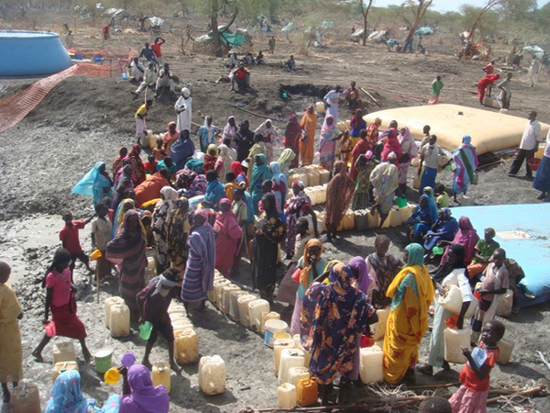 A new influx of 30,000 refugees crossed the border from Sudan's Blue Nile State into South Sudan's Upper Nile State over a period of about 2 weeks, joining the 70,000 refugees who are already hosted in overcrowded refugee camps.

JUBA/BRUSSELS/NEW YORK, JUNE 4, 2012—Tens of thousands of refugees who have fled fighting in Sudan to seek safety in neighboring South Sudan are in desperate need of humanitarian assistance, with many people taking shelter under trees and suffering from a dire lack of water, the international medical humanitarian organization Doctors Without Borders/Médecins Sans Frontières (MSF) said today.

Up to 30,000 people recently crossed the from Sudan’s Blue Nile State into South Sudan’s Upper Nile State, after an arduous weeks-long journey that many people reportedly did not survive. They joined 70,000 refugees who have also fled fighting between the Sudanese Armed Forces and the SPLM-North armed group. The refugees are living in camps with alarmingly insufficient basic services, especially water supplies. MSF calls on the United Nations High Commission for Refugees (UNHCR) to immediately identify a suitable place of refuge.

“We have a real emergency on our hands,” said MSF’s emergency coordinator Patrick Swartenbroekx. “We are providing medical care and treating and distributing 90,000 liters of water a day at a temporary gathering point. But the ponds here will be empty at the end of this week—after that the situation becomes critical.”

Since November, water shortages have plagued the humanitarian response in two refugee camps in a remote and barren part of Upper Nile State. Doro camp is almost full to capacity and in Jamam camp people have access to less than seven liters [about two gallons] of water per day, less than half the minimum standard required in emergencies. Nearly 40 percent of consultations in MSF’s clinic in Jamam are for diarrhea.

A long-planned third refugee camp at Yusuf Batil is being prepared, but currently only provides enough water for three to four thousand people. With the existing camps either full or with insufficient water, there is an extremely pressing need for alternative accommodation and assistance solutions, MSF said.

For now, the newly arrived refugees are gathered under trees at a place called Rum. Only a few people have scraps of plastic sheeting for shelter. Since last week MSF has provided medical care for the most serious cases, including 214 consultations for diarrhea and 34 for children with acute malnutrition.

The refugees are exhausted and have spent months in the bush hiding from fighting. Many tell harrowing stories of the weak or injured falling by the wayside during the long walk, which took a minimum of two weeks, and for many, substantially longer.

“We walked with the whole family for more than 17 days with very little water or food,” said a father surrounded by his children. “There are still many people on the road including a lot of older and weaker people. Many people are sick with diarrhea.”

“A nightmare scenario is beginning to unfold,” said Jean-Marc Jacobs, MSF deputy head of mission. “For more than three months MSF has warned about the need to provide more water and to be prepared for further influxes of refugees. Now we have a situation that requires immediate and effective action from all organizations today.”

MSF will provide medical care for the new refugees, and will provide emergency water provision for the few days left before the ponds at Rum are empty. At the same time however, UNHCR and the other humanitarian organizations in Maban county must explore every avenue to find a suitable place for the refugees.

The priority activities should be:

Since November 2011, MSF has been running a substantial emergency medical operation for the refugees in Upper Nile State. The team now counts more than 40 international staff and 250 local staff on the ground running two field hospitals and providing more than 3,000 consultations a week. The team also runs mobile clinics to the border crossing points and undertakes water treatment and distribution as an emergency life-saving measure.