South Sudan: Thousands of Civilians Flee for Their Lives

Renewed intercommunal violence in Jonglei State, South Sudan, has forced thousands of families to flee into the bush, where they have no access to assistance, including medical care. 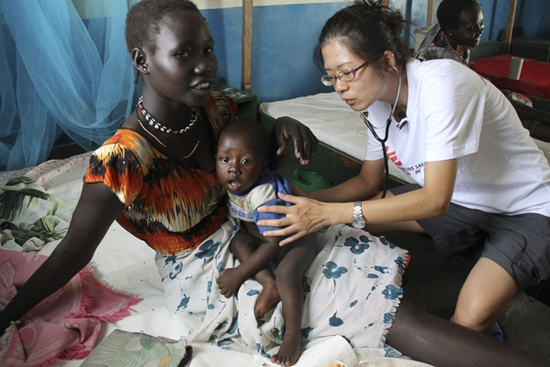 An MSF staff member attends to a patient at a hospital in Pibor County, which was looted and damaged during intercommunal violence this week.

Juba, South Sudan/Brussels/New York, January 3, 2012—Renewed intercommunal violence in Jonglei State, South Sudan, has forced thousands of families to flee into the bush, where they have no access to assistance, including medical care.

“Thousands of people in Lekwongole and Pibor fled in the last week and are now hiding in the bush, frightened for their lives,” said Parthesarathy Rajendran, MSF head of mission in South Sudan. “They fled in haste and have no food or water, some of them doubtless with wounds. Now they are hiding on their own, beyond the reach of humanitarian assistance.”

The village of Lekwongole was razed to the ground and an MSF team that assessed the situation in Pibor on December 28 described it as a ghost town. Virtually everyone fled into the surrounding countryside. While people are hidden in the bush, they cannot be reached, meaning they cannot have wounds cleaned and dressed, be treated for diseases, or access general healthcare.

MSF condemned the targeting of neutral and impartial medical facilities. The organization has provided neutral medical aid in South Sudan for the last three decades, working in many different communities in the country and treating anyone requiring medical care, irrespective of their ethnicity, religion, or political affiliation. These most recent attacks follow the August 2011 looting and burning of MSF medical facilities in Pieri, further north in Jonglei State. MSF subsequently treated 157 wounded people, mostly women and children.

Ten MSF international staff members were relocated to Juba on December 23, just before the latest violence erupted, and 156 locally hired staff were strongly advised to leave their town or village and seek refuge in the area. Although MSF has established contact with a few of them, many cannot be reached after taking flight along with their families and neighbors. Their precise whereabouts are unknown and MSF is deeply concerned about their safety.

MSF is ready to return and recommence providing emergency care as soon as possible.

“There are several crisis situations evolving in different parts of South Sudan right now,” said Rajendran. “Our medical teams are also currently responding to the crisis of refugees fleeing conflict in neighboring Sudan. These are staunch reminders that despite independence, acute emergencies are still all too present in South Sudan and the capacity for emergency humanitarian response remains an absolute priority.”

UPDATE: JANUARY 10, 2011
A 12-person MSF team returned to Pibor town on Saturday, January 7, following inter-communal violence, which included the looting and destruction of MSF facilities in Pibor. MSF is rehabilitating the facilities in order to resume medical activities. More than one ton of supplies, including drugs and logistics materials, have been airlifted to Pibor town.
As of January 10, 60 of the 155 locally hired MSF staff in Pibor county remain unaccounted for.

MSF has been working in Sudan since 1978 and began activities in the area that is now South Sudan in 1983. MSF works in 8 of 10 states in South Sudan today, providing healthcare in 15 projects via roughly 2,500 national staff and 200 international staff.

MSF and MSF-supported clinics serve a variety of communities, are free of charge, and are open to all. In 2010 MSF teams across the country carried out 588,000 outpatient consultations, treated 37,000 people with malaria, delivered 20,000 babies, cared for 18,000 hospitalized patients, and cured almost 26,000 malnourished children under 5 years of age.