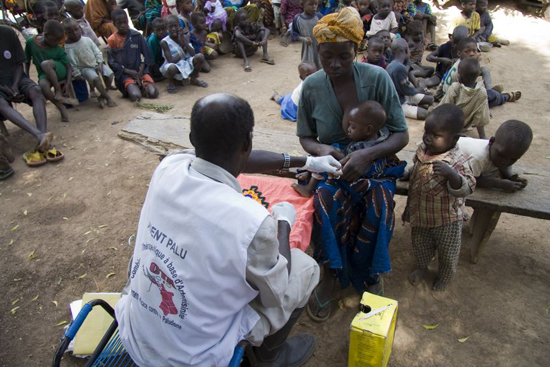 A community health worker, trained and supplied by MSF, screens children for malaria in Kangaba district.

The south of Mali, a marshy region crossed from west to east by the river Niger, is a breeding ground for the mosquitoes that carry malaria. The disease is omnipresent here, and children, the group most vulnerable to the parasite, are its main victims. Every child under five suffers from malaria at least once a year, and some catch it a second or even a third time over the course of a year. The medical needs associated with malaria are huge, but the health system does not respond proportionately.

“During every rainy season, the children in my village would drop like flies, struck down by malaria,” says the Imam of Kalakoro, a village in the Kangaba district. “I had to bury them two at a time, there were so many deaths.”

In 2005, Doctors Without Borders/Médecins Sans Frontières (MSF) launched a project to fight malaria in the Kangaba district. After identifying barriers to accessing health care-mainly cost and distance-MSF implemented new treatment and cost strategies for the seven health centers it supports. The results were encouraging: a four-fold increase in the number of people receiving consultations; a significant reduction in malaria-related mortality and overall mortality; and a reduced number of malaria cases that became severe.

In a region where the majority of the population lives on less than a dollar a day, it is difficult for the sick to access a health system in which services must be paid for. MSF introduced new pricing practices, including free care for all children under five and pregnant women, the most vulnerable populations. Patients over five years of age now pay a fixed price of about 50 cents-where previous charges had ranged from about five to 14 dollars-for complete treatment of febrile illnesses, which are the majority of the diseases encountered in this region. The loss of income for health centers is covered entirely by MSF so as to integrate the measure into the existing health system. Most cases of malaria can now be tackled at an early stage in order to prevent the appearance of severe forms that often end in death.

“I used to have four patients a day in my health centre during the high-transmission period,” says the head of one of the centers supervised by MSF. “Today, the team at the center has to deal with 20 or 30 consultations on a daily basis. At last, we have the moral satisfaction of meeting the needs of our population.”

During the rainy season-which corresponds with the high-transmission period for malaria-many villages are isolated by marshes, leaving people unable to reach health centers. To overcome the distance problem, MSF set up mobile teams. During the six-month rainy season, the community health workers, or “malaria agents,” go off to isolated villages. These farmers and family men are trained and equipped by MSF to provide free screening and treatment for simple malaria cases in children younger than ten years of age.

Today, the population of Kangaba finally has access to quality healthcare. People can see a doctor without becoming even poorer; they can receive effective treatment; and, in the case of populations who are isolated during the rainy season, they can obtain free care at home.