MSF provides care to hundreds of thousands of people in six states in Southern Sudan. In recent months, increasing violence and insecurity caused mostly by fighting between different tribes, as well as heightened tensions around disarmament initiatives, criminality in the regional capital, Juba, and road banditry has made it more difficult for MSF field teams to reach people in need of aid. 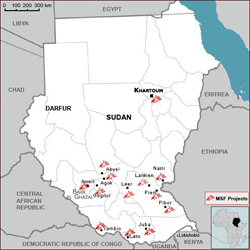 Doctors Without Borders/Médecins Sans Frontières (MSF) provides care to hundreds of thousands of people in six states in Southern Sudan. In recent months, increasing violence and insecurity caused mostly by fighting between different tribes, as well as heightened tensions around disarmament initiatives, criminality in the regional capital, Juba, and road banditry has made it more difficult for MSF field teams to reach people in need of aid.

"Their homes have been burned, along with their food stock. The people who managed to flee have nothing with them—they ran for their lives so they couldn’t bring any clothes or cooking pots."

In early 2009, there was a sharp increase in inter-tribal violence in Jonglei, Upper Nile, Lakes, and Warrap states resulting in hundreds of deaths and the displacement of thousands of people.

In May, an attack on the village of Torkej in Upper Nile State, bordering Jonglei State, resulted in many wounded arriving in nearby Nasir, where MSF runs a hospital providing basic and secondary health care, including inpatient facilities and treatment for malnutrition, maternal health, tuberculosis care, and kala azar, as well as surgical care. A total of 57 victims made it to the hospital. Many patients suffered multiple gunshot wounds and needed follow-up surgery and care. The majority were women and children. Several thousand civilians have been displaced by the ongoing clashes, with around 2,000 people fleeing to the outskirts of Nasir and Jigmir.

Two other brutal clashes occurred in March and April 2009 in Pibor and Akobo counties in Jonglei State. Upwards of 15,000 people fleeing the violence arrived in Akobo, south of Nasir, near to the Ethiopian border. In response, MSF sent a team to assist staff at Akobo hospital. Some 36 wounded patients were treated, mainly for gunshot injuries. Eight patients were flown to Leer Hospital in Unity State, run by MSF, for further surgery. MSF also provided the hospital in Akobo with medical supplies, mosquito nets, and food and blankets for the wounded and their caretakers.

“Nearly all the patients tell us they lost family members in the violence. We heard horrific stories—women and children were attacked and killed in their homes, and children were also kidnapped,” says Dr. Jonathan Novoa, MSF medical coordinator in Akobo County.

“Many patients had multiple gunshot wounds—a 10-year-old boy had three bullet wounds to both his legs. One mother we treated had lost five children and her husband. She managed to escape with only her smallest baby who had been shot in the arm; both survived and made it to the hospital. The wounded and their families are suffering from the trauma of the attacks. Their homes have been burned, along with their food stock. The people who managed to flee have nothing with them—they ran for their lives so they couldn’t bring any clothes or cooking pots. They sleep outside.”

On the other side of Jonglei State, following attacks in Lekwongole, Pibor County, in early March, another MSF team evacuated injured people to Pibor hospital. More than 40 patients were treated for violent trauma wounds resulting from gunshots. The 22 most seriously injured were flown to hospitals in Juba and Boma for urgent surgery.

Dr. Catherine Van Overloop, Medical Coordinator for MSF in Pibor Country explains, "Even up to ten days after the attacks on Lekwongole, wounded people were still arriving in our clinic. They had been hiding in the bush, too afraid to move. Fearing more attacks they didn’t dare seek the medical treatment they urgently needed, so they reached us when their wounds were even more infected. The people are so fearful here. For days after the attacks, the women in Pibor were too afraid to ever leave their children alone, in case there was another sudden clash and the children were killed or taken. They brought them absolutely everywhere with them, even to work, carrying them on their backs, afraid they might have to suddenly flee."

Villages on the border with Congo attacked

Towards the end of 2008, attacks by the Ugandan rebel group, the Lord’s Resistance Army (LRA), near the Congolese border and also in Democratic Republic of the Congo (DRC) itself, caused thousands of Sudanese people to flee their homes and Congolese refugees to cross the border and seek refuge in Sudan. In response, MSF started supporting two primary healthcare clinics in Gangura and Sakura, in Western Equatoria State, close to the border with DRC. By the end of 2008, 7,200 medical consultations had been provided to both the resident and refugee populations in these two areas.

In February, MSF teams in neighboring Central Equatorial State also began assisting Congolese refugees in Lasu, approximately 50 km (30 miles) from the Congolese border. Initially, MSF assisted in two temporary camps in Libogo and Nyori where more than 6,000 people had sought refuge. In both locations, the majority of refugees arrived from DRC without any of the essential basics needed for everyday life. MSF teams worked to provide shelter, repair boreholes and build showers and latrines in the camps.

The following month, when the UN High Commissioner for Refugees (UNHCR) created a camp in Nyori, MSF set up a health facility with inpatient capacity and a pharmacy. This facility provides general medical consultations, antenatal care, deliveries and treatment for malnutrition. In the first week, 500 consultations were provided. MSF teams also constructed 39 communal latrines for the camp and drilled two new boreholes. Health promoters were employed to raise awareness of diseases like tuberculosis, malaria, and water-borne diseases. MSF also vaccinated 1,638 children in the camp against measles.

Responding to Outbreaks and Epidemics

Large-scale outbreaks of meningitis, measles, cholera, and malaria are common in Sudan. In the early months of 2009, MSF teams responded to several outbreaks of cholera: in Peth, in Aweil East, northern Bahr-el-Ghazal State; Pibor, in Jonglei State; and Gogrial town, Warrap State. Where possible, MSF worked alongside the Ministry of Health, providing treatment, medical supplies, tents, and staff as necessary.

In Juba County, Central Equatoria State, where there are cholera outbreaks every year MSF has started preventive activities including health promotion and the provision of clean water in communities at risk, such as Kator and Munuki. In order to improve hygiene and reduce the number of deaths from water-borne diseases, MSF is providing clean water by repairing existing boreholes in the community and drilling new boreholes, including in four health centers.

In February, MSF responded to a meningitis outbreak in Kapoeta, Eastern Equatoria State, vaccinating 65,322 people and supporting health structures in treating people infected with the disease. MSF also coordinated with other agencies to respond to meningitis cases in northern Unity State.

Medical care at all levels

MSF’s activities continue in other parts of Sudan. An absence of healthcare staff, structures, roads, transport, other aid agencies, and investment in health care means that in some areas MSF is often the only medical organization present. In Aweil, Bahr-el-Ghazal State, MSF supports a hospital, focusing on providing healthcare to mothers and children and nutritional care. In the disputed areas of Abyei and nearby Agok, in Warrap State, MSF runs outpatient clinics and provides nutritional care in both fixed and mobile clinics. In 2008, 8,950 outpatient consultations were provided and over 1,200 severely malnourished children were treated. In 2009, MSF began a reproductive health program providing antenatal care and safe deliveries in the Abyei region.

In Pieri, Lankien, and Pibor, all in Jonglei State; Nasir, in Upper Nile State; and Leer, in Unity State, medical staff provide all levels of health care, ranging from consultations for respiratory tract infections to lifesaving surgery. In 2008, medical teams provided over 360,000 outpatient consultations, almost 20,000 antenatal consultations, 1,098 surgeries, many of them emergency surgical interventions for gunshot wounds, and admitted about 8,300 people as inpatients. Some 492 people were started on treatment for tuberculosis in 2008. Malaria is a growing concern. In 2007, 4,400 people were treated for malaria in Leer hospital. In 2008, this number rose to 25,500, and in the first four months of 2009 the MSF team had already treated 14,000 patients.