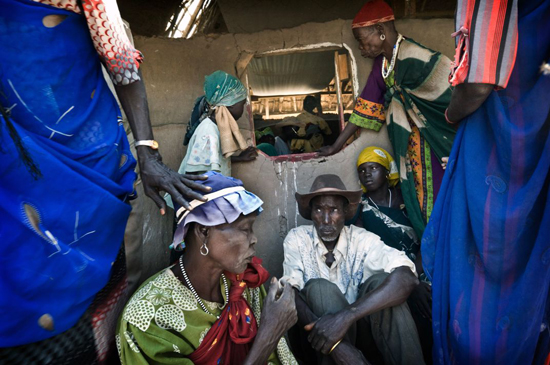 Patients wait in front of the pharmacy of an MSF clinic in Pieri, Jonglei State.

On Sunday, September 20, yet another violent clash broke out in Duk Patdiet, Jonglei State, in Southern Sudan. This is part of an escalating wave of violence in the region that has been ongoing since the beginning of the year.

To date, a total of 43 wounded people have arrived at the Doctors Without Borders/Médecins Sans Frontières (MSF) clinic in Pieri. Those who were fortunate were brought by family members on makeshift stretchers. Others came on foot, travelling for hours and, in some cases, days. The wounds ranged in severity from superficial skin wounds, to bone fractures and gunshots in the chest and abdomen.

MSF also assisted in the evacuation of 10 children from the site of the clash to receive medical attention in the Juba teaching hospital run by the Ministry of Health.

Since the first patients arrived at the clinic in Pieri, the MSF team of doctors, nurses, and logisticians have worked around the clock, assessing and treating emergency cases, organizing extra bed capacity, ensuring generators run day and night to power the clinic, and finding blood donors for those with the most severe injuries.

So far, 11 patients have been airlifted for surgical interventions to MSF hospitals in Nasir and Leer. In this dry and dusty environment there is a high risk of infection amongst the wounded, which makes follow-up care critical in the weeks to come.

"In the 38-degree (100 degrees Fahrenheit) heat, the working conditions for our teams are extreme, yet they continue to work tirelessly to provide each patient that enters our clinic with the best possible medical care," said Ross Duffy, MSF's head of mission.

The clash in Duk Patdiet is the most recent in a string of violent attacks this year. Since March, MSF teams have treated 343 wounded, mainly in Jonglei and Upper Nile states.

Official statistics report up to 140,000 people having been displaced across the region due to violence and insecurity. Attacks by the Lord's Resistance Army (LRA) in the Equatorial States have also reportedly forced 65,000 Sudanese from their homes this year, and resulted in the deaths and abductions of hundreds of others.