An interview with MSF head of mission Annemarie Loof 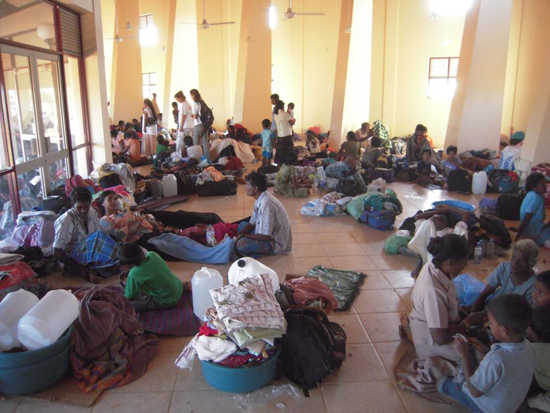 Displaced people rest at a camp near Vavuniya.

Since the beginning of the year, fighting between the Sri Lankan army and the Liberation Tigers of Tamil Eelam (LTTE) has intensified. There has been heavy fighting in a region on the northeastern coast of the island. Even after a temporary ceasefire, approximately 150,000 civilians remain trapped in this eight-square-mile area. 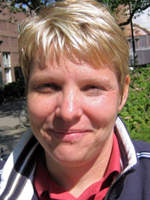 In Vavuniya, about 50 miles south of where the fighting is taking place, Doctors Without Borders/Médecins Sans Frontières (MSF) provides food in 10 camps for displaced people and works in the area’s hospital. Two MSF surgeons provide support to the existing surgical team; in March, they carried out almost 800 operations. Most of the cases involved people suffering from bullet or grenade wounds.

MSF worked in the hospital in Kilinochchi, in the middle of the conflict area known as the Vanni region, in Northern Province, until September of last year, when MSF was forced to evacuate. We had been busy starting to provide help to displaced people when the government announced that all aid organizations had to leave the area. Last year around this time we could see the situation had worsened. From our base in Vavuniya, near the southern frontline, we could hear shots fired every morning and evening and artillery going off—back and forth. It started getting worse in April, and in May, the frontlines moved up. And what did the people do? They fled, traveling with the frontline, to the north. That’s why they had to flee again and again, sometimes as many as five or six times.

“People arrive in a complete state of shock”

The people from the Vanni region who arrived in Vavuniya this past February were brought here by the army. All day long you could see red army buses riding back and forth. Then no one came from the region for weeks. Later, patients told us that they couldn’t flee before they did because the LTTE prevented them from going. It was only in the middle of March that another busload of people appeared again. The people arrive in a complete state of shock. They tell how they sat in bunkers for weeks, seeking shelter from the bombs. Often, they have crossed over the frontline at night—in groups—at great risk to their own lives.

Approximately 50,000 people are now sitting in improvised camps in and around the city of Vavuniya. Try to imagine it: 30 people packed tightly into a classroom or a cricket field full of huts. The camps are surrounded by two rows of barbed wire, with about six feet between them. People outside and inside the camps look at each other, trying to recognize relatives. Some 80 percent of Vavuniya’s population is also Tamil and they have not seen their families for years. However, there are no lists showing who is living in which camp. The people are not allowed to leave and they cannot have contact with the outside world.

A woman approached me. Her children were away at a boarding school in Mannar, on the western coast. She had not spoken to them in two years and her children did not know if she was still alive. I gave her my mobile phone so that she could call them. I will never forget her relief after she was able to reach them. We have heard the most terrible stories. There was a 15-year-old boy—when the bombs fell, six members of his family were killed instantly and he lost his arms. He said to one of our staff members: “Do you perhaps have new arms for me?”

“Can you help me? I am looking for my child”

Our teams go to the camps every day. We cook porridge and distribute it, especially among young children and pregnant women. We provide a kind of distraction for many people when we are there, a moment of human contact. People are extremely upset. They ask, “Can you help me? I am looking for my child.” “I am searching for my husband.” “Do you know who is in the other camps?” I spoke to a woman who had eight children. She had been separated from her husband. Her eldest child, age 17, and her youngest, only four months old, were both dead. Her 15-year-old son could no longer speak. They come up to you, hold you tight and begin to cry. The fear is deep inside of them.

The people that are still living in the conflict area must be in a desperate state. They are stuck in an area consisting only of beach and jungle. In March, it rained for days; the water came up to people’s knees. The chance of diseases spreading just increases. It is so frustrating that we cannot get permission to bring medical help to this area. I know that this is an ‘internal’ conflict that isn’t high on the geo-political agenda and that this war has gone on for almost 25 years, but it has never been as bad as it is right now. The war is being carried out above the civilians’ heads. Yet every day airplanes full of tourists continue to arrive. Once when I was returning to the capital Colombo from Europe, the plane’s purser said during the landing: “Welcome to paradise.”