While tens of thousands of people remain trapped in the combat zone, around 200,000 people have been able to flee and settle in camps for internally displaced persons in the Vavuniya District of Sri Lanka's northeast. 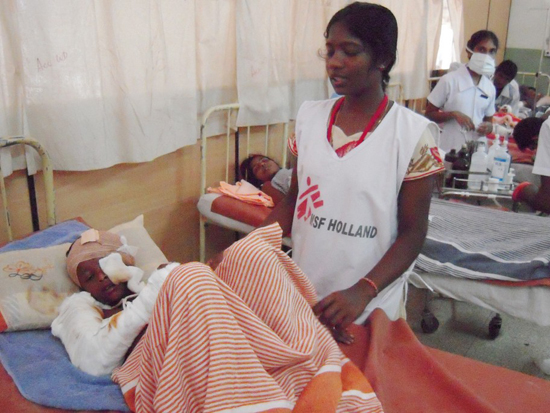 "They were arriving in terrible condition, with nothing or just a few possessions in a plastic bag or bundled up in a piece of clothing." Voitek Asztabski, MSF project coordinator in Vavuniya.

While tens of thousands of people remain trapped in the combat zone, around 200,000 people have been able to flee and settle in camps for internally displaced persons (IDPs) in the Vavuniya District of Sri Lanka's northeast. Doctors Without Borders/Médecins Sans Frontières (MSF) teams continue to provide surgical support in Vavuniya Hospital and deliver supplementary food to displaced people living at camps in Vavuniya and Manik Farm.

Last week, MSF signed an agreement with the Sri Lankan authorities to set up an emergency field hospital that will act as the main referral hospital for the 120,000 displaced people living in Manik Farm.  MSF has also obtained agreements to start post-operative care in Paimpamadhu Ayurvedic Hospital, which treats patients discharged from Vavuniya Hospital.

However, Vavuniya Hospital has seen an increase in the number of sick and wounded patients coming from the IDP camps compared to previous weeks; in the last week, 1,179 people have been admitted.

The MSF surgical team—expanded to three surgeons and an operating room nurse—together with an increased Ministry of Health staff, has performed a total of 212 surgeries in the past week. Most of the operations involved wound infections, amputations that required further surgery, skin grafts, and occasional reconstructive surgery. Eighty-four MSF staff work around the clock, helping patients with basic needs such as cleaning wounds, eating, dressing, and going to the bathroom. They also visit the wards on a daily basis to distribute non-food items, such as sheets, travel bags, flasks, plates, clothes, diapers, and cash donations.

At Manik Farm and the five transit camps in and around Vavuniya, MSF teams distribute supplementary food (high energy meals) to children under five years of age, lactating mothers, pregnant women, and vulnerable groups such as the elderly and the handicapped. Over the past week, MSF distributed a total of 110,402 portions of supplementary food.  Over the coming week MSF will also begin to provide fortified therapeutic ready-to-use foods to malnourished children under the age of five, and to pregnant and lactating mothers living in Zone 2 of the Manik Farm camp.

Hundreds of patients are in need of post-operative care.  Unfortunately, some patients are being discharged to secondary level hospitals or back to the camps and are therefore unable to receive the full post-operative medical care they need. Over the coming days, an MSF team will begin post-operative care activities in the Paimpamadhu Ayurvedic Hospital near Vavuniya. Patients in Vavuniya Hospital who require post-operative care will be transferred there, where MSF medical staff will perform minor surgical procedures, wound care, and physiotherapy.

In addition to the medical activities in Vavuniya District, an MSF surgical team provides surgical support in the ministry of health’s Point Pedro Hospital in the Jaffna Peninsula. MSF has a total of 27 international staff and 343 national staff currently working in Sri Lanka.