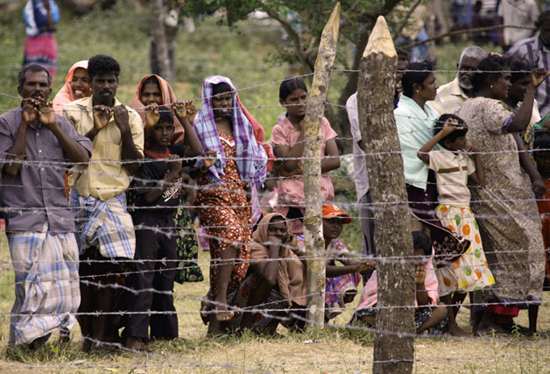 Displaced people look through the barbed wire that borders a camp at Menik Farm.

While Sri Lanka’s Ministry of Health has set up a system to provide initial treatment to the wounded and sick people in displaced persons camps, the needs remain immense, requiring around-the-clock medical presence in the camps to respond to all emergencies. Doctors Without Borders/Médecins Sans Frontières (MSF) is ready to scale up surgical and medical care inside the camps if authorizations are provided

“We have lots of infected war wounds that have been poorly treated. For some wounds the treatment is coming weeks later, for others it is months later.”

An inflatable MSF field hospital is currently the closest referral hospital for the 220,000 displaced people living in Menik Farm camp in northern Sri Lanka. Along with six hospitalization tents, the hospital is equipped with two operating theatres and an intensive care room. The MSF medical team working in this hospital is currently treating war-wounded patients and those suffering from pneumonia and other severe respiratory infections, as well as dehydration caused primarily by diarrhea. The 100-bed facility received its first patients on May 22 and its first surgical cases on May 26.

Ambulances arrive from the five zones of Menik Farm camp bearing some of the displaced people in need of hospitalization. Around 70 patients lie on their beds under the white tents of the MSF field hospital, just across the road from Menik Farm.

In the operating theater, MSF surgeons are performing six to 10 minor surgical procedures every day on people suffering from injuries caused by shell blasts, gunshots, or accidents. MSF surgeons remove dead and infected tissues from wounds—several times if necessary—to try to avoid amputations “We have lots of infected war wounds that have been poorly treated,” said Dr. Mike D. Newman, an MSF surgeon. “For some wounds the treatment is coming weeks later, for others it is months later.”

In the tent full of patients, a woman with a bandage around her head waits to be examined. Selva* was injured in the Vanni, the former conflict zone, on the May 19. Her husband and elder daughter were also wounded. They wrapped some clothes around their wounds to stanch the bleeding. The next day, they managed to reach the Omanthai crossing point to escape the fighting, and the army told them to go to the onsite clinic. But Selva refused, afraid that if they became seperated her family would be loaded onto a bus and taken to the camps, effectively separating them. Two days later, once she was in a Menik Farm camp, she sought care in the overcrowded camp hospital. It took another two days for a doctor to treat her and refer her to the MSF field hospital, by which time her wounds were infected.

Next to her bed, an 18-year-old boy has multiple injuries: three-month-old bullet wounds in his arm and shoulder and one-week-old shrapnel embedded in his knee. With a homemade bandage around his knee, Dilan* walked for two days out of the battle zone, before being sent to the Menik Farm camps with a dressing over his knee. Still in great pain, he went to the camp hospital, where his dressing was changed and he was given some medicine. But over the following three days he received no follow-up care. Though the medicine eased the pain, an infection was spreading. Eight days after his injury, Dilan arrived at the MSF field hospital.

There are probably hundreds of people like Selva and Dilan who have not received the close medical follow-up that war-wounded patients require. Though Ministry of Health doctors working in the camps are doing their best to cope with the number of patients, there is a need to provide a 24-hour service where war-wounded patients and other medical emergencies can be identified, treated, and referred to the field hospital as quickly as possible. MSF has the capacity to scale up these services in the camps and continues to pursue discussions with the authorities in Colombo.

Dipesh*, 37, is a patient at the MSF field hospital. Since he was wounded over a month ago, Dipesh has been going from one medical structure to another looking for treatment.

He has been unable to walk for a month, and cannot help his wife and two children as much as he would like, but now he is finally undergoing surgery.

Dipesh was injured on April 20 while escaping from the Vanni, the now former battle zone in Sri Lanka’s north. With a large, deep wound on his right foot, he continued to walk and managed to cross the frontline. At the first crossing point, the army bandaged his foot and told him to ask for medical care at the main crossing point in Omanthai. But the crossing point was extremely crowded, and he was sent straight to a camp without seeing a doctor. Once in the camp, Dipesh asked again to go to the hospital but no authorizations to leave for medical care were given before the registration process was completed. It took four days to be registered and only then was he referred to the hospital in the nearby city of Vavuniya.

A surgeon in Vavuniya hospital cleaned his wound for the first time, almost a week after Dipesh had reached the government-controlled area. But no follow up was possible as the hospital was too crowded and Dipesh had to go back to the camp. That same day, May 2, all the displaced people in his camp were moved to a camp at Menik Farm.

In Menik Farm, it took him four days to see a doctor as the clinic in the camp was so crowded. The doctor was obliged to refer Dipesh to another hospital, because the wound was too infected. For three weeks, from the May 9 to 27, Dipesh went every other day to a hospital in Cheddikulam on a bus provided for patient transfer, in order to have his wound dressed. On May 27, he was referred to the MSF field hospital outside Menik Farm, which had just begun surgical activity. Today he is receiving a second wound debridement for his injury.

When he wakes up after the surgery he anxiously asks “How did it go?”

“It’s not that bad now; it’s improving,” the surgeon answers after opening Dipesh’s bandage. The wound is far from healed, but the infection is under control.

* Names have been changed