MSF is concerned about an interview suggesting that it was present in 2009 in Sri Lanka's war zone. 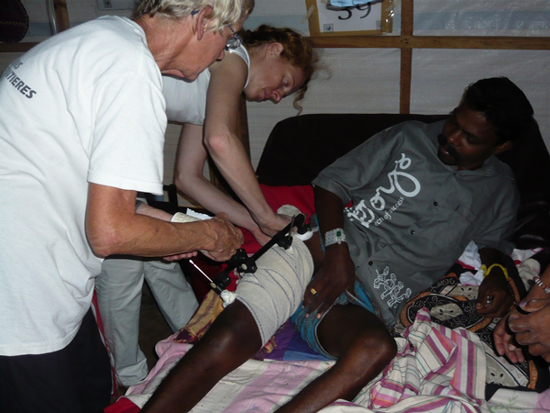 MSF staff in Menik Farm tend to a wounded man displaced by fighting.

PARIS/COLOMBO—The medical humanitarian organization Doctors Without Borders/Médecins Sans Frontières (MSF) is concerned about an interview suggesting that it was present in 2009 in Sri Lanka’s war zone and that it received surrendering militants to be treated.

MSF made numerous requests to the government for access to the battle zone in northern Sri Lanka and these requests were repeatedly denied, despite MSF’s extremely serious concerns about the fate of civilian populations who were trapped in the heavy fighting.

In this interview published in India on February 6 and reproduced in the Sri Lankan media, Sri Lankan secretary of defense M. Gotabaya Rapjapaksa is purported to have said that MSF-France teams were present in the battle zone during the fighting.

“ . . . Mr Gotabaya said international agencies, including the French MSF (Médecins Sans Frontières ) and the Indian medical team, were present in the battle zone to receive survivors and surrendered militants.”

Ahead of the final offensive, in September 2008, along with most other international organizations, MSF was given a government directive to leave Kilinochchi.

Thereafter, MSF repeatedly requested permission to enter the battle zones to provide medical care to the civilian population. Permission was sought from numerous ministries, including the Ministries of Health as well as Defense, but at no point was this request granted during the final stages of the conflict in late 2008 and 2009.

It is only after the end of the fighting in May 2009 that MSF was able to provide medical assistance to the victims of the conflict in North Vavuniya, and this was outside the battle zone at the Omanthai checkpoint.

MSF provided surgical support in Vavuniya hospital and in addition established an emergency field hospital for the displaced population living in camps in Menik Farm.
Again, all of this activity was outside the battle zone.

In 2012, MSF-France remains committed to working alongside the Ministry of Health to support the district general hospital of Mullaitivu and develop assistance in mental health care in Mullaitivu District.