"Our hospital has got about 450 beds, and we’ve now got more than 1,700 patients in the hospital—on the floor, in the corridors, and even outside. So the hospital is very close to being overwhelmed."

Listen to the interview with Dr. Paul McMaster:

Paul McMaster is working along with another Doctors Without Borders/Médecins Sans Frontières (MSF) surgeon and Ministry of Health staff at Vavuniya hospital in the Northern province of Sri Lanka to treat some of the tens of thousands of civilians streaming out of the Vanni, the conflict zone to the north.

Over the last few days an estimated 60,000 civilians have escaped the heavy fighting in the Vanni and many wounded have been brought in buses to Vavuniya hospital. On April 21, MSF reported treating 400 people in 36 hours, almost twice as many patients as were admitted the previous week. The following day, patients continued to arrive at these levels, said Dr. McMaster.

What is the situation at the hospital now? 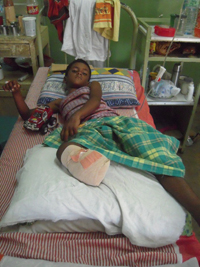 A boy who fled the Vanni area required an amputation at Vavuniya hospital.

We and our Sri Lankan colleagues have been dealing with casualties brought into us over these last few days from the conflict in the north of us. We’ve been seeing very severely wounded patients, the numbers of patients have increased rapidly over the last three or four days, so we’re seeing a stream of badly wounded people being brought into us.

Our hospital has got about 450 beds, and we’ve now got more than 1,700 patients in the hospital—on the floor, in the corridors, and even outside. So the hospital is very close to being overwhelmed.

What conditions are the patients arriving in?

About three-quarters of the injured coming in now have suffered from blast injuries, and the rest are gunshot wounds and mine explosions. We are seeing who has survived on the field and actually reached us. We see abdominal injuries, but many of the chest or head injuries we’re suspecting don’t survive the blasts to get to us.

We are doing a lot of amputations. Many of the lower limbs are severely, severely injured and blown off. So we’re doing emergency amputations and a lot of these patients we’re doing abdominal expirations, or damage to internal organs and the bowel, we’re dealing with chest injuries, draining damaged chests and lungs, and we’re dealing with some head injuries as well, but the majority of the severe head injuries don’t make it to us. Buses that bring these people down, people are dying on those buses, and bodies are being taken off the buses sometimes as well.

Are you seeing many women or children with severe injuries?

We’re seeing a lot of men with severe injuries, but we’re also seeing a lot of women, a lot of children. We’re doing amputations on children; we’re doing abdominal expirations for internal damage as well, in children. And sometimes we’re operating on both the mother and father and a child from the same family that had been wounded in the same explosion or mine. We’re seeing whole families that are wounded sometimes.

We had a young woman of about 19 who is breastfeeding that I had to do a major leg amputation on. I just wonder what the future for her life and child will be. We’re seeing children that have no parents with them. We had a little boy with a blast amputation of his leg, I think he’s about five, and he’s being looked after by his big brother, who’s about seven, and we don’t know where the parents are or whether they’re even alive. But these two little children are in the middle of a very traumatic hospital setting on their own.

In what sort of mental state do patients arrive?

Well we’re obviously seeing the critically injured and the shock patients. As I said earlier, they just lie silently waiting their turn to get the treatment. We’re dealing with critical people who need surgery urgently, and truthfully there’s little time to go further. We have people in the team who are counselors and mental officers who are working in the camps. But these are deeply, deeply traumatized people. We have children sitting in the middle of emergency wards seeing people brought in with major blasts limb injuries. And these are children, just sitting silently, emotionless, in the middle of all this, as we try to treat them and move them quickly up to the surgery or the ward.

Can you tell what the patients’ living conditions must have been like before they arrived at the hospital?

Many of them clearly have been living under very difficult conditions. They come in needing acute surgery, so are not able to eat, and certainly some of them have had little to eat in the previous days. They come with nothing; they have barely the clothes that they have on. Of course, they’re injured. The family members, if there is one, come with nothing – no pots, no pans. We and our other colleagues and organizations give them sometimes some clothes and sandals and a mattress. And we’re also feeding in the camps, supporting in the camps, thousands of children and pregnant women who need supplementary food to try to build them up again.

What are the challenges to providing care in the hospital right now?

The post-operative care is the area of main concern, really. It’s very difficult. We have a ward that I think is supposed to have 45 beds; we’ve had something like 325 patients in it. It’s extremely difficult to give any quality post-operative care, and we try constantly to pick out the ones who are at risk of infection or sepsis.

The nurses work very hard; the nurses are working 19-, 20-hour shifts. But even so, there are very few nurses to go around. And often it’s trying to pick the patient with the problem and deal with it, rather sometimes doing our full normal quality of work that we want to support these people. It is very difficult for all the staff here, who are all working very, very hard.

What do you expect to see in the coming days?

From what I hear, the numbers are likely to continue over these coming days, and could even increase. We’re making what preparations we can to receive and even larger number of casualties over these coming days. And our hope and prayer would be, of course, this stops very quickly, but I’ve seen no sign of that as yet, and I’ve not heard anything from the team or our Sri Lankan colleagues to suggest that’s going to stop any time soon.